Going Down the Road Feeling Bad: Does Quincy Pondexter need a change of scenery? 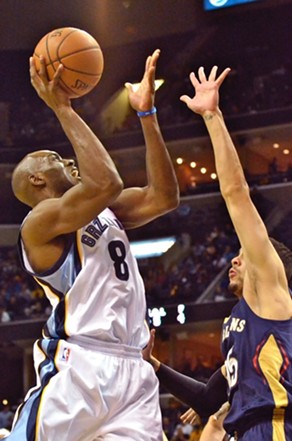 Quincy Pondexter needed to make a statement this season—needed to prove himself as a valuable part of the Grizzlies’ crowded wing rotation. After playing extremely well in the 2013 Western Conference Finals, Pondexter entered last season with all eyes on him, and raised expectations for his performance. He didn’t meet them, struggling to find his game in the first few games of Dave Joerger’s first season as head coach, and then he got injured and missed the rest of the season.

Missing the season, right after being signed to a 4-year contract, only raised the stakes of this season for Pondexter. Courtney Lee came after QPon was already out for the season, Jordan Adams was drafted this summer, Vince Carter was signed, Tayshaun Prince looked to finally be healthy, and suddenly the rotations at the 2 and 3 looked a lot more crowded than they did when Pondexter went down. He was going to have to consistently prove that he could contribute at a high level this year to get a shot.

Through the first third of the season, he hasn’t really done that. Pondexter has played in all but five games, but he’s shooting 32.5% from the floor, including 22.7% from 3, after filling Griz fans’ hearts with hope that he could be the 3-and-D Battier replacement the Grizzlies have been looking for since 2011. He’s grabbing 1.9 rebounds a game, and 0.9 assists.

Looking into the more advanced numbers, his offensive rating on the season so far is 99 points per 100 possessions, and his defensive rating is 110 points per hundred, for a net rating of –11. I’m not a huge fan of PER (sorry Hollinger) but Pondexter’s is 6.5, and that… ain’t good. Going by the good old “eye test,” Pondexter plays well with the starters when he’s forced to be a fourth or fifth option, making effort plays and camping out in the corners, but when he’s playing with other reserves, he tries to become a ball-handler and playmaker, and it almost never goes well for him.

Couple what’s happening on the court with the constant murmurs that his attitude is a problem (murmurs that started last year when he played well against Brooklyn and proceeded to cuss out Joerger on the sideline, a move that was not well-received by his teammates), and it adds up to a picture of a guy who (1) isn’t contributing much to his current team despite being given the opportunity and (2) doesn’t seem to understand how to play to his strengths and help the team that he’s on, instead of trying to be an All Star.

It comes down to this: if Pondexter isn’t contributing, there’s really not any reason for him to be getting minutes, and if he’s not getting minutes, there’s not much reason for him to be on the roster. I said in my season preview piece that of the trio of Tony Allen, Courtney Lee, and QPon, the Grizzlies only needed two. Lee started off playing at an All-NBA level and has plummeted back to earth, but even when he’s not making threes (or even taking them) he’s a decent defender, and most of the time even a good one. Pondexter doesn’t have defense to fall back on, even though he’s got that reputation. He’s done well in certain matchups (Friday night’s Houston game, he played fairly well against James Harden) but on the whole, he’s just not getting it done on that end of the floor either.

All that said: I still think that Quincy Pondexter can be a valuable player on an NBA team. He can be a rotation player on a good team—if he figures out how to play to his strengths. I feel like a broken record, but that lack of self-awareness is a big part of what has hurt him here. With Jordan Adams coming up behind him (playing in the Utah Jazz game and doing quite well for himself) and Tayshaun Prince able to help the team in a utility role, there’s just not that much room for Pondexter to be able to play his way back from whatever funk he’s in.

I think he can be good, still, but I think he might need a change of scenery to do it. Which is tough to admit, because I was one of the people who had high hopes for him last season. But that’s how the NBA works. Sometimes guys just need a fresh start on a different team to realize their potential, and I think Quincy Pondexter might be rapidly approaching that point.