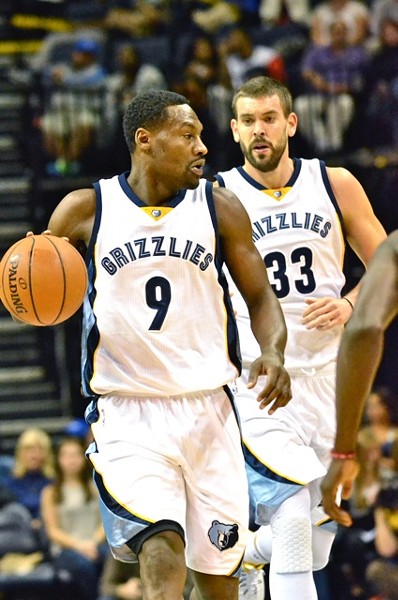 Even in the first half, you could tell something was different in last night’s 102–100 win over the Houston Rockets: the starting lineup, so starved for energy and movement since the All-Star break, looked like they were playing with a new intensity level. After missing Tuesday’s game against Utah with an illness, Zach Randolph was back in action. Marc Gasol got going early and often. Mike Conley was playing at a higher level than we’ve seen from him since sometime at the end of January.

The Grizzlies’ bench has been getting a lot of credit lately—and deservedly so. Even last night, they played a major part of getting the Grizzlies in a position where they could win the game. But to me, last night was the first game since the break that wasn’t about a great performance from the bench; it was about the Grizzlies’ big three—Mike Conley, Zach Randolph, and Marc Gasol—finally all getting going at the same time, with just enough wing defense insanity (thanks to new Lords of Basketball Chaos and/or sparring partners Nick Calathes and Tony Allen) to bring the Grizzlies an important road win against the 3rd place Rockets.

➭ Before Tony Allen’s suspension against Utah and the story being that he and Nick Calathes had gotten into it during practice, questions abounded about whether Allen would be reinserted into the starting lineup in place of Jeff Green. It seemed like if it were going to happen, a game against James Harden would’ve been the perfect time. I think the right decision there is to go matchup-based anyway, starting Lee and Green or Lee and Allen depending on who starts for the other team—and certainly Allen on Harden is the matchup the Grizzlies wanted defensively.[1]. But with Tony in the doghouse for behavior reasons, even temporarily, I would think Joerger (rightly or wrongly) will probably just keep things the way they are for a little bit longer.

➭ Speaking of our two combatants, Calathes and Allen combined for 19 points, 6 steals, 13 rebounds (and 7 fouls) last night. Playing those two at the wing spots with either Conley or Udrih and basically any frontcourt combination seems to be the Grizzlies’ recipe for defensive disruption this season, similar to the James Johnson/Tony Allen combo from last year. Both of these guys have to be so irritating to play against I’m not surprised in the least that practice got a little testy. They’re clearly over it, though, playing togehter well last night. With these two guys on the court, the Grizzlies’ defense reaches a fevered intensity that generates steals and turnovers at a very, very high rate.

➭ Marc Gasol looked more engaged last night (especially on the offensive end) than he has since the break, and it showed in his stat line: 21 points, 7 rebounds, 6 assists. His baseline fadeaway to win the game (shades of Rudy Gay hitting one over LeBron all those years ago) was especially clutch, but to me the more impressive play last night came when he and Randolph had their world-famous high/low game working at a nearly unstoppable level during the third quarter. When those two are playing that well, unconsciously sensing where the other is going to be and when the pass is going to come, there’s not much other teams can do to stop it, beyond putting four guys in the restricted area. The Rockets even tried that a couple of times during that third quarter stretch, and it only worked once.

Gasol’s offense creates so many opportunities for other players. That’s been the biggest difference in the Grizzlies this year, to me: when Gasol is being “New Aggressive Marc” everyone else gets easier baskets. If he can remember that—and not fade back into his facilitator/defender role even if Randolph gets on another hot streak—this team is poised to do some serious postseason damage.

I should probably give this to the guy who said that since taking over this blog I’m responsible for “the biggest quality drop in Memphis since Fat Elvis,” but instead, The Artist Formerly Known As MattyP90 caught this:

Another back to back: Friday night at home against the Lakers, and Saturday night on the road against the Pelicans in New Orleans. The Lakers, of course, aren’t very good this year. But the Pelicans (with Anthony Davis back in action) will probably want to continue their role as Grizzlies Kryptonite, and their starting small forward—a guy named Quincy, whom you may remember—will probably be gunning to have a big game as well.