Next Day Notes: Warriors 111, Grizzlies 107, and the Current Playoff Picture 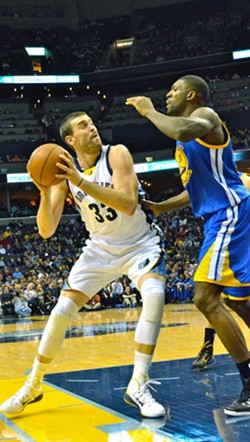 The Grizzlies lost on the road to the Golden State Warriors, 111-107, and if you just see that final score, you might assume that the shorthanded Grizzlies fought as hard and as valiantly as they could and still just barely came up short against the best team in the league, which would be an encouraging result that showed that the Grizzlies, even missing two of their best players and with a third hobbled by a bum ankle, can hang with anybody.

Problem is this: that's not what happened.

The Grizzlies rolled into Oracle Arena needing a win to keep their hopes for the 2 seed alive, but missing Mike Conley and Tony Allen again and with Marc Gasol hampered by an ankle injury he suffered early in Saturday night's game against the Clippers. They faced difficult odds—especially since the Warriors needed a win to ensure they wouldn't face the Spurs until the Western Conference Finals—and many (present company included) wondered whether they should even try to win or instead focus on resting who they can rest until the playoffs start this weekend.

It didn't go well. Gasol clearly couldn't move very well, and without Mike Conley and Tony Allen's defense, the Grizzlies struggled to contain the Warriors from outside in the first quarter...

...and then in the second quarter, Klay Thompson turned into a white hot ball of burning hydrogen and helium and scored 26 points on 10-13 shooting, including 6-7 from 3 point range. The Grizzlies by that point were trying to guard him with Jordan Adams, and even though Adams is a credible defender for a rookie, guarding the second-best shooter in the league (second only to his teammate Steph Curry) doesn't go well for the best of the best, so it really went poorly for Adams.

Part of it, of course, was the same terrible 3-point defense we've seen from the Grizzlies all year long. Over-helping, getting punished on the weak side. The problem was exacerbated by Adams' inexperience and also (mostly) by the fact that Thompson only needs about two feet of space to get a shot off. Even when he's guarded by a guy like Tony Allen, Thompson can take and make a 3 in the time his man looks away and looks back. Add that to what has already been a lackluster off-ball perimeter defense for most of the season, and you have a quarter like that.

By halftime, the Grizzlies were down 68-46. At the end of the third quarter—a quarter in which Steve Kerr played Warriors starters for 10-ish minutes, and played Curry for 12 minutes because how could he possibly get injured two games before the playoffs?—they were down 93-66.

Of course, Dave Joerger decided a 30-point deficit was no reason to sit his injured All-Star Center, and played Marc Gasol and Zach Randolph together for 7:31 pointless, stupid minutes in the quarter, even though both of them were playing at something close to a 20% effort level, knowing ("knowing") the game was out of reach and deciding to rest themselves by not boxing out and not running the floor since the coach didn't seem to think it was a good idea to take them out. While the Grizzlies continued to sink farther and farther into the blowout, Randolph was 0-2 in the third and Gasol was 0-1. Good thing Gasol had to run around on a bad ankle for those 7:31; it really closed the gap.

They weren't the only ones not playing well, but most of the other Grizzlies at least looked like they were trying. Vince Carter continues to look like dead meat, shooting poorly and taking poor shots for the most part even when they go in. Beno Udrih was 3-12 from the floor and could barely slow Curry, much less contain him. Jeff Green—another Grizzly playing through injuries, this time back spasms—was 2-6 in 21 minutes and didn't attempt a free throw.

Every single normal Griz rotation player who played in this game got absolutely demolished. It was not close; there was not ever a suggestion that it might become close. This was a team who wasn't sure they'd win coming in, who decided at about the five minute mark that they didn't have a chance, completely shutting it down while the other team continued to play at a high level of intensity and kicked them repeatedly while they were down. 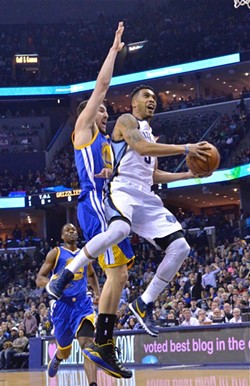 The fourth quarter was when Steve Kerr finally sat out his starters, and Joerger did the same. Koufos, Carter, and Calathes all logged minutes in the 4th (Koufos played 8 minutes) but the real stars of the show were the rookies (and Jon Leuer, who's mostly been squeezed out of the rotation since Vince Carter returned from injury): Russ Smith, Jordan Adams, Leuer, JaMychal Green, and Jarnell Stokes.

Instead of coming out in garbage time and throwing the ball around trying not to lose by more than they already were (which was almost 30 at the start of the quarter), the rookies came in and played solid basketball against the Warriors third-string guys. Neither team was planning on putting the starters back in, and there wasn't anything they could possibly to do make the game worse, and in that moment, something incredible happened: they went on a monumental run.

Russ Smith had 16 points on 5-8 shooting, made all 5 of his free throws, and logged 4 assists and a steal. Jordan Adams didn't shoot as well (5-16 for the game, but 4-7 in the 4th) but finished with 19 points, 2-5 from 3, 5-7 at the line, 2 rebounds, 2 assists, and 2 steals. Jarnell Stokes had 7, but he also played tough defense and stole an inbounds pass. JaMychal Green didn't score much but played a solid game, showing promise as a future backup big man. All told, the Grizzlies' scrubs, the guys who can't get off the bench, hung 41 points on their Golden State counterparts, and once the game got into the last minute intentional foul portion, had a real chance to win it if the ball took a lucky Grizzlies bounce or two. If they'd had another 60-90 seconds to play, they almost undoubtedly would've closed the gap.

They didn't, and they were playing against the guys who never get off the Warriors bench, either, but it was still an encouraging sign for the Grizzlies' future: rookies! More than one! Who can actually play basketball!

I can only assume that these guys—especially Adams, Stokes, and Smith, but also Green—are going to figure much more prominently in the Grizzlies' second unit next year, as they develop and as the team starts to feel them out to see who will be the rotation guys for the next 3-5 years. Last night, they took a bleak game and turned it into an entertaining one, reminding us all how much fun it is to watch a team of guys learning on the fly (remember the early Lionel years?) and surprising themselves by what they accomplished.

I'm not ready to crown these guys The Future Of The Franchise based on one performance against the Warriors' scrubs, but I did think it showed real heart to do what they did last night after being thrown into a pretty rough situation. They kept last night from being almost unbearably bleak, a continuation of the intermittent misery of the last few days (weeks) (months) of Grizzlies basketball. So that was all right by me.

BREAKING: State of Tennessee has declared that all those Grizzlies license plates issued today can be redeemed for Purple Heart plates.

I think I'm doing this playoff math correctly, but it's maybe the most confusing seeding picture I remember seeing: A win Wednesday night and a loss by the Rockets and/or Spurs means the Grizzlies are the 5 seed and play Portland in the first round with home court advantage. A Grizzlies loss to the Pacers means they're the 6 seed.

If the Grizzlies lose and fall to 6th, they're more than likely play the Clippers in the first round (and LA will have home court advantage), which is just what I need to have a nervous breakdown just in time for summer. If the Clippers win while the Rockets and Spurs both lose, though, the Spurs fall to 3rd and the Grizzlies have to play them in the first round (in which case the nervous breakdown will come much more quickly).

There are a couple of scenarios in which the 6th-seeded Grizzlies play the Rockets in the first round: a Clippers loss coupled with San Antonio and Houston both winning means the 3/6 first round series will be Houston/Memphis regardless of whether the Grizzlies win Wednesday night or not.

Like I said yesterday: we still don't know anything. Grizzlies/Clippers III, much like Teenage Mutant Ninja Turtles III, is a sequel that nobody wants and nobody will enjoy, but that's the most likely outcome at this point (ESPN's latest projections put the odds of that outcome at 40% or so). The next most likely outcome is Grizzlies/Trail Blazers as the 4/5 series. Grizzlies/Spurs and Grizzlies/Rockets are both fairly unlikely but also both still on the table, and who knows what will happen on Wednesday.

If there is good news, it's that the Grizzlies are the late national game and should have a good idea of what's happening by the time that game starts, so if it's a meaningless game, they can just play the rookies the whole time while everybody else goes back to the locker room and has a beer and puts ice on whatever is injured. But until the end of Wednesday night, we still have no idea where the Grizzlies will be seeded or who they're playing.