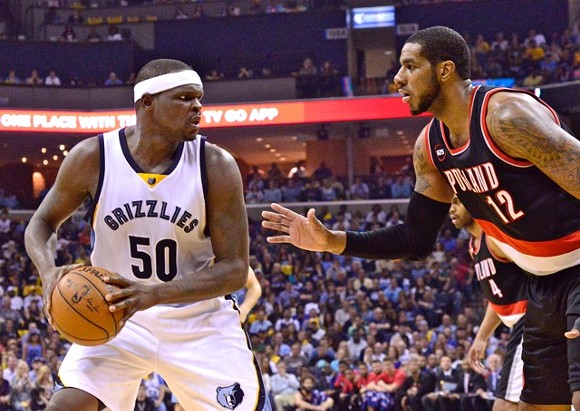 Zach Randolph sends up a jab-step jumper over LaMarcus Aldridge. The ball hangs in the air for uninterrupted minutes, like it's not coming back down. Eventually it finds its way into the rim and through, but Randolph isn't watching anymore. After taking the shot he hops backwards on his back foot, his other leg still out in front, Dirk-style. He is turned to face the Portland bench. He is addressing them directly. I cannot hear what he's saying, but he's already said it by the time the ball goes through the hoop.

There were times in Game 5 when it looked like the Grizzlies were in real trouble—trouble of throwing away Game 5, throwing away the 3-0 lead they built up in this series, maybe becoming the first team ever to lose a playoff series when leading it 3-0 (though, given Mike Conley's absence, it would be easy to explain away, easy to asterisk). Portland had finally figured out large portions of the matchup problems that plagued them so badly in games 1 and 2: the new Wonder Twins of Meyers Leonard and CJ McCollum were causing serious problems on both ends of the floor, Beno Udrih was getting cremated alive by McCollum and whoever else he had the misfortune of trying to guard, Jeff Green couldn't hit a shot, and nothing was working.

The Grizzlies barely strung it along into the 4th quarter with a 2-point lead, 68-66. It was anybody's guess whether they'd be able to pull out the Game 5 win, with Portland scoring at will (well, mostly CJ McCollum scoring at will; McCollum had 33 points on 12-20 shooting, including a mind-melting 7-11 from beyond the arc) and the Grizzlies' offense (mostly helmed by Beno Udrih at that point) was barely operational, and the defense even less so.

And yet: Jeff Green started hitting shots when he hadn't all night. Vince Carter continued his "quality over quantity" policy and hit an insane (Vinsane, I guess) baseline fadeaway as the shot clock expired—the very same Vince Carter who looked like he wasn't going to be able to step it up for the playoffs, who looked completely done. Prior to the fourth quarter, he had a dunk that looked like something he would've done in 2002, and a putback that kept the Griz from falling into a long scoring slump with Portland on the rise. He was 4 for 10, but they were a good 4, holding off the relentless advances of time and injury for another night, another series. The tone of the extremely physical LaMarcus Aldridge/Zach Randolph matchup darkened considerably as the two stopped playing basketball and started to act like they had to fight to the death, winner goes to the second round. Everything for the Grizzlies tightened up, clamped down, held on for dear life with Mike Conley sitting in a luxury box with his eye swollen shut and a face full of titanium.

When Conley was on the big screen, waving to the crowd with one good eye, the crowd roared in deafening recognition of one of their heroes. From then on, though Portland kept fighting, it wasn't their game to win, it was the Grizzlies' to lose, and they held on. Through every little explosion of fervor and physicality and Memphis Playoff Basketball, they held on.

Late in the first half, Vince Carter finds himself with the ball just inside the 3-point line and stares at a Portland defense daring him to do something. He's already between the basket and his man, Damian Lillard, and Batum and Leonard stay home on Lee and Gasol, watching Vince like they're waiting to see what he's going to do, whether he can do anything. There's enough of a lane to drive between them, and with Aldridge and Z-Bo wrapping each other up and shoving each other there's no one under the rim. By the time Meyers Leonard realizes that Vince Carter is driving past him it's too late for anyone in a black jersey to do anything about it. Carter takes off from outside the restricted area and slams it home. It takes the crowd a split-second to react, because no one believes that Vince really did what Vince just did.

This needs to be that game in the playoffs that Vince Carter wins for you.

Few have been harder on Vince Carter than I have this season. If we're honest, he's had a tough year, hurt most of the time, playing well for a week and then dropping back off the cliff. There have been large stretches where it has looked (due to injury, age, conditioning, whatever) like Carter stayed in the league one year too many, unable to will himself to do the things he wants and needs to do to contribute.

Vince Carter was huge last night, on offense and on defense, and he did it without having a stat line that looks any different from any other night this year: 9 points, 4 of 10 shooting, 0 for 3 from 3-point range, 5 rebounds. But it was those four baskets: even now I can distinctly remember three of them. Flying in for a two-handed putback dunk. The aforementioned drive and slam that no one expected him to do. The fadeaway mentioned earlier, a shot that I'd have mocked him for not two weeks ago.

The cliché was that Carter was brought in to win playoff games, and that nothing he did in the regular season mattered much one way or another—it was all about April, and now May as well. I didn't buy that. I thought it was important that he contribute desperately needed shooting and scoring (after all, last year's Dallas model of Carter would have immediately been the best offensive wing player on the team), and important that he be integrating himself into the offense and the system.

What we're seeing now is something different: a guy who knows the importance of the moment and is playing with something else in mind: doing whatever it takes to win the game. Carter played excellent defense at times last night. He almost always made the right pass or the right play. He still chucked up some terrible shots, but they were understandably terrible shots for the most part, not setting fire to precious possessions like they're checks from Caddy for Ms. Quentin.

Vince Carter made a difference in Game 5 last night, and at every step of the way he was defying a body that has betrayed him this season, and you could tell it every time he moved. 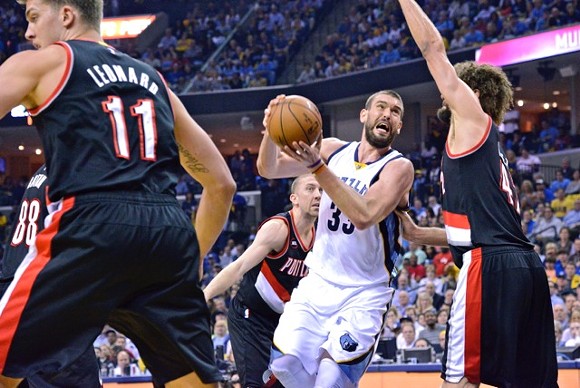 With a three point lead and 2:48 left in the first half, Jeff Green enters the game for Nick Calathes. Beno Udrih has been getting torched by Lillard and McCollum both, but with Calathes on the floor the offense isn't working. Instead of choosing a poison, Dave Joerger finds the Third Way: Courtney Lee will be the "point guard," which means, really, that the Grizzlies play the last three minutes of the first half of a playoff game—an elimination game—without a point guard. From the time that Green checks in and Calathes goes to the bench, the Grizzlies extend their lead from 3 points to 7.

Sometimes when the Grizzlies are ahead and things are breaking their way in a game, it's easy to lose sight of just how hard things always seem to be for the Grizzlies. Every single basket is the basketball equivalent of oil shale, scraped out of the ground and processed within an inch of its life just to extract anything useful from it, anything of value at all.

The way things are in games is also the way things are in a macro sense. The Grizzlies were second in the Western Conference until the last week of the regular season, when they fell to 6th and rose to 5th and it seemed for all the world like they were headed back towards a Clippers or Spurs first round. They couldn't just coast into the playoffs with a 2nd seed that had been wrapped up for months.

The way things are in the season is also the way things are in a macro-macro sense. The Grizzlies play in the poorest market in the NBA and one of the poorest metro areas in the country. Players give away tickets by the hundreds just so people can see one playoff game that they can't otherwise afford, and people stand in line for hours just to try to get tickets, not able to see the front of the line, just praying they're not number 501.

Most of the time it doesn't feel like these three levels of reality are related, until the playoffs. When everything gets harder anyway, the truth shines through: the Grizzlies wouldn't know what to do with themselves if everything weren't a life-or-death struggle. We, those of us who watch them, wouldn't know what to do if they were so good they never had any struggles. Remember November and December, when the Grizzlies were the best team in the league? Remember how strange that felt, like you (1) didn't believe it was actually happening and (2) were just waiting for the other shoe to drop and bring with it some precipitous decline?

That's the way we are as a city, too. Somehow we've created a basketball team that mirrors our strengths and weaknesses. The self-sabotage. The shining moments of transcendent brilliance. The sense that if things don't go our way, we'll just fight somebody. The refusal to perform at the highest level without facing dire odds, impossible circumstances. The possibility that it's not just something that happens during a competition but that we're actually insane.

18,100 people chanting "Whoop that trick" at the Portland Trail Blazers while television audiences across America shudder in non-recognition. Who are these people? How is it possible that they are like us? That's the same feeling the Grizzlies inspire in their opponents. It's not fear—it's a recognition that their flaws can be exploited, that they can be beaten, that they are vulnerable, but to exploit those vulnerabilites one will have to be willing to endure a physical confrontation bordering on unbearable.