It was another echo of last year’s first-round series against the Oklahoma City Thunder. The Grizzlies were playing too flat, too relaxed, and the crowd—mostly because of the 8:30PM Monday start—was a weird mixture of anxious and dazed, starting the game even louder than they’d been in Game 3 and then slowly fading away as the game rolled on and the Warriors’ lead increased in number and psychological impact. Much like last year, the Grizzlies now have three games to win two, and two of them are going to be in the other guys’ building.

What wasn’t an echo of last year’s series was the way the Grizzlies lost, and that’s what worries me the most for the Griz: the game(s) that tonight most reminded me of was the 2013 Western Conference Finals against the San Antonio Spurs. In that series the Spurs did three things that gave the Griz so many problems that they couldn’t manage to win a single game:

1. Make Tony Allen shoot three-pointers. In 2013 the situation was even worse, because the Grizzlies’ starting lineup featured Allen and fellow non-shooter Tayshaun Prince, essentially forcing the Griz to play 3-on–5 on offense (much like the Allen/Nick Calathes lineups in Game 1).

But it’s still a problem. Early in Game 4, the Warriors guarded (“guarded”) Allen with Andrew Bogut—who was really camping out with one foot in the restricted area for 2.9 seconds at a time—and the results were ugly: Allen jacked up three three pointers simply because he was open, without pausing to think “maybe there’s a reason I’m open,” burning possessions and giving the Warriors runouts on the defensive rebound. Allen didn’t once think to drive and kick, or wait for someone else to come to the ball: he just shot it, and bricked all three of them.

2. Attack Zach Randolph in the pick-and-roll. Z-Bo’s defense was pretty good in games 2 and 3—much better than usual and it’s usually decent—but it’s still not good enough to guard Steph Curry in these situations. This is exactly (exactly) what the Spurs did in 2013: Zach Randolph is the weak link in the Grizzlies’ defense, so attack him relentlessly all night long. It was Tony Parker then, it was Steph Curry in Game 4, but the result was the same: a worn out Z-Bo who was getting torched at one end and clobbered at the other. 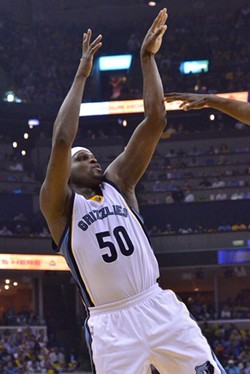 3. Double the Grizzlies’ bigs every time they touch the ball. This is a function of #1 as much as it is a strategy in and of itself, but nonetheless, it works: when there’s an offensive player on the floor that the Warriors’ defense could ignore, they sent that extra man into the paint and boxed Zach Randolph out with two and three guys at a time. It worked. They doubled Gasol, too, which led to a pretty hilarious Gasol/Curry jump ball at one point in the first half.

Okay. So what the Warriors did was effective and it kept the Grizzlies from being able to do very many of the things that made them successful in Games 2 and 3. So what? Don’t the Grizzlies just have to figure out how to adjust?

Yes, but that’s the problem: what adjustment do you make for having to play a guy who can’t shoot because he’s so important to your defense? And a guy who isn’t useful on offense unless he can cut to the basket can’t do much when there are four Warriors players in or near the restricted area. So you have two options: figure out how to score with that player in anyway—something the Grizzlies didn’t do at all in Game 4, and something I’m not sure they’re ever going to do as long as this current core team is together—or you pull that player out and replace him with a better offensive player.

Which causes two new problems: (1) your best defender isn’t in the game anymore and now the league’s best offense is starting to get into rhythm and (2) the “better offensive player” you’re bringing in is Jeff Green, who up until Game 4 hadn’t had a good night on offense in the entire playoffs. He still wasn’t spectacular in Game 4, but he was solid enough, all things considered. “Solid enough, all things considered” isn’t what you want to say about the major role player brought in via trade to put your team over the top in a championship hunt, though.

So, Game 4 was reminiscent of two things that aren’t very fun to think about: last year’s heartbreaking first round loss to OKC, in which it seemed like the Grizzlies were really going to shock the NBA world and pick off the better team before the No Fun Patrol rolled in and blew them out in a home Game 6; and also the 2013 Western Conference Finals against the Spurs in which the Spurs’ Basketball Bandsaw of Death cut the Grizzlies into tiny strips in a demoralizing sweep that exposed every basic weakness of the way the Grizzlies’ roster is constructed, the only one of which that has actually been straightened out being the backup point guard spot, then a smoldering crater formerly known as Keyon Dooling. 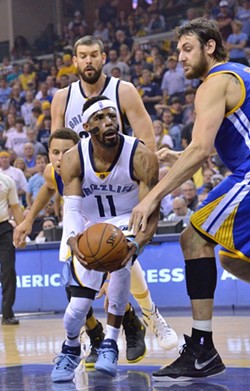 On top of this, another wrinkle: Tony Allen appeared to reinjure his hamstring towards the end of the third quarter Allen ended up playing only 15 minutes, and was visibly limping by the end of that run. To say that Allen has been the key to the Grizzlies’ masterful defensive performance in the games they’ve won is to understate his importance; most of it has started and ended with him. If he’s going to be hobbled the rest of the series, which I assume would press Nick Calathes into service as a backup Tony of some kind, the Grizzlies’ chances of winning are hampered, just like Tony’s mobility. You could argue that Tony’s mobility is the Grizzlies chance of winning.

My intent here isn’t to be defeatist about the Grizzlies’ chances. They’ve already won a game at Oracle, and there’s no reason to think they can’t do it again if they make the right adjustments. What I wonder—and what all rational Grizzlies fans have to be wondering right now, even if they don’t really want to admit that to themselves—is whether this Grizzlies team, this great and glorious Griz team, the ones who have brought us the Grit and Grind Era and all of its ensuing joys and heartaches—if they really even have the personnel or the ability to fully counteract some of this.

Getting around Bogut-on-Tony is going to require either posting someone up on the opposite block from Tony’s corner and hoping that opens up some space for a postup, or maybe running some kind of 1–3 pick and roll that uses Tony as a screener. (Bogut would be in the game while this is happening so one assumes the refs won’t be calling any moving screens anyway.) That or it’s going to require some sort of miraculous outburst of 3-point accuracy from Allen, and I’m not holding my breath.

Getting around the doubles in the post is harder. Getting around Z-Bo’s pick and roll defense is harder still. There are ways to do it, but I don’t know what they are and I’m not sure Golden State wouldn’t just counter that counter anyway.

My point is this: Game 4 was a bad one to lose, sure, but the way it happened indicated to me that the Grizzlies have an uphill climb ahead of them to win two out of their three (potentially) remaining games. The Warriors, always the better offensive team and maybe the team with the better players overall, have locked on to a strategy—a strategy first employed by Gregg Popovich, of course—that exploits the weaknesses at the very heart of who the Grizzlies are: they can’t shoot, and they run everything through their bigs.

That’s not going to change between now and Wednesday, nor should it, but the Grizzlies—now tied 2–2 and no longer holding home court advantage—are going to have to figure out how to break out of the box they’ve been put in for years now if they’re going to get over the hump against the Warriors. If they do—if they can finally overcome the Popovich Method for shutting them down—there might be no stopping them. But it’s a big ask of a team that was already the underdog in the series and now appears to have woken the MVP, worn down the already-injured Mike Conley, and maybe re-injured Tony Allen.

The Grizzlies lost more than a Game 4 on Monday night: they lost the momentum in this series. That’s going to be hard to win back, but we’ll find out Wednesday night whether they can or not.