Monday 3-Pointer: Jeff the starter, Jarnell the question mark, and Joerger the lobbyist 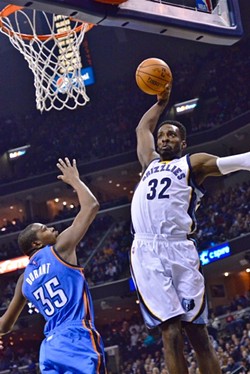 With the preseason winding down—only two games remain this week at Atlanta and Orlando, both of them on the road, before the Grizzlies' home opener against Cleveland on the 28th—I thought it was time to bring out the first 3-Pointer column of the season.

The debates are raging all around the world... or, at least, they would be if there weren't already a pretty clear consensus: Jeff Green and Courtney Lee probably shouldn't start together at the 2 and 3 spots, but it looks like that's what Dave Joerger plans on doing anyway to start the season.

On the face of it, I get it: Green is a player with a good reputation around the league (or, at least, he was) and he's coming off a whole preseason with the team to get more comfortable doing the things maybe he wasn't so good at learning on the fly last year.

If the Grizzlies' offense is going to be boosted by Green, it makes sense that that boost would be in the starting unit, where traditionally Tony Allen has started at either the 2 or 3 spot, and while Allen's cuts to the basket and his rebounding can't be overlooked, he's (obviously) a limited offensive player who can at times make things tougher for the Grizzlies at that end of the floor. So starting Green instead of Allen, together with Courtney Lee—indisputably the best shooting guard on the team at actually, y'know, shooting—would seem to be the logical move. Green's athleticism and ability to get to the rim and also to the free throw line seems like a natural complement to Lee's ability to space the floor while Randolph and Gasol go to work from the low and high posts.

There's a catch, though. It boils down to this: if you look at the lineup data from last season—the net ratings for 5-man units spread across 82 games—the Courtney Lee/Jeff Green pairing on the wings was not a good fit, and it wasn't just because of Green:

There is no lineup that the Grizzlies played in more than 20 games with a worse net rating.2 I'm not sure there are any offensive capabilites that Jeff Green brings to the table that are worth getting rolling out a starting unit that just flat-out gets outscored by the other team. And I'm not even sure Green himself is the problem—I just think he and Courtney Lee aren't a good fit together, for whatever reason. I have theories about why that's the case, but none that I've but enough thought into to feel comfortable writing them down yet.

So who should start? The obvious answer, and the one I've been saying since media day, is "dance with who brung you" and just keep starting Conley, Lee, Allen, Randolph, and Gasol. There are nights where Tony isn't going to be a good fit, though—nights where he's matched up against a spot-up shooter and not a ball handler (I'm picturing Gordon Hayward here, among other guys who Tony helps away from only to get torched). Start somebody else at the 3 those nights. Maybe Matt Barnes, though his shot hasn't come around yet. Barnes is a decent enough 3-point shooter from the corners that he has to be respected by defenders, and unlike Green his defense of other 3's is good3.

The question "What do you do with Jeff Green if he's coming off the bench" is a different one. But I think the answer to "who should start?" is clear: anyone but Courtney Lee and Jeff Green together.

I already touched on this in my recap of the OKC game but I felt like it should be explored a little more in-depth. When Jarnell Stokes was drafted in the second round by the Grizzlies last year, I was as excited as anybody. The advanced metrics loved Stokes coming out of college, he was a Memphis kid doing well, and he brought a toughness and a physicality to the frontcourt that the Grizzlies have had a hard time finding in guys whose names aren't Zach Randolph.

A year in—a year spent almost exclusively with the Iowa Energy for Stokes, except for a few stretches with the home team practicing and occasionally playing in garbage time—and I'm not sure how well he's developing. Stokes was always going to be a bit of a project—despite his strength and his athleticism, he's undersized for his position, only really 6'6" or 6'7" (he's listed at 6'9", 253 lbs. in last year's playoff media guide, but I'm not buying it) and while he certainly has the strength to hang inside with NBA players, the fact that he's just not quite tall enough is definitely a strike against him.

But Stokes' height isn't exactly something he can help. What he can help is the way he plays basketball, and I'm just not sure the Griz are seeing the development they want from him there. When he was drafted, the "future Z-Bo replacement" tag got stuck on him far too soon (maybe because he's a hometown favorite), but I'm not sure that was (1) fair (2) ever going to be his destiny. He lacks Randolph's touch and his feel for where the rebound is going to go—but so does every other power forward in the NBA. More concerning to me is his seeming lack of development. I'm not sure he looks any better in this preseason than he did last summer, and despite the fact that he had a good Summer League, as Summer League Co-MVP Josh Selby will tell you, that doesn't amount to a whole lot; in preseason he's looked aimless on the court, all the while being outworked and outplayed by former Energy teammate JaMychal Green.

Granted Green is older and has bounced around pro basketball for a while. He's had more time to (1) develop his game and (2) figure out how to determine what a team needs and then fill that role. But I don't think you can ignore the fact that Stokes' spot in the rotation is on the line and he hasn't upped his game accordingly. I'm not sure whether he can, and I'm not sure the Grizzlies think he can, either.

Here's what I don't think will happen: I don't think the Grizzlies will cut Stokes and then sign Ryan Hollins for the year. "Stokes on the roster" and "Hollins on the roster" aren't mutually exclusive, but one doesn't follow from the negation of the other, either. If anything, they might not have either one on the roster on opening night. And that would be a shame for Jarnell Stokes, but he'd probably be better off soaking up minutes on a bad team and getting a feel for real NBA minutes anyway. Practice-and-Iowa doesn't seem to be doing much for his development, and unless he shows signs of life soon, the Grizzlies probably would prefer not to tie up another roster spot with another project power forward who won't be an NBA player this season.4

There's one thing this season that stands out to me about Dave Joerger in his dealings with the media: never one to hold his tongue, this year Joerger seems much more willing to put himself out there in support of players and lobby for the things that he wants.

Example 1: the Matt Barnes story breaks—you know the one; we don't need to rehash it—and while Barnes plays it straight, with the standard "it's a personal thing and I'm focused on basketball" lines, Joerger says he "supports [Barnes] a thousand percent" and that he "loves him to death." Curious, that, but a clear example of a coach going to bat for his guy. Not sure that's something Joerger would've done last year, and definitely not something he would've done in his first season.

Example 2: After the Oklahoma City game, in the post game presser, Joerger was asked what he thought of Ryan Hollins, who had a good game against the Thunder's second unit, shooting 100% from the floor (6 of 6) and scoring 16 points in 16 minutes while making all kinds of hustle plays, clearly sacrificing his body to try to make the team. Joerger said he loved Hollins, that everyone in the locker room loved Hollins, and that he hoped Hollins would be on the team.

So here's my question, and one to which I don't really have an answer: Is Joerger just saying this stuff because it's the "right" thing for the coach to say, or does he really mean it? The Barnes deal is one thing—it's entirely possible that Joerger is privy to information about the situation that hasn't been (and shouldn't be) released publicly.

But the Ryan Hollins thing is another deal entirely. Joerger knows the deal: the Grizzlies have an awful lot of money tied up in guaranteed contracts, and they have a logjam of sorts forming at the 4. While Brandan Wright is currently the only "real" backup center on the roster, bringing in Hollins for the whole season—and I won't deny that Hollins has been good in the preseason, but over his career he's never been better than average, with a career PER of 10.9 and having never had a single-season PER higher than 13.

Should the Grizzlies go into the year with a completely full 15-man roster, with the 15th guy being Ryan Hollins? I'm not so sure.5 I think most NBA observers would say the smart thing to do is wait until you need that kind of a guy, because one will be available as a free agent. Wait until 10-day season, if you can. A guy of his quality will be available then and won't tie up that roster spot for good.

But here's my point: surely Joerger knows this. He's a smart guy, and a lot more savvy than he appears—by design. How much of his public lobbying for the team to keep Hollins around was legit? How good of an idea is it for him to be that outspoken about what he wants to the media, when the Grizzlies' whole organizational philosophy is for the discussions and arguments to happen behind closed doors so the public voice of the franchise is unified? In this case, I think he's probably playing to the crowd more than actually making a pitch for Hollins, though I don't doubt that if he's serious that pitch is also happening behind closed doors.

It is interesting, though, to see Joerger getting more comfortable in the head coaching role (after what was apparently a pretty tumultous first year and then a more stable second season) and starting to assert himself in these sorts of conversations. One wonders whether he'll continue to develop along these lines—something his predecessor Lionel Hollins was never afraid to do, even to his own detriment once the Levien regime was in place—and whether this new outspokenness is a phase, a special case for a player whom he'd really like to keep, or an outgrowth of Joerger's maturation as an NBA head coach.