The Grizzlies lost to the Spurs last night at home, 101-87, putting to rest the dreams of many that after their strong showing in San Antonio on Friday night, the Griz might be able to come out on their home court and steal one from the usual suspects in black and silver. Except it wasn't all of the usual suspects: the Spurs were without Tim Duncan, Manu Ginobili, Tony Parker, Kawhi Leonard, and David West—which was fine, because we all know by now the list of Grizzlies who are out (definitely or indefinitely) and it's a nice gesture for visitors to play without five of their best players, too, to make it a fair contest.

The grind of the post-Goon-Squad era has really started to get to me. These games are fun when they win, and mostly unwatchable when they don't—they're sloppy, poorly-executed, maximum effort and low efficiency, and those are the good games. The Grizzlies' chances are so dependent on focus and execution right now that they can't afford to come out even the slightest bit off-kilter, which they did last night, lacking focus even from the first tip. And it caught up to them.

Here are five thoughts on last night's game, and What It All Means: 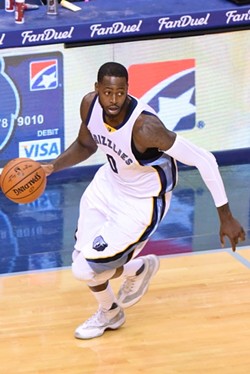 ★ Playing hard isn't good enough against the Spurs, even when they're resting some of their best players. Dave Joerger said it in his postgame presser last night: the Grizzlies just didn't look like they were very focused, and made mistakes (turnovers, especially) all night long. The Grizzlies, in the Core Four era, have always won by playing harder than their opponents, but there's an efficiency there, the inevitability of wearing down an opponent through the middle. They can't do that right now—they just don't have the personnel—so they have to keep mistakes to a minimum. At least some of the new guys should at least know a subset of the plays by now, or at least have a general idea of how they want the ball to find the basket. That has to be executed against good teams. Effort alone won't get them there.

★ There was no one to stop LaMarcus Aldridge. Zach Randolph usually makes it a point to have a big night against his former Trail Blazers teammate, but he was gone last night. He usually can defend Aldridge OK, too, and if he can't, Marc Gasol can try. Neither of those guys were available last night, leaving it to JaMychal Green, Jarell Martin (a rookie) and Ryan Hollins (my thoughts on whom are very well documented). As a result, Aldridge had 31 points in 31 minutes on 11 of 16 shooting, and pulled down 13 rebounds. Without anyone to guard him well, and without some of his best teammates, turns out Aldridge can put a serious hurting on the Grizzlies all by himself.

★ Live By The Lance, Die By The Lance. He's had some really good games lately, but last night was probably the worst game Lance Stephenson has had yet in a Grizzlies uniform. He couldn't hit anything, and was trying to freelance and get to the rim, but the entire Spurs roster knew that's what he was going to do, so every time he started to isolate, they were sending guys at him before he even stepped inside the arc. As a result, his decision-making, probably his biggest weakness even when he's playing at his absolute best, suffered mightily. It was not good. It was very bad. Hopefully it was a regression to the mean after some very good play by Stephenson and not a sign of future problems as the strain of playing 30 minutes a night against strong competition starts to become an issue.

★ I was told there would be fun. Post-Goon Squad, and I say we're Post Goon Squad because that team was supposed to have Conley, Chalmers, Z-Bo, Brandan Wright, and even PJ Hairston on it, the operative theory has been that the Grizzlies are fun to watch because they're playing without any expectations. That's really only half true, though. They're fun to watch when they're the scrappy underdog pulling off improbably victories. When they get down 15 or so and stay there no matter how hard (but sloppy) they play, the product is considerably harder to take. Last night was an example of that—one of the ugliest games I've ever watched in person. It isn't as much fun as maybe I thought it was going to be. It's a little hard for me not to see Chalmers' exit as the moment all the joy was sucked out of the room, even though there have been some good games since.

★ Watch the standings. The playoff race hasn't become a thing yet—the Grizzlies are still 2.5 games up on the 6th place Blazers and 5 games up on the 8th place Rockets and 9th place Mavericks. But they're going to have to win some more to be guaranteed a playoff spot—Wednesday's game against Denver (who just lost to Dallas) and Sunday's game against Orlando stick out as two particularly winnable contests. If they start to put together a losing streak, the playoff battle will become A Real Thing more quickly than Grizzlies fans would like to admit.

This about summed up last night:

Denver at home Wednesday, Toronto at home Friday, on the road to Orlando on Sunday, and a home game Tuesday against the faltering Bulls. The Griz really need to win at least two games out of these four, and beyond that, that Friday (4/8) game in Dallas has the potential to turn into an elimination game for the Mavs. After that, the Warriors, and, well, I don't want to think about that yet.