That was the kind of game the Grizzlies haven't had in a while: a home game in which the Grizzlies opened up a big(ish) lead on one of the top teams in the league, and held it for a while, only to have their opponent find another gear down the stretch of the fourth quarter and come back and win. Actually, it was a lot like the Grizzlies' recent loss to the Toronto Raptors, except with more Steph Curry jerseys in the crowd and more of a chance by the Grizzlies to actually win the game.

With the game on the line, trailing by one point with 8 seconds in the game, the Griz got a stop and got the ball back, with time to draw up one final play. Dave Joerger usually excels at drawing up ATO (after time-out) plays, so there was no doubt he'd come up with something great for this one, too. Instead, the Grizzlies ran an isolation play for Lance Stephenson, who went up a little too soft and missed, got his own rebound, and had to chuck another shot over three defenders with all four other Grizzlies still on the other side of the floor. You can always second-guess these things—if Stephenson had made hit first layup, we're not having this conversation because the Grizzlies probably win—but it was a frustrating end to a great night of basketball from the Grizzlies, one that renewed hope that the upcoming playoffs might not be a total bloodbath for the depleted Beale St. Bears.

The Griz have two games left—a road back-to-back Tuesday and Wednesday at the Clippers and at Golden State—and then the playoffs start on Saturday, and there are several scenarios that get the Grizzlies the 6, 7, and 8 seed, which all depend on what happens to Dallas and Utah as well as whether the Grizzlies win. It's probably not worth trying to play the matchup game—the Griz will be playing the Thunder, the Spurs, or the Warriors in the first round. We probably won't know which until late Wednesday night.

★ Xavier Munford had himself a night. Fresh on the heels of getting signed to a "multi-year" deal (which I'm told is a minimum deal for this year and next with a team option this summer) Xavier Munford tried to put the Grizzlies on his back against what might be the best NBA team of all time, and it almost worked. Munford finished with 8 points on 10 shots—not the most efficient performance offensively—but what made his game so great wasn't his scoring, it was everything else. He facilitated, he got 3 steals, he was in the right place at the right time, and the buckets he did make all felt important, keeping the Grizzlies' momentum going. It was a great night for a guy who is probably the best 10-day guy the Grizzlies brought in (with the possible exception of Briante Weber, who is now on a 3-year deal with the Heat). It's going to be interesting to see whether he's on the roster on opening night next year given the fact that Andrew Harrison will also be in camp, but that could be a good rookie backcourt.

★ Z-Bo apparently didn't get fouled. In the two games that the Grizzlies played on Friday and Saturday night, Zach Randolph attempted 39 field goals and attempted one free throw. Now, I usually don't like to complain about officiating, but anyone and everyone who has ever seen Randolph play knows there's just no way he didn't get fouled at all during the course of either game. Especially last night, with Golden State collapsing on him, hacking and swiping every time he caught the ball with his back to the basket. In a one point game, that stuff matters. Granted, the refs last night didn't call many fouls at all on either end of the floor. But again, maybe even one trip to the line for Randolph puts the Grizzlies winning 101-100 instead of losing 100-99.

★ Marc Gasol was on the bench. He can walk now, kinda. I'm not sure he should have been on the bench, cramped and uncomfortable, and walking around on crutches during timeouts. The team box has more leg room, and he can remain comfortably seated the whole time. But you try telling Marc Gasol he can be at the games but not on the bench, and let me know how that goes. 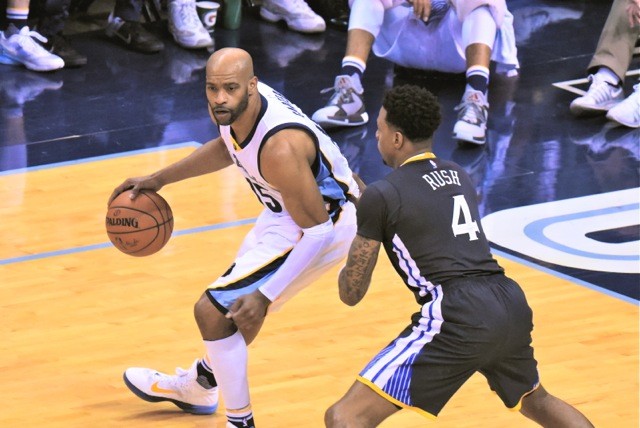 ★ Vince Carter started and played well. It was Carter's first start of the season, and he almost carried the team to victory, making shots over defenders, defending well (especially against Harrison Barnes early on), getting thrown to the floor by Draymond Green (which might qualify as elder abuse, I'm not sure—we'll check the Tennessee statutes and get back to you). It was a reminder of (1) the fact that Vince Carter: Grizzly is still a pretty cool thing even at this late phase of his career and (2) just how much better Vince has been this year than last year, when summer ankle surgery made him look like he was past his sell-by date. This year's Carter may not be able to play 30 minutes a night on a regular basis—last night, Tony Allen was out, so he didn't have much of a choice—but he can still make plays when it matters.

★ JaMychal Green vanished. He's played really well for the Grizzlies this year, but last night, matched up against the Warriors' swarming, long defenders, JaMychal Green finished 1-8 from the floor for 7 points, 4 rebounds, 2 assists, and 2 turnovers. It was an odd disappearing act for a guy whose effort has been one of the few consistent positives for the Grizzlies all season long, but understandable given his size and the way the Warriors defended him. With any luck, it's just an anomaly, and not the start of a bigger slump headed into the postseason.

While watching Xavier Munford ball, a little fun at the Clippers' expense is always called for:

The Memphis front office has added more quality NBA players in 3 weeks than Doc Rivers has in his whole GM career.

The Grizzlies are in LA to face the Clippers Tuesday night, and then in Oakland to take on the Warriors in what could be their 73rd win on Wednesday night. And then, they rest, until time to play the first round. I wouldn't be upset in the least if Tony Allen and Zach Randolph sit out both of these games to rest before the first round. They both have such a history of playing better after a week of rest. But I also doubt strongly that Randolph will allow himself to be rested for these two. We'll see.