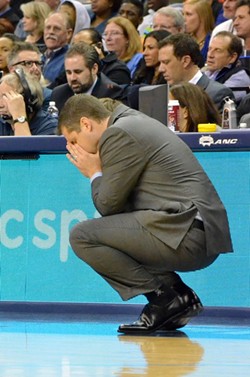 As first reported by Adrian Wojnarowski of The Vertical, Dave Joerger was fired as the Grizzlies' head coach on Saturday morning after seeking permission to interview for the head coaching vacancy in Sacramento.

To those of you who have been paying attention all year long, this probably isn't much of a surprise.

For starters, it marks the second time in three seasons that Joerger sought permission to interview for another vacancy—the first being the Minnesota Timberwolves' opening after the 2013-14 season. Given that this is an extremely critical summer for the Grizzlies—Mike Conley's free agency looms large, for one thing, but there are also several other roster spots that will need to be filled, and a real need to develop a new generation of young players to fill in around (presumably returning) Conley and Marc Gasol—it's not hard to understand that a guy who wants to be somewhere else probably isn't the guy to move forward with.

That's not to say that Joerger isn't a good coach, or that he didn't do a good job with the Grizzlies. To me, this is all about the relationship he's had with the front office—starting the season calling the roster bad, and "making himself hard to work with" (the words of one Grizzlies staffer earlier in the season) behind closed doors. As the roster started to be torn apart by injuries to Gasol, Conley, Brandan Wright, and others, the tension seemed to fade, and everyone seemed to be pulling in the same direction, relentlessly positive in the face of overwhelming adversity.

That was all undone at the Grizzlies' final media availability after they were eliminated by the Spurs. Less than 24 hours after shedding tears about how hard his players fought, Joerger was back to making comments about "the management" choosing the roster, and even said he'd be taking a vacation until July 1 and wouldn't have any input into the drafting process.

I'm not saying that's why he got fired—I think he got fired because he made it clear he didn't want to coach the Grizzlies anymore, and was trying to find another gig, and there are few things worse than a lame duck coach on the last year of his contract who doesn't want to return. It was in the best interests of the Grizzlies' 2016-17 season that Joerger be let go now.

There are good coaches available now. Frank Vogel, for one, and I wouldn't be surprised to hear some names we've heard before in connection with Grizzlies coaching in the Pera era. (That's me being vague on purpose.) It was already going to be an interesting summer, and now it got even more interesting.