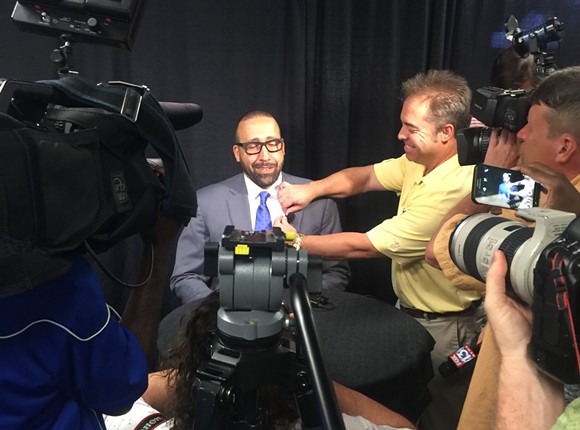 In case you’ve been hiding under a rock, today was the Grizzlies’ Media Day, in preparation for training camp and the preseason. I went, took in the sights, and noticed a few themes coming up repeatedly that seemed worth exploring in a bit of detail here.

I’ve been to a lot of media days at this point. Enough of them that I know not to get my hopes up. Guys know what they’re saying, they’ve had excellent media training, and they know exactly what notes to ring as they rehash whatever it is they’re supposed to be saying about the upcoming season. Media Day is not when you’re going to get earth-shattering news out of a team (unless you’re covering the Heat and the Chris Bosh health situation, I guess) and it’s also not a day for personality, so much. It’s a day when everybody gets on camera and generally answers the same questions.

A lot of these questions end up leading to the same answers.

As far removed as we are from last year, and as many new faces as are on this roster, the story is still health and will continue to be all season long. It sounded like Chandler Parsons and Marc Gasol both expect to be placed on some kind of minutes limitation. Mike Conley’s going to take it one game at a time. Zach Randolph also expects to rest more this year, citing the rest strategies of the Spurs and Heat as a model the Grizzlies would like to emulate. Exactly a month out from the Grizzlies’ regular season opener, Parsons isn’t even cleared for full-contact 5-on-5 yet. It’s going to be a story this year—the story, and probably even bigger than I let on in my “Ground Rules” piece. Health is going to be the difference in “second round of the playoffs” and “giving a late lottery pick to the Nuggets” for the Grizzlies this year.

This is why they’re so hard to reason about. There are still too many variables, even with only a month left. Are they going to win 50 games? Or 40? Or, heaven forbid, 30? All of those things are on the table, because beyond the Core Four, Parsons, Vince Carter and Brandan Wright–I just realized all three of those names are former Dallas Mavericks who have struggled with long, protracted injuries of some sort, and my heart sank–there’s no real depth here, just a bunch of young guys who have yet to prove they belong or that they deserve a heavier load than what they currently have.

Fizdale mentioned Heat defensive ideas and Carlisle, Stotts, and Spoelstra as coaches he's been influenced by with his ideas for this season

The vibe is definitely different this year. Guys are relaxed. The veteran players (along with everyone else, but obviously the vets led the charge) showed up to Memphis early (or, in the case of Zach Randolph and Tony Allen, they never left in the first place–there was a great quote from Z-Bo about “taking the kids to they sporting events” when he wasn’t working out) and they seem to have been communicating with incoming rookie head coach Fizdale and with each other early and often.

There seems to be a level of comfort and chemistry already forming even before camp begins tomorrow, and that’s a contrast to the last couple of years. Last year, things were tense, and Gasol (and probably others) were out of shape. Now, everyone’s lean, everyone seems relaxed and focused, and it’s hard not to think that the culture of the franchise has changed since parting with Dave Joerger and bringing in Fizdale as part of a newly reinforced Chris Wallace-centric front office hierarchy. The mood is serious, but not anxious. When questioned about the injury recoveries hanging over the roster, everybody responds with the same “I don’t know.” 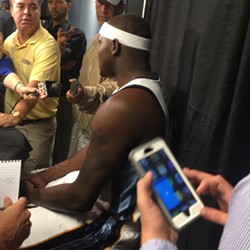 Dave Joerger was the head coach of the Grizzlies for three seasons, and two of the three years, the team stumbled out of the gate after (1) a training camp somewhere other than Memphis in which (2) a new evolution of the traditional post-focused offense was introduced. The only year they got off to a good start, they had Contract Year Marc Gasol pummeling other teams into submission and they hadn’t yet traded for Jeff Green. For whatever reason, Joerger was never really able to get a Grizzlies team to buy in to the changes he was installing, and when it went south, it went really south, with players telling reporters “we need to get back to the way we play.”

One thing I don’t think I realized until I saw all of the players on the roster with my own eyes: this is not a deep team, not by any stretch of the imagination. Who’s going to play backup point guard? (One assumes Tony Wroten won’t make it out of training camp, but he might be the most “veteran” backup PG available at the moment, which should tell you something.) What’s the frontcourt rotation going to look like, assuming Chandler Parsons isn’t ready to go for the season opener (which, look, Jordan Adams was supposed to be ready for the season opener last year, so let’s just not assume he’s back until he’s back)? Can JaMychal Green really defend without fouling?

This is really just a different angle on the health issue, in one sense. But at the same time: if an all-healthy Grizzlies starting five is Conley/Allen/Parsons/Randolph/Gasol, how do you mix-and-match those starters with these bench players and come up with a team that can play cohesive basketball? Vince Carter and Jarell Martin and Brandan Wright and JaMychal Green and Wade Baldwin and Troy Daniels… it’s going to be interesting. Fizdale has his hands full trying to figure out a philosophy to employ that works for the whole team.

And that’s without anybody getting hurt. Lawd.

It’s too early to draw any, honestly. Nobody knows how this stuff will resolve. Training camp, which starts tomorrow, will start to show the way, but it’s going to be a long time before anyone knows exactly what the Grizzlies are working with this year. Transition/rebuilding year while the big names heal up and the young guys get reps? Maybe. Yet another run to the second round of the West playoffs? Sure, barring major injury setbacks. Anywhere in between is still on the table. We’ll find out.