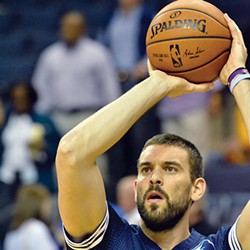 I’m excited that NBA basketball is back. So excited that I took a lot of notes at last night’s preseason game in which the Grizzlies beat the Orlando Magic, 102-97. And, you know, the Grizzlies aren’t the only ones who are throwing out a bunch of weird stuff to see if any of it works in the preseason; it’s my chance to do that to. So, this is an experiment in conveying my observations from the game without having to form each of them into a totally fleshed-out thought, lest I write 4,000 words about a game that didn’t count. A “Game Notebook” in the tradition of weird nonfiction and a bunch of stuff I read for philosophy classes in college: no particular point, just thoughts.

The first starting lineup (albeit in a preseason game without Tony Allen and Chandler Parsons) of the David Fizdale era: Mike Conley, Troy Daniels, James Ennis, JaMychal Green, Marc Gasol. How’s that for different? The rotation in the first half was a ten man unit, with Wade Baldwin, Andrew Harrison, Vince Carter, Zach Randolph, and Brandan Wright as the “backups”. There were all kinds of interesting lineups happening in there: two-PG looks with Conley and Baldwin, Baldwin at the point with Harrison off the ball, Wright and Gasol together, etc. There was not a five-man unit that played together in the first half that wasn’t at least interesting.

More than “interesting” was rookie Wade Baldwin IV. Coach David Fizdale warned in the postgame presser that there would still be games where he looked like a rookie, but last night wasn’t one of them. Baldwin looked comfortable on the court, and confident in himself, and for the most part played very well. He turned the ball over too much, and wasn’t always in the right place at the right time, but he seemed to do well both alongside Conley and running backup point.

Andrew Harrison had a rougher night, but he also spent most of the time in the first half off the ball, and had to try to guard Evan Fournier (whom I wish the Grizzlies had signed). Fizdale said after the game that he was intentionally putting Harrison in uncomfortable situations against Orlando to see how he would do, but just the same, Harrison’s discomfort was apparent at times. The Grizzlies Rookie Backup Point Guard Wars continue.

Another “new” guy who was on the team last year even though you wouldn’t know it because the previous coach never played him under any circumstances: James Ennis. Ennis started last night, and showed some flashes. Fizdale coached Ennis at Miami, so there’s a familiarity there, and from what I saw last night Ennis seems like a legit rotation player, anyway. Of course, he seemed that way to me last year before he got waived so Ryan Hollins could come back, but what do I know?

The second half gave way to preseason silliness. DJ Stephens proved he could dunk harder than anyone else, including this bit of ridiculousness:

And, honestly, he played just well enough to look like he belonged on the court. I think the odds he makes the final roster are still vanishingly small, but at least he’s already proven he wasn’t just a token signing. The crowd at FedExForum (such as it was–announced attendance was around 12,500) loved every minute of his game last night.

Perhaps most importantly, two guys seemed comfortable, and calmly determined: Marc Gasol and Mike Conley. Gasol moved well and fired away from beyond the arc (he took two 3’s, and Fizdale later said he wanted Gasol to take four), and seemed to be telling the truth when he said he felt better than he has in a long time. Conley was ever the floor general, and Fizdale even turned over the reins and let him coach for a stretch in the third. It may have seemed like a joke, but Fizdale insisted it wasn’t: he wanted Conley to become comfortable as a vocal leader of the team. This kind of coaching, this relaxed emphasis on communication and on growth, feels qualitatively different from the Hollins/Joerger coaching tree, and it’s going to be fascinating to see this team gel over the course of the next five preseason games.

Clearing the pipes and debating whether to do one of these for every single game this year:

Things that bring all joy:
Jeff Green is on the Magic
Not on the Grizzlies