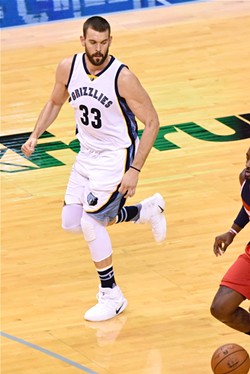 Capping off a disappointing weekend of Grizzlies basketball, the home team fell to the Portland Trail Blazers yesterday afternoon, 100-94. It was the first time Ninety-Four Million Dollar Man Chandler Parsons took the floor in Beale Street Blue, and he mostly played like a guy who hasn’t been on the court in months.

The good news out of this weekend’s games, other than the fact that Parsons’ legs work and he is actually able to use them to do basketball things (albeit stiffly), is that even with all of the teething troubles the Grizzlies are having, they’ve still been in competitive games with some of the best teams in the Western Conference. It’s easy to find small things that would’ve made big differences in the last two games. If Marc Gasol doesn’t go 1-10 in the first half against LA, the first half deficit is likely more manageable. In last night’s game, Chandler Parsons looked so rusty that at times I couldn't tell if it was Parsons on the court or the hulking underwater remnants of the Titanic. But if he goes 3-8 from the floor rather than 0-8, we’re more than likely breaking down a win and not a loss. Individual performances matter a great deal, and if those guys don’t have bad nights, the Griz are likely 5-2.

Which is not to say that’s an excuse, or that the Grizzlies don’t have real problems. Here, I made a list of those problems:

Why I’m Not Worried

No one’s ever accused me of being too optimistic. But in spite of all the problems I listed above, I’m really not concerned about where the Grizzlies are right now. I firmly expected there to be issues they’d have to work through—issues with health, issues with learning the new schemes that come along with a new coach from another organization, issues with learning how to play with each other, issues with young guys figuring out how to be professional basketball players. There isn’t really anything that’s happened this year that’s surprised me, other than maybe the sheer brutality and cratered desolation of basketball that was the Pelicans game last week.

“Somewhere around .500” is exactly where the Grizzlies need to be until January or so. The middle of the West pack is not really markedly better or worse than the Grizzlies are, and they probably just have to hang in there and keep contact while they find themselves. When Gasol has looked good, he’s looked really good. Chandler Parsons is just now getting back on the court, and is probably weeks away from being totally right. Baldwin and Harrison (OK, mostly Baldwin, but I’m feeling generous) will probably be fine as they learn the game more.

This is exactly the kind of season I thought the Grizzlies were going to have in the first place, and it’s the right time in the arc of this franchise for it. They need to figure out who they’re going to be for the next 3-5 seasons, and that’s what they’re doing. If they only make it to 7th in the West this year, I don’t think that’s a failure if it helps them to be a better team for the next two years. There are a lot of new things happening, and when you try to do several new things at once, it doesn’t always go smoothly at first. They’ll be fine. It’s all fine, and I’m not even being sarcastic for once. “Keep a cool booty,” as the man says.

Someone guard CJ:
The shots only remind us
He broke Conley’s face