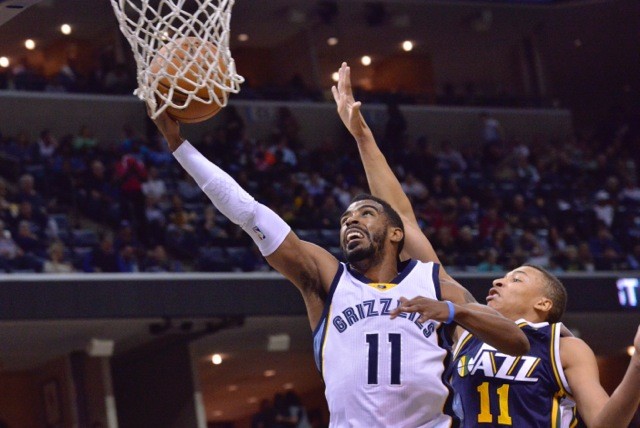 Last night the Grizzlies got an important road win over a solid (if depleted) Utah Jazz team in Salt Lake City, 102-96. It certainly wasn’t the prettiest game they have played, when has that ever been the measure of Grizzly success? Several players made key contributions, both young and old. The defense was never quite right, but they were able to get stops when it mattered, and the long road towards our glorious shared Fizdale Future got a little bit shorter.

The win was much-needed, especially in light of the disappointing end to the game in Milwaukee Saturday night. Without winning last night, the Grizzlies ran a real risk of going 0-4 on their current road swing, with the LA Clippers resting up for Wednesday night and the always tougher-than-expected Mavericks slated for Friday. The victory over Utah keeps them right at .500, which is still about where I expect them to be for the next little while. The second tier of the West seems a bit more wide open than previously thought, and I don’t think any team with something resembling a winning record is going to be out of the playoff picture until very late in the season.

Now on with the recap.

In which Deyonta Davis is worth all that guaranteed money

It wasn’t clear when the Grizzlies traded the Clippers’ first round pick to Boston that they would do smart things with the two second-rounders they received in return, but given (1) Rade Zagorac’s nice play in the Adriatic League (which is a real league that exists, I discovered this year) and (2) the extreme promise that Deyonta Davis has shown in limited minutes, it’s clear that the fruits of the Second Jeff Green Trade (the good one) are going to pay off.

Davis is very raw, but it’s easy to see why he was projected to go in the lottery. On defense, it seems like he affects every single possession in some small way, without even trying that hard. He’s got a natural feel for the game, a basketball mind that lets him see what’s developing and be in the right place. He’s 19. He’s only going to get better. He might be a partial solution to Zach Randolph’s pitiful defense (which saw him sitting out in crunch time again last night in Utah), because his ability to protect the rim is unlike anything the Grizzlies have had in years.

There are going to be setbacks and bad nights, for sure, and he’s really only played heavy minutes two or three times, but Davis is surprisingly good, and certainly good enough that it makes sense for him to be paid like a first-round guy. Between Davis and Jarell Martin, you could be looking at the (bright) future of the Grizzlies’ frontcourt.

Yeah. Well, I don’t know what else to say about this. Learning a totally new defensive scheme from the one that you’ve been playing to great success for several years in a row is not easy—in fact, it’s probably one of the hardest things for a team to change on the fly. Fizdale’s scheme is very different from the old Hollins/Joerger masterpieces dependent on overloading the strong side and never switching. Because there’s so much new, and because there are so many new and/or young players trying to play a defense that the veterans don’t even know that well yet, there are lots of problems once the defense is forced to rotate. No one is sure where to be when, or who is supposed to rotate to the ball, and the Grizzlies’ interior defense is suffering for it.

This is the underrated part of the coaching change, to me. The Grizzlies have depended on that defensive identity for years, and now they’re just firmly in the middle of the pack (they’ve got a defensive rating of 106.7 according to Basketball Reference, good for 13th in the league). Learning this stuff on the fly against good teams is challenging, especially from a motivational standpoint. It’s going to be hard to keep guys engaged with learning a new scheme when they’re getting beaten badly by solid offensive teams on a regular basis (this assumes the Wednesday night Clippers rematch goes as poorly as the first one did, which seems likely given how well LA is playing right now). That buy-in is essential. File “defense” under the “work in progress” category.

Vince Carter is playing the best basketball he’s playing in years, now that he’s officially the oldest player in the NBA. Right now, his FG%, 3P%, and offensive rating are literally higher than any other season in his career. Those numbers will inevitably return to something approximating his career averages, but still—he’s Vince Carter, so his career averages are still pretty dang good.

Carter’s finally fulfilling the promise of his signing, when he was brought in to replace a declining Mike Miller. Dallas was smart to let him go after the surgery, because it took two full years of recovery for him to be right again, but now he’s playing his best season since 2012-13. He might be ¾ Man, ¼ Amazing these days, but his defense, his shooting, his ability to move the ball around, and his steadying influence on the other guys on the floor have made him invaluable, especially since he’s doing all the things Chandler Parsons was brought in to do.

(Except the part where Vince Carter is a way better defender than Chandler Parsons even though he’s almost 40. There is that part.)

I’m not sure whether Carter’s early start is sustainable, but I don’t really care much. For one thing, it’s been amazing to get to watch Vince Carter do Vince Carter things after a couple of seasons of wondering how soon he was going to announce his retirement because he didn’t look like he could play anymore. For another thing, in theory, by the time the law of averages catches up with Carter, Parsons should be in better game shape and able to carry a more appropriate workload. (This is certainly wishful thinking, and I will probably be made to regret saying it.) At any rate, age is nothing but a number, and at almost-40, Carter’s got about eight years before his age catches up to his 3-point shooting percentage so far this year. Not bad, old man.

I quit doing these for a while (OK, really just for the Nuggets game and the Bucks game) because, well, I put all of my hopes into a campaign to elect Juan Carlos Navarro President and I really think we could’ve won some electoral votes if it hadn’t been for those attack ads pointing out that he was neither an American citizen nor very effective for the one year he spent in the NBA. (That one glorious year when Memphians got to see La Bomba in the flesh! Ah, Juan Carlos! Ah, humanity!) When it all fell apart I was crushed, and fell into a deep depression, from which I was only rescued by YouTube clips like this one:

Anyway, it’s been a long week. Let’s get back on the haiku train.

Jazz in Utah? No,
The music is in Vince Carter,
Aged like a folk song.