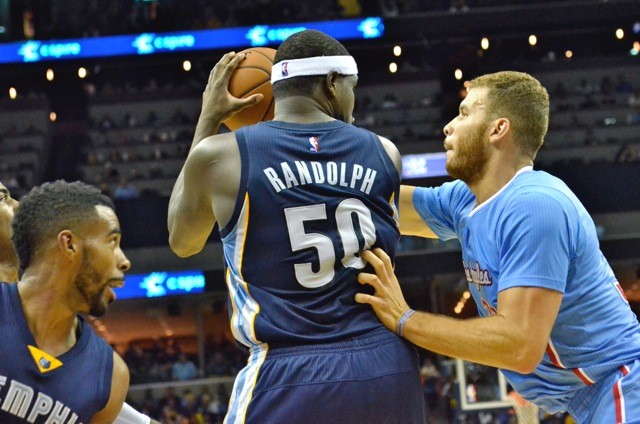 It was one for the ages, another chapter in a long rivalry between two teams who have a genuine distaste for each other that stretches back at least four years and two playoff series. Last night the Grizzlies and Clippers played in LA (after an uneventful and disappointing first matchup that the Clippers won handily) and played one of the most exciting regular season games I’ve seen in a while—and the Grizzlies came away with a win against what has so far been the best team in the NBA on their home turf.

★ Andrew Harrison is starting to win me over. He’s gotten a lot better as the season has gotten underway, especially on the defensive end. He guarded Chris Paul with serious attitude last night, including this spectacular chasedown block:

The chase down block is the best defensive play https://t.co/91O3BuXMYt

(Not to mention his accidental wrestling takedown ot Luc Mbah a Moute.)

If he keeps this up and develops his offensive game to match is defense, Harrison is going (1) make me admit that I was wrong about him and (2) make Wade Baldwin look more like a project whose time might come next year instead of this year. Harrison’s slow start had me convinced that Fizdale saw something in him that wasn’t there, but he’s becoming more steady by the game.

★ Mike Conley shot extremely well. At one point Conley was 7/7 from the field and 5/5 from three-point range. He finished the game with 30 points… on 12 shots. It was an extremely efficient scoring outburst from Conley, and it happened against some extremely difficult defense from Chris Paul, who hounded Conley without mercy most of the night. The Clippers’ defense overall last night was good, but Conley was able to roast them pretty handily. At times he makes you believe what he said on Media Day: that this is the way he and Marc Gasol have always wanted to play.

★ Speaking of Marc Gasol, he hit his 4th three pointer of the night—he finished 4/5 from long range— and did this:

I don’t know what else to say about Marc Gasol other than what I said last night when it happened:

★ Chandler Parsons is still not ready for prime time, and I don’t care. Parsons clearly doesn’t trust his leg yet, and I don’t blame him. He’s not playing at the level anywhere approximating his peak ability yet… and I’m not really worried about it. It’s going to take time for him to get back in the swing of things physically, and even then let’s not forget he’s only actually played with these guys the last month or so. I’ll start paying attention to whether Parsons is looking like himself sometime in December.

★ I missed this. Game 6 of the 2013 playoff series against the Clippers was the most fun, profoundly “Memphis” sporting event I will ever experience. Someday, Chris Herrington and I should break down our top 5 or 10 favorite moments from that one game. When it’s played at the sort of violent frenzy that marked most of last night’s game, Grizzlies/Clippers is the best rivalry in professional basketball, and certainly the most fun to watch (though sometimes perhaps nauseating in its intensity). When the Clippers rolled into Memphis a couple of weeks ago and the Grizzlies didn’t even seem interested in the game, I thought maybe it was over. Everything ends at some point, right?

The Grizzlies still hate losing to the Clippers, and when it happens, they are set on a mission of retribution. Last night was the most physical game the Grizzlies have played all year, but it wasn’t the slow, methodical, plodding brutality of old, the kind that used to fluster the Clippers by never relenting even once. This new intensity came in waves, great spasms of defense as some of the young guys looked at the old guys like, “Wait, they’re gonna let me do that?”

They are going to let you do that, kid.

Throw that elbow into somebody’s gut while you’re trying to get position on the block. Slap Chris Paul’s hands away two feet in front of a ref while he pretends not to see you do it. This is the essence of Grizzlies/Clippers, and I missed it.