Last night the Grizzlies played their most impressive half of basketball all season, followed by a tough defensive half when that offense started to wane, and came away with their fifth straight win, this time on the road over the tough-to-beat Charlotte Hornets. The Grizzlies scored 69 points in the first half—more than the Mavericks were able to score against them in an entire game on Friday night—and never let up as Charlotte, one of the better teams in the Eastern Conference this year, tried to mount a comeback. It was a culmination of a trend that started in the Grizzlies' game at the Utah Jazz last week: clamping down on defense, moving the ball well on offense, getting good looks at the basket from long range and shooting well enough to capitalize on them.

The Grizzlies have now defeated the Jazz, Clippers, Mavericks, Timberwolves, and Hornets in consecutive games. Four of the five happened on the road. Chandler Parsons played in three of those games. Gasol and Conley, apparently operating without a minutes limit, carried the team in all of them. Here are some scattered thoughts about the game last night, about the win streak in general, and about where the Grizzlies are right now. 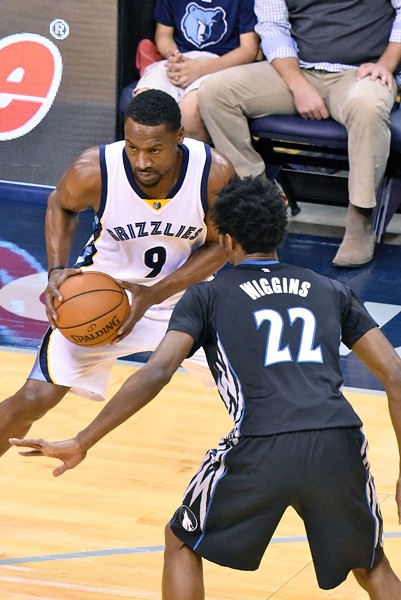 ★ With Tony Allen back and healthy, the Grizzlies' defense is much better. This seems obvious now, but the Grizzlies' defense was the source of much consternation up until about a week ago. The new defensive scheme clearly gave the Grizzlies some difficulty, and still does at times, but with Allen back—and he certainly looks back, when he pretty clearly wasn't right yet when he first took the floor this season—the issues that may still linger are much less apparent. Allen's return has also coincided with a defensive renaissance from Marc Gasol, who is playing much better defense right now than he did at any point last year, and maybe the year before. It's easy to forget that this is a guy who won Defensive Player of the Year. It's also easy to forget how hard it is for opposing wings to even get the ball with Tony Allen is playing at or close to his peak. Welcome back, Grizzlies defense. We missed you.

★ Andrew Harrison has won the backup PG battle for now. At the beginning of the season, that seemed like and impossible thing for me to say by late November, and yet: Harrison's defense has steadily ramped up, he's starting to figure out (1) what to do with the ball on offense and (2) how to get to the foul line if all else fails, and Wade Baldwin went from DNP-CD to garbage time to being dispatched to the Iowa Energy to get some minutes there. Harrison is a shining example of the Grizzlies' new-found focus on player development, even with all of the rough edges he still clearly has. Playing for the Energy last year, putting in the work with Fizdale all summer, being trusted to carry the workload when he clearly wasn't quite up to it yet at the beginning of the season... by January, Harrison may be even better and we'll put all of the "Grizzlies need a vet backup" talk to bed. At the very least, he's already earned the benefit of the doubt.

★ Mike Conley has stepped up his game to match his paycheck. In the last five games, Conley has scored 30 points twice (against the Clippers and Hornets), has defended tenaciously, moved the ball well even when his shot wasn't falling (let us never speak of that Mavericks game again), and done all of the things that Grizzlies fans hoped he would still be able to do when the team signed him to a max contract this summer. I'd still like to see Fizdale rest him a little more; his minutes have crept up as the winning streak has continued, as have Gasol's. But Conley's been great, and after the perpetually banged-up last couple of seasons he's had, it's good to see him in top form again.

★ Chandler Parsons can take his time getting right. The Grizzlies have shown they're capable of beating good teams whether Parsons is on the floor or not. Now, I say this with a big caveat: James Ennis left the floor with a calf injury last night and didn't come back, and if Ennis is down for any significant amount of time, Parsons becomes a lot more necessary. But with Parsons clearly not functioning at 100%, the Grizzlies have still been able to use him when he's playing and survive without him when he's not, and that's encouraging. I didn't even expect to have seen this much of Parsons yet, so I'm still treating any minutes he plays as a pleasant surprise, and the Grizzlies seem to be treating his situation the same way. Assuming he can play his way into form by Christmas or so, I don't really see any reason to worry about Parsons yet.

★ David Fizdale knows what he's doing. That's not to say he hasn't made any mistakes, but for the most part, the Fizdale Era has brought a new focus, a new energy, and a new sense of unity and motivation to a Grizzlies team that was clearly (in hindsight) not firing on all cylinders for the last 18 months or so. That's not to say that all of the blame lies at the feet of Dave Joerger, or that Fizdale is the only reason things are turning around; health of key players, organizational philosophies, and changes to the roster itself have all played a major role in the transformation. But Fizdale certainly brought with him a new sense of togetherness, of relaxed intensity, and of authenticity in communication that has resonated with the Grizzlies' players in important ways. Moving Zach Randolph to the bench without starting a mutiny, moving Gasol behind the three point line, running an offense that generates great looks for guys who can shoot, trusting the young players to carry the team (whether that's Harrison for big minutes or Deyonta Davis for small minutes, or even starting James Ennis instead of Vince Carter)—all of these are coaching matters, and Fizdale has excelled at them. I was excited about the hire when it happened, and even more excited when I got to sit down and talk to the guy earlier in the preseason. But now... is it to early to call him a coach of the year candidate?

The Grizzlies are busy over the Thanksgiving holiday, with a game in Philadelphia on Wednesday night, followed by a home-and-home back to back with Miami that sees them play in Memphis Friday night and Miami (for Fizdale's big homecoming against his mentors Spoelstra and Riley) Saturday night. Miami is really struggling this year, and despite their trust in Joel "The Process" Embiid, the Sixers are still very much a young team with little consistency from night to night, so this is a stretch of the schedule where the Grizzlies should do well and also maybe get some rest for Conley and Gasol. After all, there's still a great deal of basketball to be played.