Celtics 112, Grizzlies 109: Why Are the Grizzlies Losing? 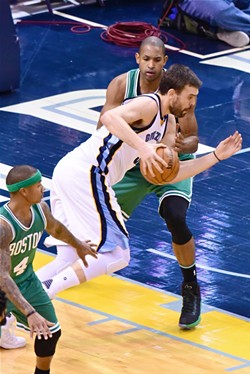 The Grizzlies got back a Mike Conley who was playing the best basketball of his career when he went down two weeks ago, and even though they went 7-2 while Conley was out and beat the Golden State Warriors by 20, now the offense is extremely limited and nobody looks comfortable playing with each other. What’s going on with the Grizzlies, and what can they do about it?

★ The offense has to be more than Gasol and Conley. It’s a Herculean feat for Conley to be back on the floor right now, but he still doesn’t look like himself. His timing is off, he’s not as aggressive (a broken back will do that to you, I suppose), he hasn’t been as smart with his shot selection…. bottom line is, Conley hasn’t been right.

The Grizzlies found a way to score without Conley. The ball moved around, Gasol went back to being the primary distributor, and guys knew they had to move if they were going to get a good shot. With Conley back, the offense has returned to its unsure pre-injury status, which is mostly a two-man game where everyone else stands around and waits to be passed the ball. Gasol was so transcendent with Conley out that it’s been depressing to see him shrink with Conley back, just as people were starting to talk about how well he’s playing.

Everything for the Grizzlies may still start on the defensive end, but in all three games since Conley has returned, the offense hasn’t even been good enough to stay afloat. Last night was certainly better than the Kings and Jazz games, but there’s still a lot of room for improvement in terms of finding a balance between Conley and Gasol on offense, and enabling other guys rather than relying on the Gasol/Conley pick and roll to create every opportunity. With Conley off the floor last night, the ball moved better. That's a problem. 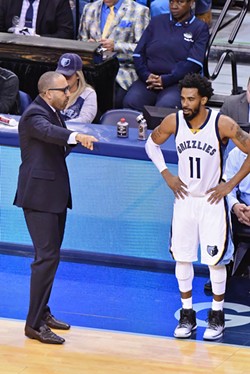 ★ The defense has to remain focused. In his postgame presser, David Fizdale gave a specific example of what was going on with the Grizzlies’ defensive mindset during the second half. At one point, the Celtics ran the same play three times in a row and scored each time because the Grizzlies were supposed to switch and didn’t. Fizdale said he called a timeout after the second time, talked about what to do on that specific play, and then Boston ran it again immediately and the Griz still didn’t switch.

That, to me, is not a sign of a team that is paying attention to details on the defensive end. After the first half, in which the Celtics shot 29.3% and only scored 31 points, it was easy to assume that the correction was coming, and that Boston wouldn’t be held to 62 points for the whole game. The problem is that it seemed like the Grizzlies also made that assumption and didn’t sweat the small stuff; in the process, the Celtics scored as many points in the third quarter as they did in the entire first half, and scored even more in the fourth quarter (35 points) as the Grizzlies tried to hang on and force overtime instead of losing in regulation.

That’s not to say Isaiah Thomas didn’t have anything to do with it. Thomas ended up scoring 44 points on only 16 field goal attempts, including 7/10 from beyond the arc, and 36 of those points came in the second half and overtime, when it seemed like he just couldn’t miss. His speed and shooting ability make him a nightmare to defend, and he was certainly more than the Grizzlies could handle. Even with that being the case, the Grizzlies still didn’t do their best work on the defensive end, and given the stagnation of the offense, the Griz can’t really afford to be less than perfect right now.

★ It’s time for Gasol to keep being Gasol. We’ve been saying for years that if Marc Gasol could be more aggressive on a consistent basis that he’d be an All-Star starter every year. This stretch of three games is further proof that that probably won’t ever happen. With Mike Conley out, Gasol knew he had to carry the team to victory, and did whatever it took to make it happen, whether that was a triple double, scoring 30 points, playing lockdown defense, anything. He was everywhere, crushing the will of the opponent almost single-handedly.

Since Conley came back, we’ve seen the Marc Gasol of the first two weeks of the season: not quite engaged with every play, not distributing from the elbow, deferring to Conley at every opportunity. That’s not going to win the Grizzlies any basketball games right now. Gasol has to realize that Conley isn’t right, and yet he’s continuing to play like Conley is the one playing MVP-caliber basketball. Fizdale called him out a little bit after last night’s game, saying that he was disappointed in the Grizzlies’ leadership and that “our huddles are like tombs right now.” Fizdale made Gasol the only captain, and has clearly been making an effort to cultivate the kind of leadership he’s shown in spurts through his whole career. But Gasol can be a moody guy. He’s the best player on the team, and he’s just as obsessed with process as Fizdale is, but who knows how he’ll respond to being told that he needs to get better. I’d like to think he’ll do what he needs to do to make the team win right now, but we’ve also seen his mental state descend into chaos as it did in 2015 after the Jeff Green trade, ripping his jersey, fouling out and sitting down on the court, etc. I appreciate what Fizdale is doing, and he has a massive amount of pull in the locker room because he says exactly what he thinks and tells his players exactly what he expects from them. We’ll just have to wait and see if he can shake Gasol out of this mini-slump or if the chemistry of the team is becoming a longer-term project as they regain most of the guys they lost to injury.