There are ghosts everywhere. The game happened, and the ghosts were literally across the street at Clayborn Temple, the church from which the sanitation strikes were organized, the church from which Dr. King led the March 28, 1968 march. You have to walk past it to get from the media parking lot to the arena. How many people on the way to the game drive right past the old stone church, until recently abandoned, and don’t know what it is?

Memphis will never be free of these ghosts until we don’t allow our neighbors to be crushed by poverty, by systems stacked against them to keep them unequal, by our own indifference to people who are just as much Memphians as we are. But we unite around basketball everywhere in this town, and the Grizzlies are the most visible expression of that, the one that gives us the opportunity to show the rest of the world what we are.

The Grizzlies were the originators of the NBA’s decision to celebrate Martin Luther King, Jr. on the holiday dedicated to his birthday. It’s not about the marquee matchup, or not supposed to be. The league has taken it into the realm of the comfortable, where everybody talks about having a dream and leaves it at that. By involving the National Civil Rights Museum and having the symposium, that’s exactly what the Grizzlies tried to avoid. But the teams wore warmups that said something or other about dreaming. They didn’t say this:

The first thing I would like to mention is that there must be a recognition on the part of everybody in this nation that America is still a racist country. Now however unpleasant that sounds, it is the truth. And we will never solve the problem of racism until there is a recognition of the fact that racism still stands at the center of so much of our nation and we must see racism for what it is.

Or this, from the “I Have a Dream” speech:

We can never be satisfied as long as the Negro is the victim of the unspeakable horrors of police brutality.

Memphis, just as much as anywhere else, and probably more, needs to hear this stuff just as much today as it did 50 years ago. And the point of putting on an MLK Day symposium was for the Grizzlies to remind us of this (from that same Grosse Pointe speech):

Dr. King was a powerful and inspirational speaker. His words still have the power to instill a profound hope, even today. But he wasn’t assassinated at the Lorraine Motel because he was an inspirational speaker; he was killed because he spoke the truth about America as it really is, and then did something about it. And by turning his holiday into a great opportunity to feature marquee matchups and drive ratings, the NBA reveals itself to be tone-deaf to that fact. We can’t celebrate the memory of Martin Luther King like it’s not an ongoing struggle, like it’s something that happened back in the Sixties and thank goodness all that unpleasantness is behind us. In Memphis, the ghosts won’t let us. The Grizzlies’ original idea with basketball on the MLK holiday was to remind us that there is much to be done. The NBA doesn’t seem so comfortable with that message. Dreams are easier to sell than ghosts. 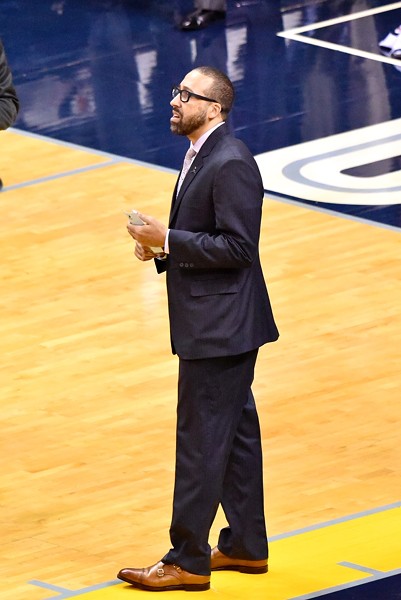 The game itself was typical late-model Grizzlies: an inconsistent start, a lack of focus on defense, a mad attempt at a comeback, a close fight through the fourth quarter, and a loss because a good player on the other team made a play.

Late-game execution was pretty poor, with Conley making a questionable decision on the last play of the game to take the shot himself instead of finding the open Gasol, but more than that, it seems like Fizdale is struggling to figure out which five-man units can be on the floor at the same time. The “Tony Allen as backup point guard” experiment doesn’t seem to be working out, but it’s hard to tell whether that’s because of Allen’s limitations as a ball-handler, or because of the lack of floor spacing and the slow defense in those units (which so far have featured Vince Carter and Zach Randolph pretty prominently). The youth and athleticism (and the Troy Daniels shooting) that carried the Grizzlies to their better-than-expected start seems to have fallen by the wayside, as Andrew Harrison can’t get on the court with Allen playing PG, Jarell Martin hasn’t shown any signs of being a reliable rotation player yet, and Troy Williams is stranded in Iowa with Wade Baldwin. With Parsons back in the lineup, and Deyonta Davis set to return soon, the problem Fizdale faces—”too many decent players”–is a good one to have, but that doesn’t make it any less of a problem.

This stuff will work itself out. The trade deadline looms as a possible opportunity to clarify the rotations a bit, but the Griz don’t have many real trade pieces (beyond their impressive stockpile of second-round picks, including one from Miami that’s starting to look valuable indeed). But in the meantime, the Griz can’t keep dropping games to teams that aren’t as good as they are. The Western Conference wins and division wins are important, but the overall record counts first, and that’s where the Griz are shooting themselves in the foot by turning in these disjointed performances against .500-or-worse East teams.

The Grizzlies are in DC to play the Wizards on Wednesday night, and then they return home for the rare home back-to-back against Dave Joerger and the Kings and the Rockets, over whom they now hold a 2-0 lead in the season series. It’s an important week in terms of momentum, and as Parsons works his way back into a “normal” allotment of minutes, I hope that Fizdale can find a more consistent way to get minutes for both Parsons and Daniels. To me, that’s the real test of this week: to get the team to play as well as they did without Conley, Parsons, and Ennis (as crazy as that sounds).