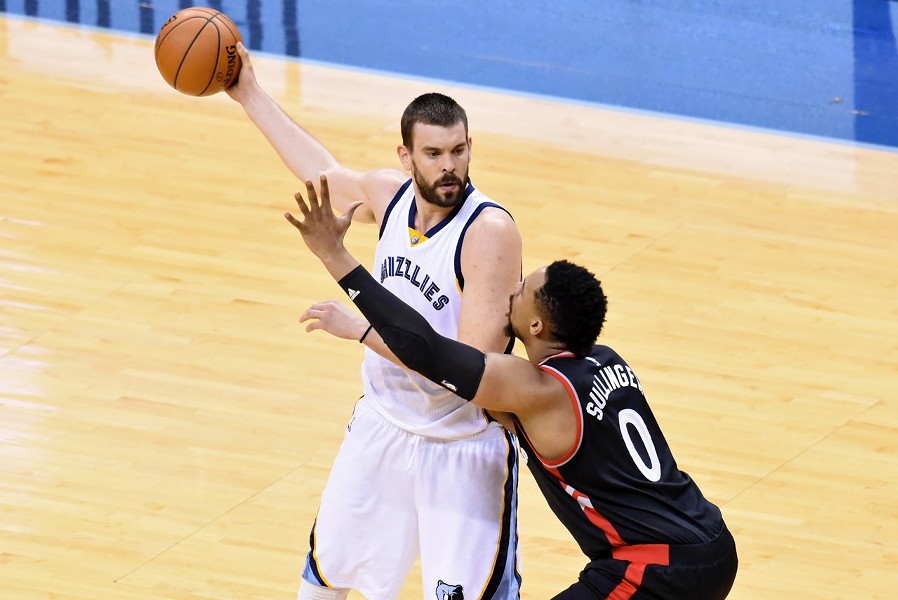 The Grizzlies won a two-point game without scoring a single field goal in the final six and a half minutes against the Toronto Raptors last night, and this morning that feels like the miracle of miracles. A winnable game turned into another trademark Grizzlies nail-biter as Toronto made it a close game and the Griz offense collapsed in a heap of ashes, but the home team prevailed on a night which saw James Ennis and Zach Randolph (!) in the starting lineup against a Toronto team that’s currently sitting in second place in the Eastern Conference.

In Which Marc Gasol Transcends The Boundaries Of Space, Time, And Bad Offense

Marc Gasol set a new career high last night with 42 points scored. Gasol was 14 of 25 from the floor, including 5 of 10 from long range (that’s 50%, for those of you who slept through math class), and 16 of those points came in the first three minutes of the game, during which Gasol cus through the Raptors’ interior defense (a loose application of that term) like a Sawzall when he wasn’t busy bombing threes over a bewildered Jonas Valanciunas. Gasol attacked the Raptors with a ferocity rarely seen from him in a game Mike Conley actually played in, and when he finally forced Toronto to call a timeout it seemed like all things were possible.

The lead didn’t hold, of course, because these are the 2016-17 Grizzlies, who are allergic to leads, but it was interesting that in a starting lineup featuring James Ennis and Zach Randolph in place of Chandler Parsons and JaMychal Green, Gasol sensed that he needed to activate his ability to take over a game right from the opening tip, and set a tone for what was to follow.

One of the under-told stories of this season is the way in which David Fizdale has slowly turned Gasol into a leader, and that manifests itself most obviously on nights like this, when effort has been an issue lately, so Gasol decides to set the tone all by himself. Toronto gave the Griz all kinds of problems on the defensive end, and later in the game the offense sputtered to a complete, unwatchable halt, but for those first few minutes (and really for much of the rest of the game) Gasol was electric.

In Which Zach Randolph Should Probably Not Be A Starter Anymore

I know that for some reason this has continued to be A Thing this year–if only because Randolph himself has told a long cavalcade of media people that he thinks he should still be a starter–but Zach Randolph (1) should probably win Sixth Man Of The Year this season and (2) should probably come to terms with the fact that Sixth Man is the role to which he’s best-suited at this point.

Last night’s game was a good reminder of why, if you were looking for it. In 40 minutes against the Raptors, Z-Bo did what he usually does in 25, even though Toronto’s frontcourt was anchored (to the extent possible) by Patrick Patterson and Valanciunas, who was mostly on Gasol. That’s a bench-level guy to guard Z-Bo, and Z-Bo did about what he usually does. His defensive weakness–the real reason I think he’s got to come off the bench going forward–was on display, too, as the Grizzlies’ bigs in general (save for Deyonta Davis, blessedly returned from injury to save Memphis from having no rim protection at all) struggled mightily to contain penetration, defend in any sort of space, or deal with the pick and roll.

I understand why both Randolph and Grizzlies fans are having trouble with this transition. Z-Bo’s a proud guy with a long established tradition of being the Grizzlies’ alpha dog, even beyond the point that he probably should have been. Likewise, Griz fans have (rightfully) elevated him into the pantheon of Memphis legends. When a guy like that hits the point in his career that he starts to fade away, that can be a bitter pill to swallow. But nobody thinks Randolph should be done playing; he’s clearly got a great deal of utility left as the Grizzlies’ primary second-unit scoring option. But that’s not what he wants to be. It’s a delicate situation, but last night he started, and only served to further prove that maybe what he wants to be shouldn’t matter so much.

In Which Everything Was Horrible And Nothing Worked

I want to return to something I addressed earlier: the Grizzlies somehow won last night despite almost blowing a double-digit lead by not scoring a single field goal in the last 6:24 of the game, when Tony Allen made a layup (insert joke here) to make it 97-87 Memphis. It’s not like the Griz were taking good shots and missing them, either; the offensive execution down the stretch of last night’s game was some of the worst I’ve seen all season long out of this group, and if the defense hadn’t held somewhat steady (and had Marc Gasol not figured that he needed to get to the free throw line ky any means necessary) this is a different recap about the blowing of an unconscionably large lead.

It’s easy to blame the lack of execution on conditioning, and I do think that’s a factor; Toronto plays a very aggressive offense that gets the ball up the floor very quickly. But that’s not all that was going on. The Griz reverted to what they’ve done all season long in these situations: the stagnation of running Conley/Gasol pick and roll until something miraculously opens up, with three guys helping into the paint so there’s no opportunity to dump it off to Z-Bo.

At this point in the year I’m not sure what else to say about this. Other that until it stops, the Grizzlies will be extremely limited, and the stagnation of these sets no doubt contributes to the Grizzlies’ poor numbers with Gasol and Conley on the floor together. Last night, along with one of the worst officiating decisions I’ve ever seen (which awarded Toronto a timeout and the ball even though they clearly didn’t have possession), almost cost the Griz a close game that should’ve never turned back into one.