You may not have been awake, but last night 17,000 of your friends and neighbors stayed out late at FedExForum to watch the Grizzlies beat the Spurs 89-74, one of the few such times that’s actually happened since the Griz eliminated the top-seeded Spurs in the 2011 postseason. Kawhi Leonard was a late scratch with a quad contusion, and the Griz made sure to capitalize on the opportunity presented them by his absence. It was a low-scoring affair (obviously) and at times it seemed impossibly so; the score after the first quarter was 17-14 Grizzlies. But despite the poor shooting (the home team shot 39.5% on the night, but at times that number reached as low as 33%) the Grizzlies managed to generate just enough offense to stay afloat while the defense did the dirty work. How’d they do that? Well.

In Which Vince Carter Is No Longer Half Amazing, He’s Full Amazing

Vince Carter is 40 years old and blocked four shots in last night’s game, and I’m a decade younger and sometimes my back hurts if I stand up too quickly. A lot has been made of Vince’s age lately, and his overall career transformation from superstar (temperamental one, at that) to rock-solid role player, but it needs to be said again: this guy is a treasure, and every minute that he is on the floor for the Grizzlies (even the ones I said earlier in the season should go to Troy Williams, which I don’t regret saying) is something to be appreciated. This stat from last night blew my mind:

Only 5 players 40 or older have ever blocked 4 or more shots in a game:

That’s some rarefied air, and even more so when you consider that Carter is only 6’6”. But blocking shots wasn’t all Carter did last night. Even though he finished with a pretty modest 7 points, 6 rebounds, and 2 assists, it felt like he was everywhere, making every play, defending well, putting himself in the right position at the right time. At this point in his career, Grizzlies fans (even the ones who lamented the signing when he showed up for that first season and still couldn’t run because of his bum ankle) should appreciate these moments for what they are, because this guy is a rare breed: a 40-year-old NBA legend who can actually still play like one.

In Which Brandan Wright Has Returned From The Outer Darkness

Speaking of former Dallas Mavericks who were signed by the Grizzlies only to be mostly useless for 12 straight months, Brandan Wright hit the floor in a home game for the first time in forever (no Frozen jokes please, yes I have a two-year-old daughter) and reminded us all what was so exciting about him in the first place. Wright’s offensive skill set is like nothing the Griz have had before in a reserve big, and his ability to score on lobs, in the pick and roll, and his defensive skills make him a perfect fit for this roster. Wright opens up the floor for Conley and Gasol in a way that JaMychal Green and Zach Randolph don’t, and it totally changes how opponents have to defend the Griz when he checks into the game.

…which puts the Griz in an interesting spot as the trade deadline approaches. Wright is on a very good deal, and he’s finally back on the floor proving his worth. Do the Grizzlies roll with him (since they signed him to play in the first place, not to be an asset) or do they move him to get a backup point guard for the longer term? Do they want to keep Toney Douglas or cycle through some more guys on the 10-day carousel for making a decision at that position, or can they move Wright and one of their stockpile of second-round picks (one of which belongs to Miami) for an upgrade there and elsewhere?

I think they should keep him, at least for the rist of this season. With Parsons still not right, and the rotation still very much in flux, the Grizzlies need the ability to dramatically change looks just based on changing the 5-man unit on the floor, and what Wright brings to the table is the ability to do that. I don’t think he’s going to challenge Green for a starting spot—he might push Gasol a little too far out of position for that to be a good idea on a consistent basis—but I do think he is going to present yet another puzzle piece for David Fizdale to fit into a crowded rotation that is fully capable of going 12-deep (or even 13 if you think Harrison has value as a defender).

It’s not often that a team can acquire a player with an extremely versatile skill set in the middle of the season without actually doing anything. After his last season, Wright was supposed to be like another new signing this year. If he can stay on the court for now, it’s a huge win for the Grizzlies, and a huge win for Wright’s career. 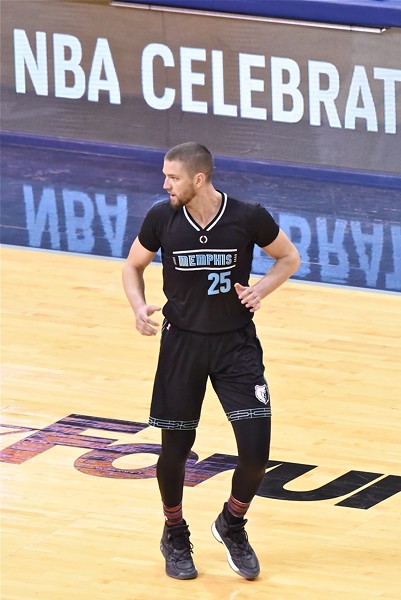 In Which Chandler Parsons Needs To Earn Our Love

Speaking of former Dallas Mavericks who were signed by the Grizzlies only to be mostly useless for (hopefully not twelve but…) six straight months, Chandler Parsons played 22:48 last night and looked terrible in most of them. Parsons finished 1/10 from the field (though he got 5 boards) and more that just the stat line, he looked uncomfortable, slow, and timid. Granted, that can all be explained away as playing through discomfort—but if Parsons is still not right physically, why force the issue? It doesn’t do the Grizzlies any favors to put him on the floor in what are essentially rehab starts right now.

I’m not saying the Parsons signing was a mistake–it’s still far too early to make that kind of a judgement–but his recovery process is taking longer than I expected, and I have to think that I’m not the only one who is a little bewildered by his lack of progress.

Simply put, Parsons still doesn’t run like somebody whose legs work. Last night, his shot wasn’t there at all. His defense wasn’t really there even at his peak; he was always a guy who had to be covered for. It’s just not happening for Parsons right now, and even given Troy Daniels’ defensive liabilities, at least Daniels can get hot in a hurry. Parsons still doesn’t show any signs of warming up.