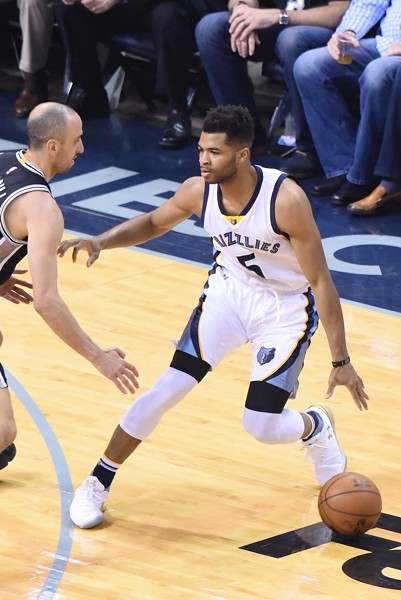 It finally happened on Monday night: the Memphis Grizzlies won a regular season basketball game for the first time after losing 11 straight. Their last win was on the road at Portland on November 7, and their last home win was October 28 against the Houston Rockets. To say it's been a while is to undersell the depth of the pit into which the Grizzlies fell over the last few weeks.

And when the smoke cleared, and the buzzer sounded on last night's 95-92 win over an underperforming Minnesota team, it was like they'd won a playoff series. Players spontaneously embraced, the crowd erupted, and it felt like some great dark cloud had finally lifted. Enough that Marc Gasol let one slip on live television:

It wasn't a pretty win by any means. The Grizzlies had to fight through some of the same struggles they've seen throughout the string of losses, and they finally caught a break by being able to beat a team having its own set of issues (much like the games they should've won against Brooklyn and Dallas). But, alas, a win is a win, and I have five thoughts about it:

★ Last night was Tyreke Evans' best game as a passer in a Grizzlies uniform. Evans started at the point, and even though his Grizzlies tenure has seen him be a bit of a ball-stopper (which is not to say that's a new development; that's been his game since he was a Memphis Tiger), last night he was very good, better than the box score indicates. Evans had 16 points, 9 assists, and 5 rebounds—a very "Conley" stat line, to be sure—but that number doesn't account for hockey assists, or great passes to a guy who missed the shot. Evans facilitated the Grizzlies' transition offense really well last night, and it made a big difference. They're still not a good half-court team in Conley's absence, but if Tyreke's going to facilitate like that and still score in the high teens or low twenties, it may not matter.

★ Marc Gasol was Marc Gasol, and sometimes that's all that matters. Gasol was active on defense, constantly talking, and even though the offense seemed to stagnate in the halfcourt with him on the floor, he was still good for 21 points, 5 assists, and 7 rebounds, a very "Marc Gasol" stat line. He was good when it mattered, and so was the rest of the team, and... frankly, if he'd been even 80% this good over the last month they probably win at least three games out of the losing streak. With some of the other players and lineups starting to come around, the Grizzlies don't need Gasol to play at an MVP level; they just need him to play like Marc Gasol. Last night against the Wolves, that was enough.

★ The young guys stepped up in a big way last night. None of them were perfect, but Dillon Brooks, Andrew Harrison, and Deyonta Davis all played crucial minutes in the win last night—exactly the kind of minutes you want to see from young players you're hoping to develop. Brooks defended well on some tough assignments, played within himself, limited the number of dumb mistakes he made, and contributed on both ends.

Harrison, with the ball in his hands, steadied the defense, made some heady plays on offense and put himself in a position to succeed. Harrison was abysmal as a shooting guard, but since the coaching change, JB Bickerstaff has kept Harrison on the ball, and that's been all the difference. He's still too slow to make decisions on offense, but he makes up for it on defense and by using his size and his intellect to make plays no other point guard on the roster can (or will, anyway) make. With Mario Chalmers struggling to get much done, Harrison might be the Grizzlies' best shot at a stable backup who won't cost them possessions, for better or for worse.

Davis played great defense to end the third and start the fourth quarters, and with Gasol on the bench and the Griz down 5, it turned the game around. If he'd been bad, the Grizzlies would've lost. Instead, he got a great putback, made a five-or-so-footer that he would've missed last year, altered shots, grabbed some rebounds, and generally steadied the frontcourt while the starting tandem of Green and Gasol got a rest. Davis has really stepped up in Brandan Wright's absence. After the game Bickerstaff said he's been encouraging Davis to play to his strengths—the shotblocking, rebounding, his transition play—and so far, it's working (and, to be fair, worked under Fizdale too). He might be on his way to making Wright expendable.

★ Mario Chalmers looks cooked. He's not running the offense well, he's taking bad shots that he thinks he should be able to make, and he's trying to play with "veteran savvy" when really he's not that kind of player. I'm not sure what exactly is going on with Chalmers. It's clear that he's lost some speed and isn't comfortable finishing at the rim, but he's also lost confidence in his ability to make the right play. Instead he freezes up, always picks up his dribble after coming around a screen, and generally makes poor decisions that lead to wasted possessions. Chalmers may have played well enough in camp to stay on the roster, or maybe Wade Baldwin was just that useless, but either way, it's been clear from the jump that Chalmers isn't what he was in 2015-16. That's not necessarily his fault—though I do think he could be playing better with his diminished skill set—but it's got the Grizzlies in familiar dire straits with respect to the backup PG spot.

★ Ben McLemore was bad. He made some good plays in the Spurs game at home—he's good for that every now and then—but last night McLemore struggled on both ends. I was not a fan of this signing when it happened, especially not when guys like Thabo Sefolosha were still available for roughly the same money, and McLemore hasn't really done much to change my mind. Does he have the ability to be an NBA player? Sure. Will he put it together and stop costing the Grizzlies possessions? I'll believe it when I see it. Last night, no.

Before the game, this was pretty much the only real analysis left to be made:

Wednesday night the Grizzlies take on the Knicks in New York, in another very winnable game. It's an East team and a road game, always a rough proposition for the Grizzlies, but the Knicks are not as good now as they were earlier, especially with Kristaps Porzingis still listed as day-to-day (he missed their last two games).

The Grizzlies should grab that New York win if they can, because this weekend they're home for a back-to-back against the Raptors and the Thunder, two teams they'll have a harder time with. The losing streak may be over, but that doesn't change the fact that the Grizzlies are currently in one of the toughest stretches of their schedule. When Conley gets back, the worst may be over, and they'll know how deep of a hole they have to climb out of.