April 02, 2019
1 comment
I was a guest on Kevin Cerrito’s sports-radio show, Cerrito Live, on Sports 56 last weekend, to discuss, of all things, the Memphis Grizzlies and their Wrestling Night promotions. Every NBA team has themed nights to add some pizzazz to their home games, and Wrestling Night is the home team's exclusive version of this. It was a great event when it was initially presented back in 2015. The night featured Jerry “The King” Lawler and Ric Flair, and was capped off by the Grizzlies beating a rival Oklahoma City Thunder team with Kevin Durant, Russell Westbrook, and Serge Ibaka. 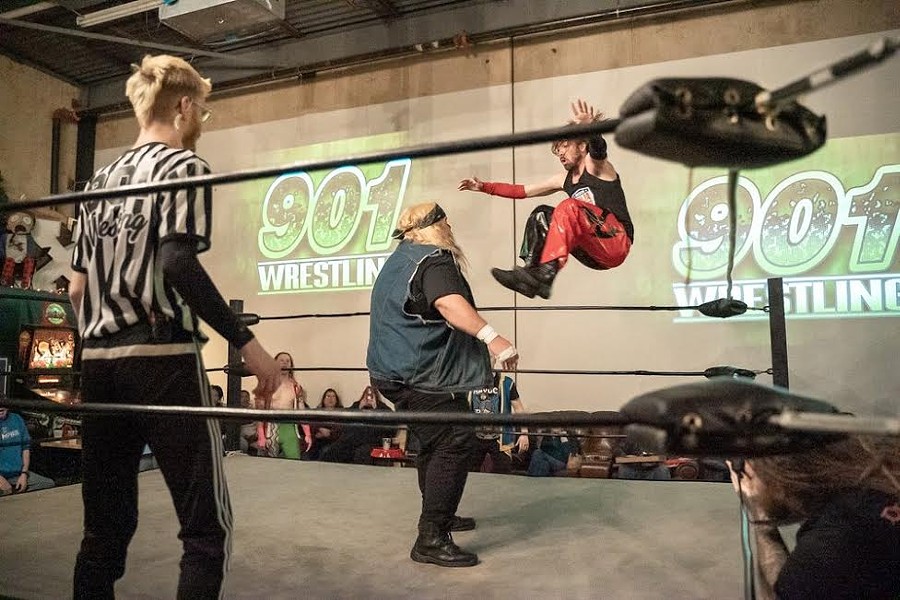 During my radio interview, we talked about how the Grizzlies Wrestling Night went from being an amazing annual event to one that the Grizzlies in-game operations team has run into the ground — resting on past accomplishments and probably serving up too much of a good thing. The Grizzlies had six Wrestling Nights this season, often featuring embarrassingly aging former wrestlers from the 1990s and early 2000s. Unfortunately, this gaffe by the team’s event staff mirrors some of the actions of the organization on the basketball side, as well.

I also attended a local wrestling show that Saturday night, from a promotion called 901 Wrestling. Its owner, Christopher Thompson, has been hosting outstanding shows at the Rec Room on Broad Ave recently, and I was able to bring Grizzlies beat writer Omari Sankofa from The Athletic out with me to experience and learn how deep wrestling is rooted in a certain subculture of the city. He grasped the parallels and passion of it and saw how it adds to what he has already observed about the city since moving here last fall from Detroit to cover the Grizzlies. In Memphis, we love our hoops — and we love our wrestling.

Wrestling and basketball have always played off of each other well in Memphis, due to the fact that both sports have a element of good vs. bad, heroes vs. villains, and intense rivalries with individuals that you may hate when they are on the court or in the ring but still find entertaining. This is what made great Grizzlies rivalries against the Thunder and Clippers so good, because we savored the classic battles between Zach Randolph, Tony Allen, Marc Gasol, and Mike Conley against the likes of Chris Paul, Blake Griffin, Deandre Jordan, Russell Westbrook, and Kevin Durant.

After the Grizzlies latest 113-96 loss to the Clippers on Sunday night, it sunk in for me just how much the once-entertaining Clippers rivalry is now dead. Both teams have new rosters and new directions and Conley is the lone member from either side's glory days. Something else that stood out was how the Clippers were able to lose Paul, Griffin, and Jordan over the last year and have still managed to find themselves in the Western Conference playoffs, even after dealing Tobias Harris, their star player from earlier this season. The Grizzlies' former rival embraced their rebuild, took the bumps, and added respectable but non-star free agents, while keeping a proven head coach to lead the retooled roster back to the playoffs. In 2017, Doc Rivers was demoted from his position as director of basketball operations to focus on coaching, and he got his team back in the playoffs ahead of schedule.

On the opposite end of the spectrum, the Grizzlies currently sit tied for the sixth-worst record in the NBA. They have a potential superstar-level talent in Jaren Jackson Jr. but a ton of uncertainty in the front office going forward. There is no obvious sense of direction, outside of what now looks to be failed attempt to convey the draft pick owed to Boston. Jonas Valanciunas, who has had a monster campaign since being traded to the Grizzlies for Marc Gasol, is now out for the season after an ankle injury that he suffered against the Clippers. This adds to a long list of recent injuries, including Jackson, Kyle Anderson, Dillon Brooks, Avery Bradley, CJ Miles, and likely Joakim Noah as players that are out for the season.

The Grizzlies are heading into what will truly be a rebuilding offseason for the franchise, as Mike Conley is also likely to be traded as early as draft night, this summer. It comes with a ton of uncertainty because of the organization's frustratingly unclear front-office structure, which includes long-time general manager (and scapegoat) Chris Wallace and whoever else seems to be pulling strings and making moves at any time. Can the fans trust an organization that has botched so many major decisions? There is no quick remedy to get the Grizzlies back to being a Western Conference competitor, but just as with their Wrestling Nights, I hope that the team's leadership realizes that just doing more of the same thing probably isn't going to work.