De'Anthony Melton: All About That Grit 'n Grind

De’Anthony Melton has found himself at the back of the bench with the Grizzlies, with more DNPs (did not play — coach’s decision) than playing time, plus multiple Memphis Hustle assignments. But Melton has the ability to make an impact on both ends of the floor — and all he needed was minutes to prove it. 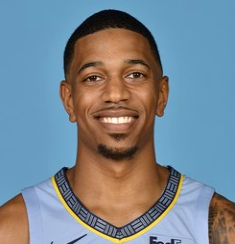 In the 2018 NBA draft, Melton was selected 46th overall by the Houston Rockets and then traded to the Phoenix Suns before the start of the season. He played in 50 games for the Suns while starting in 31. Melton averaged 5 points, 3.2 assists and 1.4 steals as a rookie.

The second-year guard was traded from Phoenix to Memphis in the off-season, along with Josh Jackson and some picks in exchange for Kyle Korver and Jevon Carter. Melton was said to be a key piece for the Grizzlies in the trade.

As former Grizzlies legend Tony Allen would say, “stay ready so you don’t have to get ready.” And that’s exactly what Melton did after Ja Morant went down with an injury.

In the game against the Minnesota Timberwolves last Sunday, Melton played 23 minutes and closed out a much-needed win to end a six-game skid. Melton stuffed the stat sheet with a near triple-double by finishing with nine points, a team-high eight assists, seven rebounds, and two steals.

After the game, Melton talked about how the Grizzlies overcame their third-quarter woes: “We were just going out there and scrapping — we were down a couple of guys but, you know we didn’t let that hinder our success. So we were going out there playing hard, playing Grizzlies basketball.”

Melton gave his coaches credit for believing in him and advising him to stay ready. “The coaching staff always telling me to stay ready, Melton said. “They definitely believe in me and see what I can do. The coaches are big advocates for staying ready and being aggressive — so that’s what I did and played my game.”

In his pregame presser prior to Monday’s game against the Pacers, Jenkins praised Melton for his play in the winning effort against the Timberwolves.

“All of the work that he has been doing — the offensive work, the defensive work and preparing himself for an opportunity. I think he set a tone for us defensively with a couple of steals and a couple of deflections. He had a couple of loose-ball rebounding, outside-of-his-area plays. Offensively he kept it simple. He could have come in there trying to prove something. I thought he proved it the right way by attacking, playmaking, tallying assists, finding his teammates and finding the right time to attack and score. He had a great overall game on both ends of the floor and he was huge for us.”

Monday night in a losing effort against the Pacers, Melton came alive for his best game of the season. In 25 minutes of play, the former USC guard tallied a season-high 16 points, nine rebounds, and four assists, on 6-of-10 shooting.

Jaren Jackson, Jr. is pleased with his teammate’s contribution in the absence of Ja Morant. Jackson said, “He’s [Melton] really good in the pick-and-roll. Obviously his shiftiness is going to get him a long way because he’s keeping defenders on their toes.”

Jackson added, “He can really read the defense well. But yeah, he’s been huge, especially that last win we had [at Minnesota]. He was huge in that game, came alive for us. Here he was ready to play [Monday night], came in and did the same thing. A lot to look forward to with him.”

Melton’s performance has won his coach over and the fans alike. He also has been outplaying Tyus Jones who was inserted into the starting lineup with Morant sidelined.

The 21-year-old says he has learned a lot from Jackson and Morant. He says they have both taught him how to handle different situations especially being young focal points and also being able to be successful with it.

Melton says, "Being in Memphis just teaches you to be scrappy and every night our team preaches the grit and grind — and to compete no matter what."

Jenkins continued to give Melton praise, “As we’ve talked all season long, when that chance came he’s been prepared. A player that we see a bright future with. If he keeps having the simple mentality on defense and offense, keeps his game plan pretty simple for himself I think he could have a really bright future.”

In just two games, Melton has proven he deserves a spot in the rotation. He has been making his presence felt on both ends of the floor. Only time will tell if Jenkins and company will give him more opportunities to showcase his talents on the court.