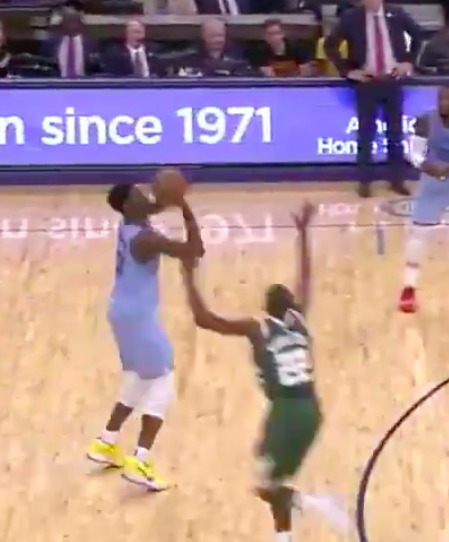 The Memphis Grizzlies put up a good fight Friday night, until reigning NBA MVP Giannis Antetokounmpo took over in the final period to extend the Milwaukee Bucks' win streak to 17 straight games, beating the home team, 127–114. The Bucks improved to 23-3 on the season.

Jaren Jackson, Jr. had the best game of his young career, setting several franchise and NBA records with a monster third quarter. Jackson had a career-high 43 points, while going 14 of 21 from the field. He scored 26 points in the third quarter and connected on 9 out of 15 three-pointers for the game, tieing a Grizzlies franchise record.

"WHAT A 3-POINT EXHIBITION!"

Jaren Jackson Jr. ERUPTS for 26 PTS, 7 3PM in the 3rd quarter for the @memgrizz! ☔️☔️☔️ pic.twitter.com/ldhjQxTJNv


Tyus Jones was in awe of his teammate’s performance: “Big time, but we know that’s what he’s capable of . Those performances are special.”


“Jaren Jackson (Jr.) is obviously a stud," said Bucks coach Mike Budenholzer, adding, “It was a pretty incredible individual performance from the three-point line, and everywhere.”

Antetokounmpo couldn’t believe what he was seeing while he was sitting on the bench in the third quarter. “Someone’s got to stop him,” he said. “He made seven threes and when I was out, he made five. I’m thinking that I have to come back in. I got to help my team.”

Antetokounmpo continued, “This is where the leader of the team takes a step forward. That’s what happens when he makes seven. You just got to execute and win the game. Tried to stay focused and know that I was going to come back in the fourth quarter.”


Historical Stats for Jackson
Jackson became the youngest player since Brandon Jennings on Nov. 14, 2009, to score 40 or more points in a game. He is also the youngest player in NBA history to make nine three-pointers in a single game and is the only player under 21 to do so.

Jackson’s 26 points in the third quarter set a new franchise record for most points scored in a quarter, passing Troy Daniels and Greg Anthony (22, each). His 26-point third quarter is the third most in a quarter in the NBA this season, behind James Harden (29) and Zach LaVine (27).

Jackson's nine 3-pointers tied Mike Miller for the Grizzlies' record for most in a game. Miller did it twice in the 2006–2007 season. Jackson's seven 3-pointers in the third quarter set a new franchise record for most threes in a quarter. Daniels held the previous record with six.

The Michigan State alum’s 43 points tied Pau Gasol for the third-most points scored by a Grizzlies’ player in franchise history. Miller holds record with 45, followed by Pau Gasol with 44.

.@jarenjacksonjr ran his streak of games with 1+ 3PM and 1+ BLK to nine straight tonight, a @memgrizz franchise record.

That is tied (with Giannis Antetokounmpo) for the longest such streak in the @NBA this season. https://t.co/yIIg4Bj1Yi

Dillon Brooks finished with 19 points and three assists while going 4-of-7 from deep. He is averaging 24.3 points, 5.9 rebounds and 1.9 steals per 48 minutes this season.

Jae Crowder recorded a double-double with 15 points and 11 rebounds, plus four assists.

Giannis Antetokounmpo tallied a double-double with 37 points (17 in the fourth quarter), 11 rebounds, and two assists on 12-of-23 shooting.

Ja Morant and Brandon Clarke sat out due to injury/load maintenance.

The Grizzlies now have lost seven straight games on the home floor and are 8-17 on the season, overall.

Quotes from Jaren Jackson, Jr. on his historic night:

On whether he has ever had as good a quarter as he had in the third:

“No. There hasn’t been anything like that, because just everything for a minute was going in for me. I felt like just a crazy rhythm and the basket got bigger. It just felt good.”

On when he realized he was having a great game in the third quarter:

“Probably the banker. The banker was just like, ‘Thank you for the backboard being there,’ because otherwise, I would’ve air-balled it. That one was cool.”

On going head-to-head with Giannis Antetokounmpo:

“He’s just a great, great player coming at you with a full head of steam. You’ve got to pick your battles a lot. Tonight he was hitting the three a little bit, so you had to plan certain ways, doing euros trying to get around him and stuff. I always like that match-up though. He’s a great player.”

On what changed in the last seven minutes of the fourth quarter:

“Giannis (Antetokounmpo) kind of took control of the game a little bit more. Throughout the game, we were putting him at the free-throw line and we kind of gave up a lot in there. At the time we had our drought, they picked it up, so it was kind of just bad timing, honestly.”

“I guess I always have confidence, just by the work I put in. In terms of shooting and getting my balance right and just getting my feet right so that I can make those shots when it’s harder and it’s like a hand up.”

On how he is attacking the ball differently now versus at the beginning of the season:

“My teammates are finding me a lot more in terms of the three-point line. They’re finding me in better spots and they’re looking for me a lot more, so that helps. Definitely in the summer, just working on my balance and working on having to get it off quicker because you have to get your release quicker and your feet down set. So, when you do that, you can take deeper ones and if it goes in, it goes in.”

Up Next
In a home back-to-back, the Grizzlies will face Bradley Beal and the Washington Wizards at FedEx Forum tonight at 7 pm CST. Ja Morant and Brandon Clarke are expected to return to the lineup tonight.