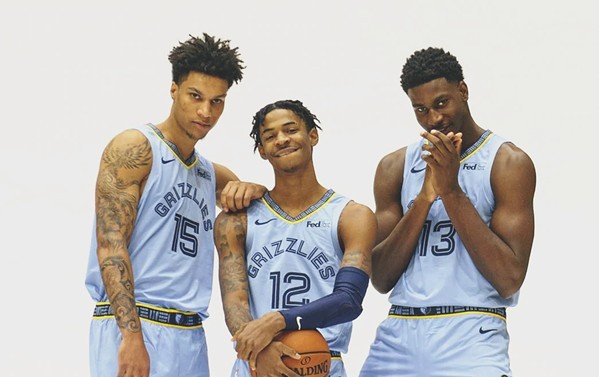 Brandon Clarke went up against teammates Ja Morant and Jaren Jackson, Jr. in the NBA Rising Stars game. Clarke started on Team World while Morant and Jackson started on Team USA. The game began with Morant lobbing to Jackson for a bucket, but Clarke had the best stats of the trio.

After the game, Clarke spoke to the media about playing against his teammates. “I was just kind of in awe watching them really,” Clarke said about Morant and Jackson. "So I wasn’t really telling my teammates what they were going to do. I actually would just say, 'Jaren is pulling left heavily,' which he did. But that’s pretty much it.”

Clarke added “It’s kind of cool guarding Ja, because I see why he is so tough to guard. I think he had a really good finish going left on me and I see why that shot is so hard to block. I’ve seen Ja do that move so much going left and doing that double layup and I still couldn’t stop it. So it shows how hard it is to guard him.”

Ja Morant talked about playing against Clarke.  “Brandon [Clarke]? It definitely was,” Morant said when asked if it was odd playing against his teammate. “I kind of knew what he was going do, though. So, I got out of the way on a couple dunks. I tried to box him out early because I know he likes getting rebounds and then dunking it back.”

“We are just young, very athletic and just get out and run,” Morant said about the Grizzlies team. “I feel like we all have something to prove. We just go out with this chip on our shoulder. We keep proving people wrong.”

What was it like to play with all those guys you have never played before?
It was nice. I mean, like they said, Rising Stars. That’s what this game is for, for guys coming up in the league trying to be big-time players. Definitely special playing with the best young talent in this NBA.

Can you talk about your first NBA All-Star experience?
It was just having fun. I attack every game the same way. Obviously today is not the same as playing with the Grizzlies, but still have fun.

Any butterflies for this game?
No, I don’t even get nervous for games anymore. I feel like at the end of the day, it’s basketball and there is nothing I should be afraid of, because whoever I’m going against put on their shoes and stuff the same way I do.

How do you feel about being in your first NBA All-Star and doing all the NBA Cares stuff in this city and the message it sends to the local youth?
It’s special. Had fun, enjoyed every bit of everything that I was involved in this weekend. Hopefully, I’ll be in a lot more.

What kind of things are you looking forward to this coming weekend?
Enjoying it, that’s it. Having fun. It’s my first one. My family is here and we are all going to enjoy it.