by Sharon Brown and Aimee Steigemeyer

December 23, 2020
comment
The 2019-2020 season for the Memphis Grizzlies was anything but ordinary. The team started off slow but figured things out and then took the NBA by surprise. Griz guard Ja Morant found his groove and proved he belonged in the league and everyone took notice. The Murray State alum eventually went on to become the NBA Rookie of the Year.

Memphis is still hungry and has the desire to prove doubters wrong in the
upcoming season after being underestimated again. The team will have a mighty hill to climb without the immediate services of budding star Jaren Jackson Jr. (left knee meniscus surgery recovery) and Justice Winslow (left hip displacement).

Prior to Wednesday night's season opener against the San Antonio Spurs, Aimee Stiegemeyer and Sharon Brown discuss seven key questions for the Grizzlies this season.

This will be Year Two of the rebuild. What are your expectations for the #GrzNxtGen team this season?
Aimee Stiegemeyer: Truth be told, they are already leaps and bounds ahead of what anyone would have expected from a franchise rebuild in year two. I would like to see a continuation on the progress that was built last season, with a focus on defense, and turning that defense into offense on the other end of the floor. Preseason games might not be an accurate metric of overall performance, but it was promising to see the young squad not just force so many turnovers against Minnesota, but scoring off them as well.
Sharon Brown: This team defied predictions and finished well above expectations last season. I expect them to do the same this season. The players seem to have a chip on their shoulders are out to continue to defy the odds and prove the haters wrong. Their season will go as far as Ja Morant can take them in the absence of Jackson Jackson Jr and Winslow.

How would you grade the offseason moves made by the Grizzlies?
AS: I would give them a solid B+. They picked up a good young player in the draft in Desmond Bane. Re-signed De’Anthony Melton to a very reasonable contract. Did not make any ill-advised free agency signings that will hinder the front office’s ability to continue building around the young core of Ja Morant, JJJ, and Brandon Clarke.
SB: The offseason went about as I suspected. The Grizzlies have a certain type of guys who they want on the team with high IQ with no ego who can fit in the locker room. The key was signing De’Anthony Melton to an extension and building upon what they already have. The team is not in a win now mode and that’s a good thing. The offseason grade for me is B that might become an A in the near future.

Which player or players do you think will have a breakout season? 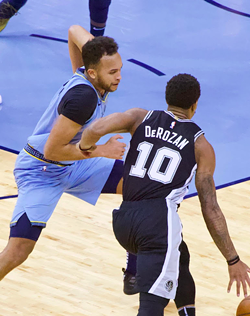 AS: Kyle Anderson. Anderson seems to be fully healed from the procedure he had on his shoulder, and it has shown in his performance in the first few preseason games. With Jaren Jackson Jr. and Justise Winslow both out for the foreseeable future, I see Anderson playing a bigger role with the starting unit.
SB: Dillon Brooks, only if he is consistent and become a better decision-maker on both ends of the court. Offensively, he needs to become a better facilitator and playmaker. He has to know when to pass the ball and get his teammates involved. Often, he has tunnel vision on the offensive end and can’t see when his teammates are open. Also he has to defend without fouling, Brooks led the NBA in personal fouls last season.
However, he has been working on his entire game during the offseason. In the four preseason games, Brooks was second in assists (14) behind Morant. It will be huge if that continues when games really matter. Big man, Jonas Valanciunas took joy in seeing Brooks pass the rock more. When asked about the teams 33 assists against the Atlanta Hawks in the final preseason games, JV said, “It’s fun to play that way. Sharing the ball is the key for us  —  even Dillon Brooks is passing the ball. That’s crazy.” It speaks volumes when his teammates notice he is sharing the ball more.

In the absence of Jaren Jackson, Jr. for the foreseeable future, will Jonas Valanciunas have a key role in the offense as he's paired with Ja Morant?
AS: I think that for the Grizzlies to build on the successes they had last season, Valanciunas will have to become more of an offensive contributor. He will almost certainly need to take on a larger role this year and I believe he is up to the challenge.
SB: Yes, Morant and JV will have to be the 1-2 punch in the absence of Jackson Jr. They have a great connection with the pick-and-roll and that's a major part of the reason the Grizzlies led the league in paint points (55.9 per game) last season. The offense shouldn't settle for threes and go inside more when shots aren't falling. JV also has been passing the ball more and having good assist numbers, so that will help on offense as well. Maybe JV can throw some lobs to Morant this season.

How well will Memphis fare in the loaded Western Conference?
AS: This is another time when I am hesitant to speculate, but provided Jaren Jackson Jr. returns to his pre-injury form and the Grizzlies can avoid any major injuries — I don’t think a 7th or 8th seed is out of the realm of possibility. A healthy Grizzlies team can absolutely build on the success they had last season.
SB: My prediction is finishing between the 7 and 12 spot in the standings. The West is so unpredictable because of so many good teams. Hopefully, Jackson Jr. and Winslow are the pieces the Grizzlies are missing to go to the next level. The players have something to prove again, despite performing above expectations last season. They will continue to grow and continue to show they can compete with the best in the league.

It's year two for the reigning NBA Rookie of the Year, Ja Morant, what areas of improvement do you think he should work on?
AS: Safe landings after dunking! Morant has such tremendous athleticism and court vision, and he plays with a level of physicality that rivals players who have many more years of experience in the league. His fearlessness is certainly a positive thing but I have been uncomfortable at times watching him land in ways that could contribute to serious injury.
SB: Morant needs to be a better defender; he had a tough time guarding CJ McCullom down the stretch in the play-in game against Portland last season. During a recent Zoom conference, Morant said one of his goals this year is to be a better defender. He wants to be a two-guard like Brooks and De’Anthony Melton. Morant has to be a better pick-and-roll defender or teams will exploit him every time. He also should work on his three point shot. During his rookie campaign he shot 48 percent from the field but managed only 33.5 percent from beyond the arc.
Also I wish for him to be a little more selfish, but I know that’s not him. His focus is to make his teammates better but there are times when he shouldn’t defer. Last season, as Morant was the seventh-best scorer in the league in the final period. He averaged 54.9 percent from the field! If he could turn it on earlier in games, it would be beneficial.

What are your expectations for Desmond Bane in his rookie season?
AS: He’s clearly got a very high basketball IQ, which I think will help his transition from collegiate play to the NBA. Based on his college career, he can play well both on and off ball, and his defensive skills will be a great addition. Bane might not be in the Rookie of the Year race, as Morant was last season, but I feel like he has the potential to be another great steal from the draft, much like Brandon Clarke has been.
SB: The TCU standout plays well on both ends of the floor. He fits the mold of the Grizzlies by being a high IQ player who plays hard and can knock down the three-ball at a high level. He shot 44.2 percent from three as a senior at TCU while averaging 16.6 points, 6.3 rebounds, 3.9 assists, 1.5 steals and 2.9 3-pointers per game on 45.2 percent shooting.
In the Grizzlies preseason games, Bane scored in double figures in three-out-of-four games. He should continue to become comfortable in his shot and learn from the veterans. I expect him to be go-to player on the bench and develop a good chemistry with Tyus Jones, Melton, and Brandon Clarke. He should fit right in with one of the best benches in the league.