Ja Morant Is Larger Than Life On and Off The Court

Longtime Grizzlies fan Roni Matthews was hungry and skipped breakfast so she could eat at the new restaurant Slim & Husky’s Pizza Beeria in downtown Memphis.

Matthews was caught off guard after seeing the 30-foot-mural of Ja Morant painted on the side of the establishment. She said, “I was pleasantly surprised to see how vivid and vibrant the colors were in the mural. It tugged on my heartstrings a little bit because it was like a symbolic confirmation for our city  —  our team — that our future is still bright despite the hurdles we have faced.”

“I would love to have actually seen how it started,” said Grizzlies season ticket holder, Carmen Patton after she visited the restaurant. "The artist kept looking at his phone so I’m assuming it’s modeled after a Panini poster maybe.”

Patton added, It blends in with the culture that Slim & Husky’s seeks to create. "You got hip hop blasting with a guy spray painting a mural of the Grizzlies' star basketball player outside. Then you go inside and see more murals of Memphis artists. It’s just a good vibe.”


Panini America, the official trading card partner of the NBA and NBPA announced an extension of its partnership with Morant. Panini is the exclusive home for the Morant’s autographed trading cards and memorabilia.


“We started our relationship with Ja (Morant) before the draft last year and we made him one of our athletes going into his rookie season,” said Jason Howarth, Vice President of Marketing at Panini America. “Coming out of his rookie season, he just continued to thrive, we knew that he was the guy that we wanted to put a foothold around, and we decided we wanted to make him a long term exclusive athlete of Panini for trading cards and memorabilia.”

“Once we got to that we wanted to celebrate him and, and really do something a little bit different in terms of how we approached and announced the relationship,” Howarth recalls. “We decided a mural in Memphis would be a great location to celebrate him and highlight him as he continues to progress in his career with the Grizzlies. We built that idea around one of our trading cards — our color blast trading card – and then, it was off to find a location and find an artist.”

Howarth said the color blast card was an iconic card for Morant’s rookie season. The company wanted to find an artist who could hone in on the specific colors to bring a small piece of cardboard to life in a 30-foot canvas on the side of a building in downtown Memphis.

This is the first mural that Panini has commissioned for one of its athletes.

Bullock says he noticed a few of the people from Panini had started following him on Instagram. Then he said Howarth followed him and shot him a message. “I was just like, wow, okay  —  this is could be something, you know,” Bullock said. “And what was crazy was, he introduced the project, and he didn’t say what it was and he was looking to partner with an artist on a private project with his company.

It was an instant yes for Bullock even though he was unclear what the project was about. “I had a lot of projects going on. But he kind of hit me up at the time where I’m like, in this waiting period,” Bullock said.

Bullock has about 30 or 40 murals around Memphis and surrounding areas, and has been featured in Essence Magazine, on ESPN, Netflix' Uncorked, The Trap Music Museum, and more.

In 2019 Bullock was commissioned for a project in Frayser to build awareness against trash dumping titled “Stand Up For Our Streets”.

That same year, the former Shelby County Schools art teacher completed a historic project sponsored by ServiceMaster that was unveiled on January 17, 2020. He transformed the cafeteria of Bruce Elementary to tell the story of the Bruce 3 who were apart of the Memphis 13 that help integrate Memphis City Schools. 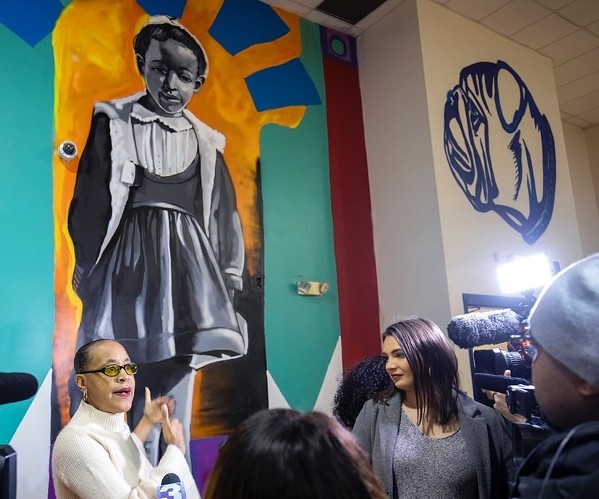 Bullock was excited when he found out he would be working on a mural of Morant after a Zoom meeting with Howarth. The hard part was nailing down the right location. On his reconnaissance mission to find a location, Bullock says he was snapping photos of possibilities, and sending them to Howarth.

“We landed on Slim and Husky’s through the grace of God,” Bullock explained. “So I met with the owners of Slim and Husky’s to discuss doing some interior artwork. And during that meeting, I brought up the Ja Morant project.”

“It was it was one of those situations where it was an instant, yes,” Bullock continued. “Those guys are fans of Morant and said it would be a perfect location for the mural  —  he’s the future of the league. You know, why not? It worked out perfectly once we got to Slim and Husky’s. It was an incredible feeling to know that that was honestly the only hard part of this entire process. You know trying to make sure we nailed a location that was visible and also was accessible to the public.”

Bullock spent seven days working on the project before it was unveiled on December 21.

“For me anytime I can create a mural, or install a mural, it’s an opportunity for someone to share a story," Bullock says.  " I think Ja Morant has an underdog story. In a city that’s an underdog, he’s showing that an underdog can win. And I think this mural is allowing people to tap into that type of belief for themselves.

"Some people may not know who Ja Morant is, but once they figure out who he is and find out his story, they’re gonna fall in love with him and the team. In the city we’re in, he’s a symbol of hope. And he has this explosive, aggressive basketball playing ability. When people see this mural, they’re gonna see that is larger than life, just like his abilities.”

“For a city like Memphis a majority-black city, a lot of times, you can go into a museum and not see someone that’s African American. To showcase such a player at the level of Ja Morant, who happens to be African American, to put him on the outside of a building larger than life — it makes a statement.”

On a media availability Zoom call, Morant was asked about the mural. He said, “It means a lot, especially for me being here only a year and things like that are already happening in the community. As far as me going to see it, it’s emotional. I’m thankful and grateful for it all. Really can’t say nothing besides that I’m blessed. As much as Memphis loves me, I love Memphis.”

Memphis You Embraced Me From Day 1. So blessed to be a part of this City #GrindCity & to announce my exclusive partnership with @PaniniAmerica who would celebrate me like this. Go check it out! #GRZNXTGEN🏀 #whodoyoucollect pic.twitter.com/JtY3PIogYb

Bullock says it was an honor to see that Morant was happy with the finished product. “To paint someone that’s still living you get to see their reaction, especially dealing with a portrait of this magnitude, you want the person to be happy with their resemblance. He was just like, 'Man, I can’t believe this — I got my own mural.' I was super excited to just see him in person and see his response, because I was thinking if he says it doesn’t look like him, I might have to rearrange his face.”

He says Morant was impressed to see his tattoos on the mural and told him he did a great job and said he wished he could paint like that. Bullock said, “I told him we all are given gifts and yours is dunking over people.”