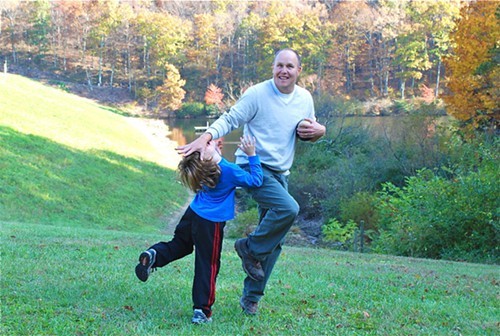 It's short. It's fast. It's topical. It's got a traditional hero to cheer for, says its author. It's Love's Winning Plays (W.W. Norton) by novelist Inman Majors (pictured, in a warm family photo by Christy Majors).

But where are the student players in this, Majors' great comic sendup of Southeastern Conference football? There are no student players — on or off the field. And where are the football games? There are no games — except for the ones played between a powerhouse university football program and its friends — or are they foes? Loyal fans, demanding alumni, smarmy sportswriters, and chat-room screwballs.

The hero to cheer for here: He's technically not even allowed on the field during games or during practice. He's Raymond Love, an off-the-field graduate assistant majoring in sports management who'd like to graduate into a position as on-the-field coaching assistant. But he's competing against a guy named Sparkman, who, as a slick super-brown-noser, knows he's perfect for the position. And there's nothing browner than the nose on Sparkman's face when he's in the vicinity of Von Driver, the school's head coach whose passion for Bon Jovi is second only to winning bowl games and delivering (bare-assed) locker-room chitchat or inane (but fully dressed) booster-club pep talks.

Keeping track of Woody's whereabouts (hard); keeping Woody away from the bottle (harder); keeping Woody's favorite toilet paper handy (easy, once you learn it isn't Angel Soft or Quilted Northern, it's Charmin); keeping Woody within earshot of his favorite tunes — grand opera to classic country (no problem): Woody's in charge of the car CD player. He's also a real gentleman if your career needs a kick or when things need an airing. That noxious odor that's suddenly filled the car — "as if a sewage treatment plant had married a paper mill and produced a noteworthy offspring"? "A goulash made from rotten eggs, guano, and sun-ripened monkey cages"? No, worse. But: "Sorry about that one, partner," Coach Woody, rolling his window down, politely apologizes to Love.

Where's the love interest in Love's Winning Plays? It's a no-brainer to anybody with half a brain, but take your pick. Love ends up having to in a contest between Brooke, the school athletic director's daughter, who's talked Love into becoming a member of her book club (latest title: The Bon Bon Girls, food recipes and topics for discussion provided in its pages), and Julie, Love's grad-school girl pal, who's smart (and patient) enough to see through Love's doomed puppy-dog pursuit of Brooke. Barbara Driver? She's a flirt, she knows it — and knows too to act the gracious wife of the head coach when duty calls, and for Barbara that's the Pigskin Cavalcade, which she spends in pursuit of Love and the next cocktail.

On Thursday, October 11th, spend some time with Inman Majors too, when he signs Love's Winning Plays at the Booksellers at Laurelwood beginning at 6 p.m. (Check out his very fine Swimming in Sky, Wonderdog, and The Millionaires while you're at it.)

I recently spent some time with Majors, who was speaking by phone from his home in Virginia, where he teaches at James Madison University. The questions for discussion ... Screw the questions. Here's Majors on writing Love's Winning Plays, on family football, on favorite pet peeves, on literary advice, and, with little prompting from me, on a roll. Highlights:

Inman Majors: This guy Love ... he's earnest ... my first earnest protagonist. That's helped with reader reaction to the book, which has been been really good. And it was the most fun book I've written. My last novel, The Millionaires, was a big, complicated book that took four long years to write. By the time I finished it, I was tired. But I didn't want to go too long between books. So I thought: I'm gonna write something fun. I've watched a ton of football. I've been around it my whole life. So the book kind of wrote itself. And I was on sabbatical part of the time, so it came at a perfect time. Even I could sit there and chuckle.

I was working with understatement, very sly, kind of a Wodehouse-ian tone.

And I was satirizing stuff that really gets on my nerves, like sportswriters. Some of them don't really like sports or athletes at all. They dwell on the negatives. Chat-room people, the experts who anonymously slam coaches and players, the flamethrowers ... That stuff really crawls up my skin. Now I just find all of it funny.

Instead of slamming something ... If you expose it as ridiculous, you've achieved the same purpose. You can score points by keeping it tonally light. So the challenge was to avoid any harshness of tone. That kept me in check, and it's the reason the book is so tight, controlled. But it's also breezy, to appeal to a large audience. And it's been rewarding to hear from so many women readers. This is a romantic comedy. It's a football book. But I don't think it's a jock book.

No, it's not a book-club book. Nobody's gonna confuse this book with The Help.

Growing Up in the Majors

I've heard, down the years, so many good stories from my dad and my uncles [Bobby and Bill Majors, who played for Tennessee; Larry, who played for Sewanee] about their teammates and coaches. Guys like Coach Woody, for example: dead honest, what you see is what you get.

And I've been to these reunions with my grandfather's old Sewanee players. [Grandfather Shirley Majors: head coach at the University of the South from 1949 to 1957] And stories from my dad. [Joe Majors: former football star at Alabama and Florida State; former Tennessee state representative, later a Tennessee lobbyist]

When I was growing up, I liked it. Most of the time it was great. I had lots of perks. Any boy in Knoxville would've liked to do what I got to do. But it would get old sometime. You hear some drunk grownup yelling at your uncle [Uncle John aka Johnny Majors: University of Pittsburgh coach; coach at the University of Tennessee from 1977 to 1992] that was inappropriate or you read nasty things in the paper.

People ask who I cheer for now. I went to Vanderbilt as an undergraduate and to Alabama for grad school. I want both those teams to do well, but I wasn't a Pitt fan or Tennessee fan unless my Uncle John was coaching there. You go to these games: You're kind of with that team but not of them. Because you've got a relative who could get fired at any time. Are you going to keep up your allegiance to that school? I'm not, not the same kind of allegiance.

Now, I just like to watch football. If Vanderbilt or Alabama or Tennessee loses, I wish they'd won, but I don't think 10 seconds about it.

That surprises people. My uncle at UT was treated well, and this is just me but I'd be thinking: Were the fans at a game going to boo my uncle or cheer for him? Write nice or nasty things? For me, it was a whole different way of following a game.

I didn't play football at Vanderbilt. Maybe I could have at a place like Sewanee or Millsaps, but I would've been an average player even there. I wasn't big or fast enough to play college ball.

Barbara Driver: I like her. She's an adventuress, but she has her pride. And she's not sloppy. She knows what she's doing.

Coaches' wives, coaches' children have a tough role to play. You're in the public eye without any control of the situation. You inherited that role. I've got a lot of empathy for those folks.

No, I try to do something new every book. So, no sequel. Part of the fun of writing is surprising yourself. I may have general ideas about a character and maybe a premise, but I'm following the book, not the one leading.

And just as Faulkner said: "I knew I had a character when he stood up and cast a shadow." He meant the characters are no longer two-dimensional, they're three-dimensional. They have a volition of their own. That, to me, is exciting.

That small scene in the car with Coach Woody: It's totally formal in tone, dead serious. I learned that trick from the Brits: formal language for a low situation, it's the juxtaposition. And as I also say to my students: If you have two or three or five truly great parts in a book, they're gifts. The parts you struggle with are never as good. The gifts just come, but they only come when you're surprised. Because when it's going good, you're not thinking, your fingers are just going to town. It's subconscious. Your mind's not there. You're not there.