David Williams: Under the Spell 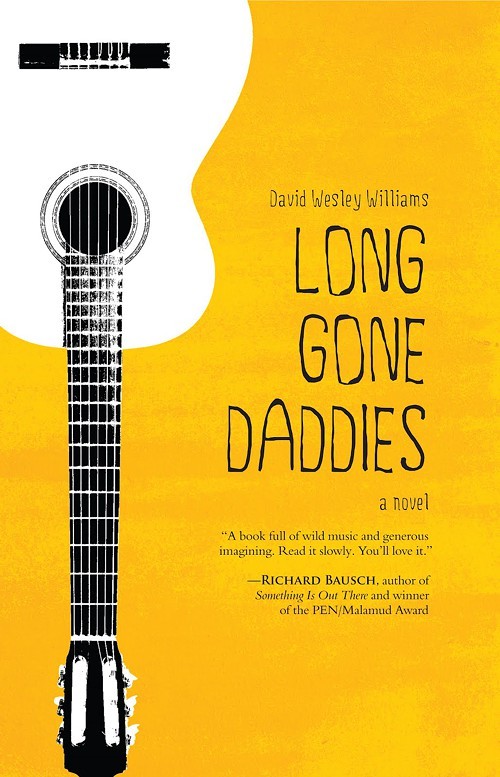 "Newspaperman on their time, fiction writer on mine."

That's how David Wesley Williams describes the writing life — his life. He's served as sports writer and now as sports editor at The Commercial Appeal for 25 years. But he's a writer of short stories and novels too. And this week sees the publication of his debut novel, Long Gone Daddies (John F. Blair, Publisher), on March 5th, which happens to be the 50th anniversary of Patsy Cline's death — an important date given that Long Gone Daddies draws on the music that Williams loves most: country classics, Delta R&B, and early Memphis rock and soul.

The novel launches with a signing at The Booksellers at Laurelwood on Wednesday, March 6th, at 6 p.m. Then the author is off to Lemuria book store in Jackson, Mississippi, Lorelei Books in Vicksburg, followed by the Arkansas Literary Festival in Little Rock in April. Of special note: Williams will be reading in Oxford on March 28th as part of the Thacker Mountain Radio program at Off Square Books, an event broadcast live on Rebel Radio 92.1 FM.

That's how Williams, in a recent phone interview, described the Thacker Mountain gig, which combines literary readings and musical performances, which, in turn, makes it a fine fit for his novel. It's the story of a grandfather, a son, and a grandson, each of them the owner of a 1930s Cassandra Special Rider guitar, which is handed down from Malcolm to John to Luther Gaunt. The goal of each man: to make it out of Pennsylvania and onto the gritty Memphis music scene, circa the early '50s, the '70s, and the late '90s.

The novel's "soundtrack" — Johnny Cash to Carl Perkins to Otis Redding — is one thing. The lyrics of Luther Gaunt, scattered throughout the narrative, is another. But this is equally a story of fathers and sons and wives and of a girl named Delia, another named Wanda, and third named Ida. Williams has the rhythm of these lives sounding just right, his distinctive prose style as lyrical as any lyric in song.

How does it feel, though, for Williams — who won the Memphis magazine fiction contest for his short story "Memphis Minnie's Ashes," in 2002 (a story that forms the first chapter of another completed but unpublished novel) — to have Long Gone Daddies at long last in print? Turns out, it's a lot like "Cassie," that Special Rider:

"It's pretty cool. You get to hold it in your hand," Williams said of the book. "I wrote the first draft back in 1998. The basic story was there. Then I spent a 15-year process of rejections, rewritings, editings, cutting, going from first person to third and back to first.

Then John Blair publishing came calling, out of North Carolina.

"I told my wife, if this doesn't come through, I'm pretty much done with this book. I'll have to write another one, go through the whole process again. But Blair made an offer, and working with editor Steve Kirk has been a great experience. He was careful, wise with suggestions."

Any suggestion in Long Gone Daddies that Williams resembles any one his characters?

"You could say I identify with Luther — not his family history, what he was going through, but he's drawn to the music, the dark side, the devil's music. He wants to be a good man. He throws himself into that struggle. And I admire that.

"But unlike Luther, I can't play a note. You think anybody could take guitar lessons and learn to scratch out a song. But I even type with two fingers! And I don't have any rhythm. I'd give up whatever writing talent I have just to play garage-level guitar. I figure writing's the thing I can do, so I'll do that. But I certainly listen to a lot of music."

Williams also listens to his wife, Barbara. The two met in York, Pennsylvania, where they worked for the town newspaper. Williams, who grew up in Kentucky, worked first for his hometown paper, then for the paper in York, then moved to Memphis in 1988 to cover sports for The Commercial Appeal. Barbara, who's also worked for the CA, and the couple's newborn followed a couple weeks later. It was Barbara who made sure Williams kept Long Gone Daddies moving:

"Barbara is a big reader, her favorite writer is Charles Dickens, and she hammered home the fact that you've got to pull readers with a story. They want the story.

"This isn't the most plot-driven book in the world, but, believe me, there's more story now than there was to begin with.

"The writing comes first with me, not the plot. So, in early versions of the novel, there wasn't much story at all. It was the characters and the writing and the music. It took years, but I had to embrace the idea that in a novel you need a story."

Just as David Williams had to embrace the idea of being a "real," practicing writer. The Moss Workshop in Fiction at the University of Memphis, under the guidance of writer Richard Bausch, was critical.

"Until that workshop, I'd been a complete outsider. I hadn't gone through an MFA program. I didn't know any writers. Richard was the first writer I really got to know.

"I don't know if you can teach writing, but Richard encourages. He prods. He says, "You've got to do the work. Did you work today? Did you write today?

"And he makes you feel worthy — that you are a writer, you need to be doing this, you can do this, get up and write each day. With Richard, you're all in a room talking, you're all writers. That was a real eye-opener for me. He's an amazingly talented guy. He can tell a great joke too."

Williams maybe can't play a note, but he can play a mean game of tennis. And that includes winning over, on the court, a fellow Kentuckian.

"Yeah, that story's true. George Clooney and I grew up in neighboring counties, and we're about the same age. We played a tennis tournament, and I beat him. Then he went on to do what he did. I went on to do what I did. He was a good guy."

And Memphis has been good to David Williams. It's formed him as a writer. And, despite a major plot point in his novel, he isn't about to get into the Memphis versus Nashville debate. But, still ...

"I like Nashville, especially older country. Hank Williams. Patsy Cline, before they made her into a torch singer. Nashville has cool stuff in it. But I like Memphis better. I fell under the spell of its music, the Delta, all the South."

Yes, he did. Go to Long Gone Daddies.