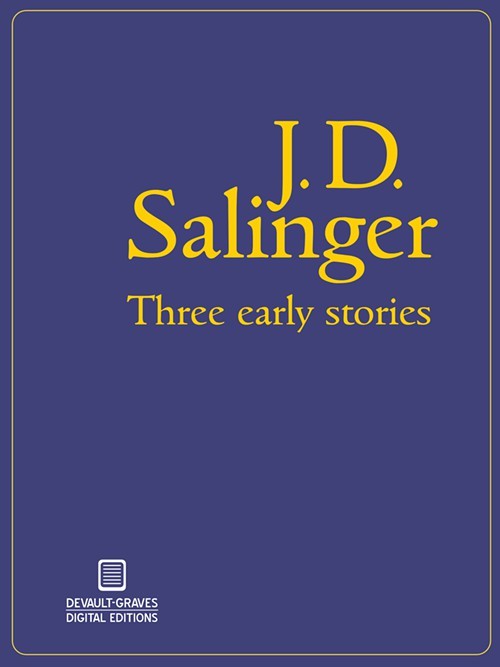 It’s official: On the evening of May 21st, fans of J.D. Salinger could do something they couldn’t do before: Go to Amazon, type in “J.D. Salinger” and “ebook,” and download the result onto their Kindles. This makes Three Early Stories (for $9.99 and at just under 80 pages) the first time Salinger’s been made available in ebook form, and readers have Memphis-based Devault-Graves Digital Editions to thank.

The collected stories in Three Early Stories are:

“The Young Folks” (originally published in Story magazine in 1940, the first time Salinger saw a story his in print); “Go See Eddie” (from University of Kansas City Review, December 1940); and “Once a Week Won’t Kill You” (Story magazine, November-December 1944). Illustrating the stories is New York-based Anna Rose Yoken, daughter of Memphians Tony Yoken and Pamela Denney, dining columnist and food blogger for the Memphis Flyer’s sister publication, Memphis magazine. (Shown below: one of Yoken's illustrations for "The Young Folks.")

All three stories are notable for what they reveal of Salinger’s early debt to Hemingway and as early indicators of Salinger’s style. In “The Young Folks,” the banal cocktail-party chatter between a young woman and a college boy says far more to the reader than that young woman and student know themselves. In “Go See Eddie,” the erotic charge between a man and his sister is unmistakable, the threatening undertones of their exchange made suddenly manifest in a single, alarming gesture. In “Once a Week Won’t Kill You,” by a writer who’d seen more than his share of World War II horrors, a man prepares to enter the service — and prepares, perhaps, his wife and mentally failing aunt (and himself?) for the possibility of personal tragedy.

According to Tom Graves, who co-founded The Devault-Graves Agency with business partner Darrin Devault, publishing these three Salinger stories was the ideal project for an agency whose mission is to bring neglected titles, out-of-print titles, and uncopyrighted titles to the reading public in a polished ebook format.

in the past, Devault-Graves has “rescued” the autobiography of the photographer Weegee, collections by celebrity profiler Rex Reed, and a novel by noir master Jim Thompson. The company’s biggest seller has proved to be Big Sur by Jack Kerouac. But in the case of Salinger, Devault-Graves is planning to go beyond ebooks. A print edition (the agency’s first) of Three Early Stories is scheduled for June, Graves said by phone this past week.

“We’ve been a little hush-hush about all of this,” Graves said, “but we’re really proud of Three Early Stories. We only went ‘live’ with it on Amazon on Wednesday night. It’s a coup for us” — an enterprise Graves compared to David (Devault-Graves) vs. Goliath (the larger publishing world). “We want word of it to build.”

What Graves didn’t want was a cover that too closely mimicked the one for the famous paperback edition of The Catcher in the Rye, which features simply the title and author’s name on a solid maroon background. But he and Devault did ask that graphic artist Martina Voriskova keep the cover of Three Early Stories equally simple. What Graves would like to emphasize, however, is that Three Early Stories is (as stated on the book's Amazon page) "the first legitimately published book by J.D. Salinger in more than 50 years."

Bootleg, unauthorized, and editorially sloppy versions of Salinger’s stories have been leaked before. “Leaked” is not the word for Three Early Stories. Legitimacy is.

The stories were never (“ever,” according to Graves) registered to Salinger. Three Early Stories with its illustrations — together with high editorial standards and clean layout — means that the Devault-Graves Agency has its own copyright to the edition. It’s the business of the agency to do the deep research to obtain and secure that right.

“Long-term, we hope to build a lasting reputation for the excellence of taste in our book selections and for producing a quality ebook product,” Graves said.

And who knows? Three Early Stories by J.D. Salinger could be just the "coup" to put Devault-Graves on the big map. •