The Constitution: “In Conversation” 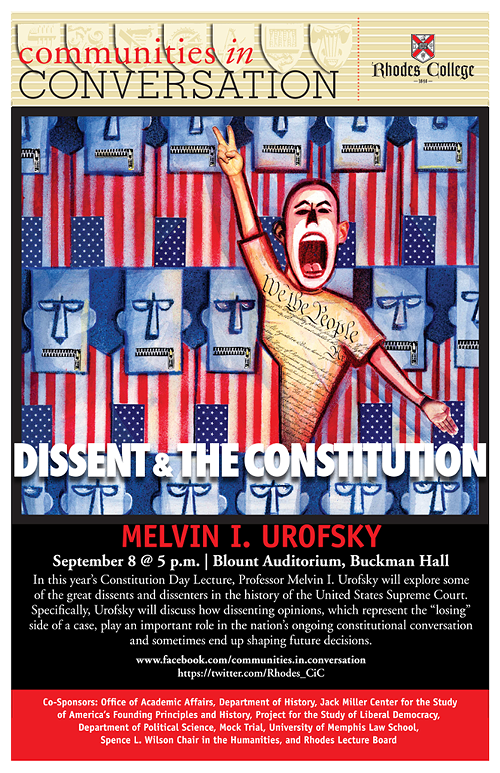 When it comes to U.S. Supreme Court decisions, it’s sometimes more useful to look to the losing side. That’s because dissent — the minority opinion — often ends up shaping future Supreme Court thinking and determining subsequent court cases in what amounts to an ongoing “constitutional conversation.”

In honor of Constitution Day 2014, welcome, then, the opening guest speaker in the annual “Communities in Conversation” lecture series at Rhodes College: Melvin I. Urofsky. Urofsky’s lecture, “Dissent & the Constitution,” is today, Monday, September 8th, inside Blount Auditorium of Rhodes’ Buckman Hall at 5 p.m.

Urofsky, professor of history at Virginia Commonwealth University, has written extensively on the Supreme Court, its justices, and one justice (and famed dissenter) in particular: Louis D. Brandeis. He edited the multivolume Letters of Louis D. Brandeis and wrote the biography Louis D. Brandeis: A Life.

Melvin Urofsky’s lecture is free and open to the public, as are all the lectures in the “Communities in Conversation” series.

For more on this semester’s lineup of speakers — October 23rd: Michael Roth, president of Wesleyan University, on the value of a liberal arts education; November 13th: James LeSueur, of the University of Nebraska, on Algeria’s civil war in the 1990s — go to Facebook.com/Communities.in.Conversation or @Rhodes_CiC or contact Jonathan Judaken, the Spence L. Wilson Chair in Humanities at Rhodes, at judakenj@rhodes.edu. •