“Art is passion. You do it because you have to; it is your breath, your lifeline. But how far would you go for your passion? Would you kill for it? Steal it? Destroy it? Or protect it at all costs?

International journalist Lisa Barr, who once served as an editor at The Jerusalem Post, wrote the above words in an essay on Huffington Post this past July — an essay on the so-called degenerate modern art despised by Hitler, the same art that was looted, when not destroyed, by the Nazis and is being recovered to this day.

Barr’s essay also touches on historical events and universal themes that her fictional characters face in her debut novel, Fugitive Colors (Arcade). Those characters include an American painter in Paris in the 1930s, his two artist friends, and the woman who serves as model and muse and source of jealousy. Meanwhile, the father of one of those friends is ready to carry out the campaign against modern art — and artists — in Hitler’s Germany, with his son soon to join him in that campaign.

The novel, which came out in the fall of last year, won the Independent Publishers Book Award gold medal for Best Literary Fiction 2014. And on Wednesday, November 12th, Memphians will have the chance to meet Barr when she visits the Memphis Jewish Community Center.

Fugitive Colors is MJCC’s first “community read,” and Barr’s visit is part of the center’s 2014 Jewish Literary and Cultural Arts Festival, which continues through November 23rd. Barr will be on hand to discuss Fugitive Colors, answer questions, and sign copies on Wednesday the 12th. The event begins at 7 p.m.; tickets are $13, $10 for MJCC members. For more information, call the center at 761-0810 or go to jccmemphis.org.

International adventurer Richard Halliburton was a best-selling travel writer in the 1920s and ’30s, and it’s no exaggeration to say he was at that time the most famous Memphian in America. Relive his life — cut short when Halliburton, age 39, was lost at sea — in the compact biography The Forgotten Adventures of Richard Halliburton: A High-Flying Life from Tennessee to Timbuktu (The History Press) by R. Scott Williams. Have a good look at his life too in the book’s more than 70 photographs (many of them previously unpublished) archived at Rhodes College, where Halliburton tower serves as a memorial. 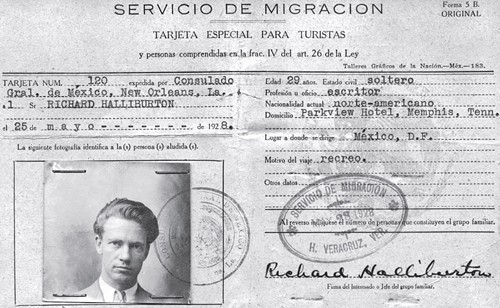 Like Lisa Barr, Williams is a journalist (degree from the University of Memphis), and he went on to become director of marketing at Graceland. Today, he heads marketing and communications initiatives at the Newseum in Washington, D.C. And again like Barr, he has a book signing in Memphis the night of November 12th.

Williams will be signing and discussing The Forgotten Adventures of Richard Halliburton at the Cotton Museum (inside the Memphis Cotton Exchange Building, 65 Union) on Wednesday from 5:30 to 7:30 p.m. The next day, he’ll be in Brownsville, Tennessee (birthplace of Halliburton, before the family moved to Memphis), at the West Tennessee Delta Heritage Center, from 5:45 to 7 p.m.

On Saturday the 15th, 2 to 4 p.m., the Booksellers at Laurelwood will be hosting a book release party for Williams and for Bill Short, associate director of library services at Rhodes, who guided Williams through the school’s Halliburton collection.

And to wrap things up on Saturday, Williams will be at Earnestine & Hazel’s (531 S. Main) beginning at 7 p.m. in support of the Cotton Museum, which will be having its eighth annual Harvest Party fund-raiser. Tickets are $75 for Cotton Museum members; $100 for nonmembers.

For more information on the Harvest Party and for tickets, call the museum at 531-7826 or visit cottonmuseummemphis.org. For an excellent preview of The Forgotten Adventures of Richard Halliburton, go to HalliburtonBook.com.

In April 1931, Richard Halliburton and his pilot, Moye Stephens, set off in their biplane, the Flying Carpet, from a French Foreign Legion airstrip in Algeria. Their destination was Timbuktu, and to get there, they flew over the Sahara, a journey Halliburton went on to describe in his book The Flying Carpet.

Sixty years later, Algeria wasn't the setting for a couple of adventurous Americans. It was the scene of a decade-long civil war pitting Islamists against the Algerian military, democracy against authoritarianism. Numbers are hard to arrive at, but one BBC report estimated more than 150,000 people died in that war.

James D. Le Sueur, professor of history at the University of Nebraska-Lincoln and a senior associate member of the Middle East Centre at St Antony’s College, Oxford, undoubtedly has his own estimate of the number who died. And it’s a question bound to be raised when Le Sueur visits Rhodes College on Thursday, November 13th, at 6 p.m. His lecture, inside Blount Auditorium in Buckman Hall, will draw from his book Algeria Since 1989: Between Terror and Democracy.

Le Sueur’s visit continues this fall's “Communities in Conversation” series at Rhodes. For more information on his lecture, go here or contact Jonathan Judaken at judakenj@rhodes.edu. •