Mary Laura Philpott is a workaholic. That becomes abundantly clear as she reels off her long list of jobs. She’s an author, an editor, essayist, and she’s just published a new collection of essays, I Miss You When I Blink [Atria Books]. Philpott is making a stop in Memphis this Wednesday, April 17th, at Novel’s Lit and Libations event series to promote her new collection. Between book tour stops, she found a relatively quiet corner in the Atlanta airport to chat with me over the phone about her new book, penguins, and the joy of quitting.

Memphis Flyer: So, tell me about the new book.

Mary Laura Philpott: We’re calling it a memoir in essays. It’s an essay collection, but it reads like a memoir. It has that narrative arc to it.

And it’s your debut as a memoirist?

Yeah, we’re calling it a debut memoir even though I have another book. My last book, which was a book of cartoons, was totally different.

The Penguins with People Problems, right?

That’s right. I’ve actually gotten messages from people asking, “Are you the same person? Is that right?”

Okay, but let’s talk more about I Miss You When I Blink.

It started as a challenge to myself … about three or four years ago, I said to myself, “I wonder if I can make a collection of essays into a book and sell it.”

It’s come a long way from a challenge to yourself.

The scenes that come up again and again and again in these stories I’m telling — and some are from childhood, a lot are from early adulthood, and a lot are from this sort of midlife stage I’m in now — but the themes that come up again and again are reinvention, all the times I thought I knew who I was or what I was doing and then hit a wall and had to back up and take a turn and do things differently. And giving myself permission to change, which is a hard thing to do if you are a type-A person. Because you want to get things right, and you want to hang onto things until you perfect them. But sometimes the better choice is to let things go.

So, the theme was something that emerged, not something you outlined at the beginning?

Exactly I tried to do the thing where you outline a proposal, and you sell it, and they give you a pile of money and you just sit back and write the book. Did not work. I’ve learned about myself that I don’t really know what I’m writing until I’ve written it. I can’t even outline a single essay for you, because I generally don’t know what I think about something until I’ve written it. It was definitely a book that surprised me.

Do you find that writing helps you solidify or discover how you feel about things?

Totally. Joan Didion said, ‘I don’t know what I think until I write it down,’ and I’m very much the same way. … Even on a more micro level, there are essays that surprised me in the book. There’s one called “Wonder Woman,” and it is the essay that I meant to sit down and wrestle with, “Why am I such a perfectionist? Well, it’s probably my mom’s fault.” And as I wrote it, I couldn’t blame my mother. It wasn’t that I was being protective; it was that the more I took myself back in time to be a child, the more I was identifying with my mom then, as a parent myself, now.

I think there’s a flexibility you have to have. It’s wonderful to have an idea, but if you don’t allow the process to mold it in some way, you might miss something.

Totally. Well, as a reader, you can tell when you read an essay or a memoir, or even in fiction, you can tell when you read something and someone has just forced the thing they sat down to do, even when that was no longer the right thing to do with that piece. “I’m going to make this thing I set out to make.” You have to give your mind that flexibility and the project that flexibility to see where it goes.

So, this is the debut collection, you’ve published other essays elsewhere, and then there are the Penguins. And you’re the editor of MUSING as well. You really stay busy.

And I have a TV show on National Public Television. I have too many jobs. I’m a workaholic.

So tell me about the TV show.

It’s called A Word on Words. It airs on National Public Television, and you can also watch it online. It’s a reinvention of a show that aired for 40 years that was hosted by John Seigenthaler. When he passed away, NPT briefly decided to stop the show. … After a few years went by, they decided to reinvent it. … We make these mini shows, and they’re just interviews. And I have a co-host. J.T. Ellison is my co-host. She tapes half the episodes, and I tape half the episodes.

That sounds exciting. And National Public Television approached you about it?

So, you were just a natural fit. And you probably have a reputation, where they thought, “Well, she won’t say no to a job.”

She seems like a workaholic. She already has eight jobs; I bet she’d do a ninth one. In my book, there’s an essay called “The Joy of Quitting,” and it’s about how hard it was for me to accept that sometimes you do have to quit a job, rather than just saying yes and piling them on and piling them on. … That essay explores the feeling that something is not right and how quitting something that does not belong in your life, if you look at it the right way, is also sort of a successful move.

I am a former Memphis resident. There’s an essay in the book about how I moved around constantly as a child. And I was in Memphis from second grade through seventh grade, so I lived a pretty formative chunk of childhood there.

Mary Laura Philpott reads from her new memoir-in-essays I Miss You When I Blink, Wednesday, April 17th, at 6 p.m. at Novel. 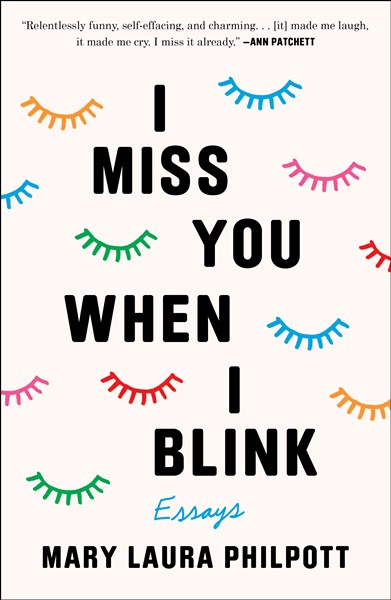 Mary Laura Philpott I Miss You When I Blink Novel