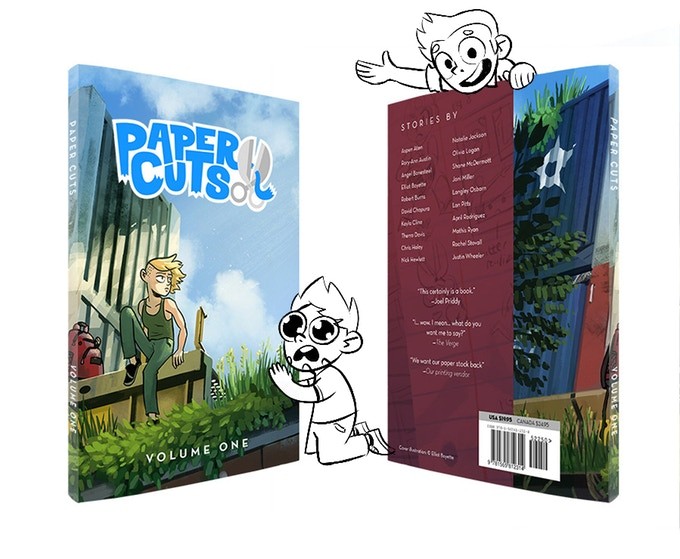 For the past three years, a group of Memphis-based artists and illustrators have been working away in semi-secret, hunched over sketch pads and digital illustration tablets, emailing each other ideas, and hogging the big table at Memphis Pizza Cafe when they met up to discuss their project in person.

Now, after three years of script-writing, character designs, and story-boarding, the creators of the Paper Cuts comics anthology have announced the project along with a crowdfunding campaign that runs until Thursday, July 4th.

Paper Cuts is a full-color, 170-page independent comics anthology inspired, in part, by the popular Flight comics anthology. The project, presided over by editor Shane McDermott and art director Elliot Boyette, was announced to the world via its Kickstarter campaign on Tuesday and is available exclusively via Kickstarter pledge. The goal is set at $12,800, and as of this writing, the campaign has garnered $1,816 in pledges.

“It wasn’t super organised at first because I’m not super organised,” says McDermott, a freelance graphic designer and former editorial illustrator for The Commercial Appeal and professor at Memphis College of Art (MCA). After making the move to freelancing, McDermott found himself thinking about a comics project he had kept on the back burner for what seemed like too long. So he started making calls, seeing who might be interested in contributing to an independent comics anthology. As both a former professor and student at MCA, it was only natural for McDermott to look to his former classmates and students to fill out the ranks of the anthology. “A lot of us met for pizza one night and started talking about it and formed our core group.

“Most of us are alums of the Memphis College of Art,” McDermott says before taking pains to stress that, while he might have taught some of the anthology’s contributors, when it came to Paper Cuts, they were peers and equals. “Since the school is closing, it’s really important to us that this book does succeed, because it’s a tribute to the school and to the program,” he adds.


“We debated on whether or not to have a theme early on, but we decided to just let everybody do what they want,” McDermott says of the eclectic collection. “If there’s any commonality between us, it’s that we’re all indie artists making our own thing,” adds Boyette, the anthology’s art director and a graphic designer for the city of Memphis.


That freedom allowed the artists to follow their passions — and has made for some seriously strange and exciting subject matter. Included in the anthology are stories about a nurturing velociraptor mom, space adventures, love stories, and a guy with T-rex heads for hands. McDermott’s entry is a side story from a larger work of his called Sea Horse. “It’s about this guy who gets stuck in the imaginative worlds he created as a child, but it’s sort of run down because he hasn’t been there in a while because he’s an adult,” McDermott says before describing his submission for Paper Cuts, a story that somehow manages to cleverly wrangle all my favorite genres into one comic. “[It’s] called ‘The Ghouls, the Bat, and the Ugly.’ It’s a haunted Western. It has zombies and a vampire and a wicked witch of the wild west getting into a shoot-out at the Black Lagoon Saloon.”

Boyette, a fan of both silly comic humor and post-apocalyptic scenarios, decided to marry the two seemingly disparate styles for his offering. “It’s about what happens when a calamity happens in the world and people band together in a run-down Hardee’s and make up a whole new cult religion,” he says. “It was true, pure fun making this comic.” Boyette didn’t actually set the story in a Hardee’s, though; he made up his own fast foot setting for his comic-book showdown: Nova Burger.

McDermott’s and Boyette’s graphic short stories will be in good company in Paper Cuts, alongside works by Rachel Stovall Davis, Nick Hewlett, Joni Miller, April Rodriguez, and a packed lineup of creative others. Fans of weird comics and out-there stories have until Independence Day 2019 to support this collection from independent artists.