Forgetting that stretch of time when Twilight and True Blood were in their heyday and vampire-themed anything sold faster than blood punch at a monster mash, there can be no better time to release a vampire novel than during a pandemic.


Vampires, in lore, have deep roots in plague. It’s no surprise that garlic, which boosts the immune system and can help cover the smell of sickness, wards off night-walking, bloodsucking fiends. And that whole blood thing, well, bodily fluids are certainly a vector for spreading disease. Which brings us to vampires’ oft-documented predilection for uninhibited sex with multiple partners, yet another way to spread disease.


So, after a manner of speaking, Grady Hendrix’s The Southern Book Club’s Guide to Slaying Vampires (Quirk Books) could hardly be better timed. Though, maybe the New York-based, South Carolina-born author would have preferred his novel to come out at a time when book clubs could actually meet.

Every vampire novel worth its holy water must pay homage to Bram Stoker’s Dracula, the brilliant epistolary novel that condensed the span of bloodsucker folklore into one tome. Hendrix’s The Southern Book Club’s Guide to Slaying Vampires does just that, while simultaneously making a case for itself as something notable in the horror genre.

Set in a nice neighborhood in a South Carolina suburb in the ’90s, The Southern Book Club’s Guide to Slaying Vampires isn’t a typical tale of Transylvanian terror. Hendrix’s protagonist is Patricia Campbell, a youngish housewife whose hardworking psychiatrist husband is logging extra hours at work in an attempt to climb the ladder. Her kids are beginning to enter difficult ages, and her mother-in-law lives with them. Her care falls mainly to Patricia, at least until Patricia hires a part-time caretaker, Mrs. Greene. Patricia’s world is focused largely on her family and her community. She’s got a mile-long to-do list and very little in the way of diversion. Except her book club.


They meet once a month to discuss grisly paperback true crime accounts. It’s a rare source of excitement for Patricia, who carries her family and is, for the most part, taken for granted by them. Then James Harris moves to town, and everything gets really interesting, really quickly. 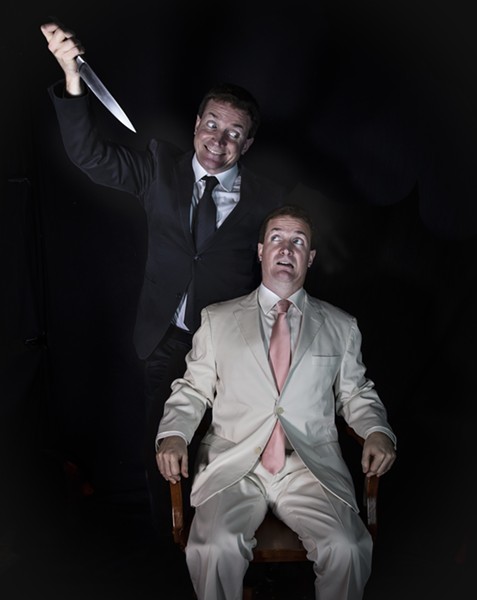 Hendrix’s new novel underlines the disenfranchised in society by giving them first contact with the Old Village’s vampire — and then making sure no one with any power believes their warnings. James Harris takes his victims primarily from the low-income, majority-African-American part of town, and every year, when a young black child disappears, it’s chalked up to parental neglect or drugs and then shrugged off by most of the town’s blissfully ignorant inhabitants.


Hendrix, author of My Best Friend’s Exorcism and Horrorstör, has a firm grasp on — and he deftly exploits — the narrow band of believable reality that most adults inhabit. When Miss Mary “mistakes” James Harris for Hoyte Pickens, it’s attributed to a lapse in an old woman’s memory. Similarly, the kids couldn’t have seen a man on the roof; they imagined it, spurred on by the wind, nightmares, a copy of Salem’s Lot open on the nightstand.

The best example of this, though, is the book club itself. When Patricia and her fellow members, housewives all, suggest that there may be something strange about the stranger in town, their concerns are waved off as the imaginings of flighty women, the result of a mixture of boredom and the lurid books they read. There is some genius in Hendrix’s setting in this. The novel takes place between the women’s lib movement and #MeToo, between the civil rights struggle and the era of Black Lives Matter. And so much inequality in the novel is glossed over by a combination of manners, mind-your-business mentality, and a studied refusal to acknowledge obvious problems. Most of the people in the novel believe that inequality has been erased; they know society works for everyone because it works for them. It’s an excellent setup for a horror novel, where the ability to see past the status quo can mean the difference between life and death.


But Patricia is a little unconventional. She’s as guilty as the next Old Villager of taking her privileges for granted, but she’s willing to challenge herself and she’s got heart. “A woman had died. She needed to take something by the house. Grace was right: it made no sense, but sometimes you did a thing because that was just what you did, not because it was sensible.”


Hendrix excels at producing horror novels with a surfeit of humor and heart. That’s not to say there’s not plenty of creepiness in the pages of The Southern Book Club’s Guide to Slaying Vampires, but there’s more to the novel than guts and gore and vampire lore. Hendrix’ new novel is sharp, clever and creepy in just the right ratio. All in all, The Southern Book Club’s Guide to Slaying Vampires is a delicious morsel for any fan of the genre to sink their fangs into.


More information about The Southern Book Club’s Guide to Slaying Vampires at gradyhendrix.com.