Phase II of Memphis’ and Shelby County’s Back to Business reopening plan is underway, but things are still anything but business as usual for many Memphians and Mid-Southerners.

In one step toward normalcy, though, both of the Bluff City’s biggest indie bookstores have, with a set of well-thought-out guidelines, opened their doors to customers this week. Burke’s Book Store and Novel are allowing in-store shopping (and continuing curbside pickup for those who prefer it) with adherence to guidelines posted on their respective social media pages. Burke’s even shared this thoughtful, rhyming image to help customers remember the rules. 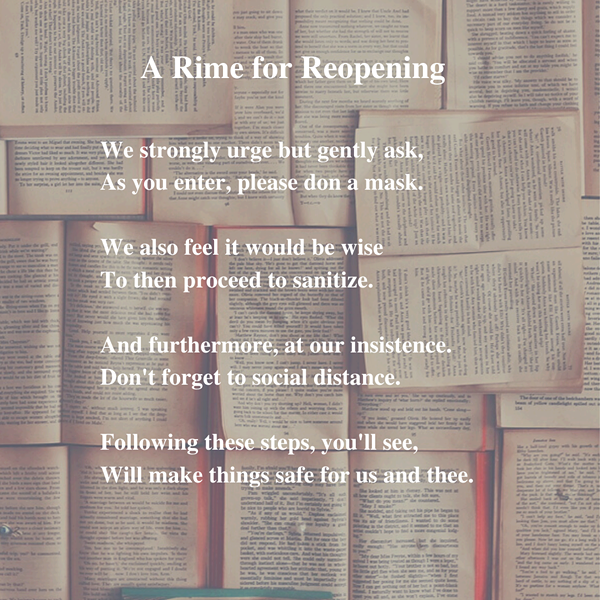 So for those still on the lookout for safe, socially distanced activities, here are a few more Memphis-centric books to help while away the homebound hours. There’s popular fiction, mystery, history, fantasy, and even a comic book series.

Eric Jerome Dickey
The Business of Lovers, 2020 (Fiction)
All things considered, maybe now is the perfect moment for a novel that takes human connection as its focus. “It’s a novel about family — the family you have and the family that you choose to have,” the author says. The Business of Lovers follows Brick Duquesne, fresh from a fight against cancer, an ailment he never revealed to his family. “It’s one of those things where people go through something but don’t know how to ask for help because they don’t want to disturb the lives of others,” Dickey explains. In a novel with former child stars, comedians, engineers, and a tangled web of relationships, Dickey’s characters search for agency and for ways to lift up the family they choose to love. Of course, as Dickey points out, perception is everything. “Anybody can smile and take a picture in front of a palm tree,” Dickey says. Of course, as the author points out, that photo can only hint at what’s going on beyond the edges of the frame.

Little Tea is set in Memphis in two time periods — the narrative alternates between the present day and the ’80s. Fullerton’s fourth novel — the follow-up to 2018’s successful Mourning Dove — follows the narrator Celia Wakefield and hinges primarily on her friend Thelonia Winfrey, known also as Little T. It’s a novel about disparities, social norms and mores, about the slow march toward equality, but more than anything else, it is a novel about the deep-rooted friendships that bind our lives. “We’re all just comparing notes on life,” Fullerton says of herself and her fellow storytellers, whether they work in ink and paper, film frames, or song. And with four novels and a career in radio under her belt, Fullerton can boast her share of experience with storytelling. She worked in radio in Memphis for nearly a decade, logging time at WEGR-Rock-103, FM 100, WMC-79, WEVL, and WSMS. And that was before she made the move to a bigger stage in California. In other words, it’s a safe bet that the Memphis-born author knows how to tease out a good tale. And, as in so many things, Fuller says a good story needs subtlety. “A writer can’t come out, laying the cards on the table, and say ‘This is the point,’” Fullerton explains. “You’ve got to leave that to the reader.” Fullerton will be hosting a virtual book talk in partnership with Novel bookstore on Thursday, June 18th, at 6 p.m.

Tony Max
The Golden Silence and The Crimson Hand (Comics)

From the mad mastermind behind Memfamous Comics and No Regrets tattoo artist Tony Max, comes the two-part comics series The Golden Silence and The Crimson Hand. The books are all set in the same reality, in a walled-in Memphis 200 years from now. It's a world steeped in the history of alternative comics and pulp fiction — with disgraced former cops, barbarians at the gates, and crumbling society. Max just put the finishing touches on the final issue of The Crimson Hand, making now the perfect time to get caught up on Memphis’ premier dystopian comic book. The series is available online for free at tapas.io/rabideyemovement.

Arthur Flowers
Another Good Loving Blues, 1993 (Fiction)
This novel takes Beale Street as its setting, telling the tale of bluesman Lucas Bodeen and Melvira Dupree, the conjure woman he loves. It’s a story of love in the time of Jim Crow, of happiness and connection and myth and history.