July 10, 2020
comment
Years ago, I worked on Beale Street, where I often had the chance to talk to tourists. It was a delight to talk to newcomers to the Bluff City, whether they were here to sample the blues and brews, the barbecue, to soak up the soul music history, study the civil rights, or if they were on a rock-and-roll pilgrimage. Sometimes, though, I’ll admit my enthusiasm for the full breadth of my hometown history would be stymied by a certain myopia in some tourists. They wouldn't want to leave Beale, or they’d be die-hard Sun fans who didn't see the point of checking out Stax — despite my cries of “It’s worth it for the Rufus Thomas connection alone!”

I would have loved to be able to direct those tourists to copies of Holly R. Whitfield’s Secret Memphis: A Guide to the Weird, Wonderful, and Obscure (Reedy Press). Unfortunately for me at the time, Whitfield had not yet written her fantastic ode to the hidden gems of the Bluff City. Every tourist to Memphis should be handed a copy of Secret Memphis upon entering the city. It should be required reading as well for any local eager to reacquaint themselves with the mythos of Memphis. 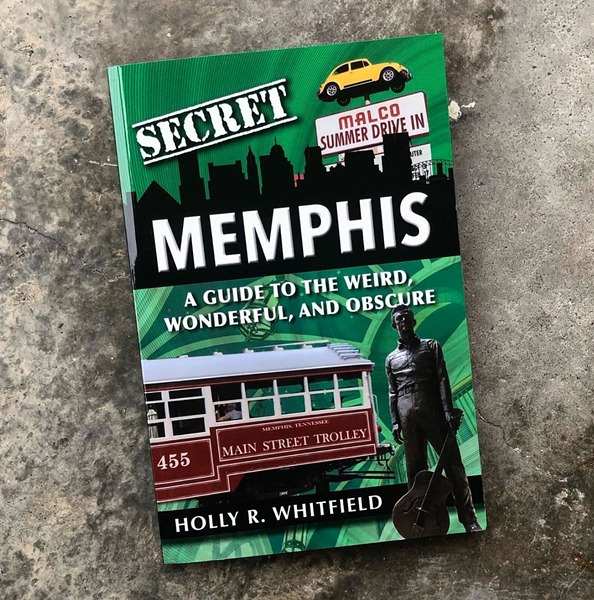 Whitfield’s selections are excellent — local treasures both recognizable and off the beaten path, all drawn from sites scattered across town. And it’s no surprise. As a writer for the I Love Memphis Blog since 2013, Whitfield has had occasions to get to know the ins and outs of her adopted city.

She moved here at age 18 to attend the University of Memphis, and she says her status as a transplant helped give her perspective and fuel her curiosity. “I explored it myself, both through the eyes of Memphians and through my own eyes,” Whitfield says. “I think that set the tone for my constant curiosity about the city and my ability to be inspired by Memphians. I mean continuously, every day.” She goes on, giving her response to readers who ask if she ever gets tired of covering Memphis: “I could write about it all day, every day, and I could never tell all the stories.”

Whitfield has only deepened her perspective through her work, and it shows in her debut book. “I do talk to locals all day long, but I also talk to visitors and tourists all day long for my day job,” she says. “I’m talking to people from other countries, and they love, love, love Memphis, and they love it for reasons that locals are tired of hearing about.” So with Secret Memphis, Whitfield sought to split the difference, exploring the city’s hidden gems and trying to give a deeper or different understanding of its more well-known treasures.

“I explored it myself, both through the eyes of Memphians and through my own eyes.” tweet this
Secret Memphis is something of a time capsule, as well. Whitfield strove to include up-to-date information on the town’s landmarks, such as the Johnny Cash statue in Cooper-Young and the Antenna marker on Madison Avenue — both brand-new when she was working on the book last year. “Those things were happening as I was writing,” she says. Another stop on the Secret Memphis itinerary, The Little Tea Shop, was honored with a documentary by Molly Wexler, which debuts tonight, July 10th, on WKNO-TV. Obviously, Whitfield has a clear grasp of the important historic and up-to-date sites in Memphis.

Whitfield’s book also celebrates the ethos of the Memphis hustle, the grit-n-grind spirit that seems so embedded in the city and its citizens. “It’s just sort of inherently a part of my understanding of the city and why I wanted to write a book like this to begin with,” she explains. From the entrepreneurial spirit of Royal Studios and Lucky Heart Cosmetics to the the DIY ethos of Altown Skate Park or the fabled Antenna alternative music club, the Memphis make-it-happen spirit is well represented. One of the author's favorite examples, she says, is the She Spoke Her Mind mural at the Cornelia Crenshaw Memorial Library on Vance.


“This is a woman who was a part of the sanitation workers strike,” Whitfield says of Cornelia Crenshaw. “But also she lived without utilities at her home for decades to protest what she thought was the unfair practices of MLGW. If we’re talking about people who are gritting and grinding, she’s one of them.” In Secret Memphis, Whitfield writes of Crenshaw, “It was she who, inspired by the words from her friend Robert Worsham’s poem, suggested the pointed yet simple slogan for [the Sanitation Workers’ Strike]: ‘I AM A MAN.’”

One of my personal favorite spots included in Secret Memphis is The Withers Collection & Museum, located at the quieter end of Beale Street. “People just don’t realize how important Memphians were to the civil rights movement,” Whitfield says, remarking on the wealth of photographs on display in the museum of photographer Ernest C. Withers’ work, from activist Fannie Lou Hamer proudly brandishing her voter registration card to a candid photo of Aretha Franklin holding hands with Sam Cooke. “You can go there and see it, and his family still manages the space. Whether it’s civil rights, Black sports history, [people have] seen these images their entire life but they didn’t know that they came from a Memphian.”

In the end, Secret Memphis ties together the sometimes seemingly disparate threads of Memphis history. After-hours bars, scenic trails, historic sites — it’s all one tapestry, one story, waiting to be celebrated and explored. And Whitfield’s Secret Memphis is a companionable and entertaining guide.