The third annual “Grammy GPS: A Roadmap for Today’s Music Biz” took place this past Saturday at the Stax Music Academy and Museum of American Soul Music. Sponsored by the Memphis chapter of the Recording Academy, the event featured a number of local and national influential music figures including hip-hop artist Talib Kweli, Grammy-winning engineers Andrew Scheps and Chris Finney, Grammy-winning producer Steve Jordan, and many more.

During panel discussions, the guests provided insight on music marketing, promoting in small markets, producing and engineering, exploring social consciousness through hip-hop, and other topics.

New Orleans-bred rapper, Fiend, spoke on two panels during the event. A true southern legend, he’s released a nice catalog of albums including There’s One In Every Family and Street Life on No Limit Records, Can I Burn 2 (my personal favorite), Go Hard or Go Home, among other solid installments.

In recent years, Fiend has adopted a mellow and soulful delivery that differs from his aggressive style in the ’90s and early into the new millennium. Although he owns his own label, Fiend Entertainment, he’s also signed to popular lyricist and fellow New Orleanean Curren$y’s imprint, Jet Life Recordings.

I got a chance to speak with Fiend about his experience at Grammy GPS, how he likes the Bluff City, his music history, where he likes to travel, and a handful of other things.

Follow Fiend on Twitter: @Fiend4daMoney
Check out his websites Fienddigital.com and Sleepybeartees.com
Download his latest mixtapes for free on datpiff.com or livemixtapes.com. Fiend plans to release a new mixtape mid-October.

Flyer: How was your experience at the event?

Fiend: It was dope. I met some cool ass people. I networked with people. I hung out with some people who share the same interests that I have. Good times. It was a hell of an experience. I can’t wait until the next one.

What’s one thing that you shared with attendees regarding the music industry?

Just stay focused and be patient, and let great things happen with your music. You’ve got to get out there and believe in you and promote and represent. And do it the best you can every chance you can. If not, nobody’s going to take you seriously. 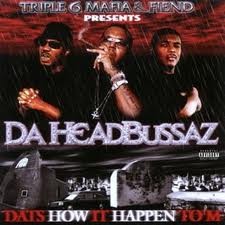 I love it out here. I don’t get a chance to come out here as much as I would like. When I do, I like to visit Select-O-Hits. From now on, I’ll be visiting Stax. I just like the city. Get me a spot at the Peabody and chill. Walk around the hotel. Enjoy beautiful girls, good smoke, good people.

Along with DJ Paul and Juicy J, you were in a collective known as Da HeadBussaz, which released the independent album Dats How It Happen To’M. How was that experience?

It was dope. It was cool. We hooked up and showed the world that fellas could hook up and make music with no conflict — make great music without no problems or no negativity.

Are you a fan of any Memphis artists, past and present?

What’s one of the most important things that you’ve done to stay relevant?

The thing is, you gotta stay at it. That’s the most important thing that I can say.

You released your first album on independent label Big Boy records in 1995. Were you around during the label’s rivalry with Cash Money Records?

Yeah, I was but it never affected me. It was all in the love of hip-hop. Cats sometimes don’t see eye—to-eye, so they take it to music and stuff like that. It’s all good. I was there. I was very instrumental in a lot of big things over there. That was a nice run. Me, Mystikal, Partners-N-Crime, Ghetto Twinz, G-Slim, Sporty T, we had a lot of people over there.

Transitioning from there, how’d you link up with Master P?

I was making music, making noise. We had people who knew each other, and they were saying, you guys could be working together. I ended up getting with them boys and we ended up working out something. I ended up having one of the biggest songs on the [“I’m Bout It”] soundtrack. “I’m Bout It” ended up being one of the biggest [independent] movies. After that, I got a chance to be involved with all kind of shit. Over 80 million records sold, I can say that I very much played a serious part of that.

Did you have a personal relationship with C-Murder, Mac or the late Soulja Slim?

All those are my homies. Me, C-murder and Mac, we hung out real, real tight. They’re both incarcerated right now. Soulja Slim is deceased. I’m just pushing. I want to be able to do more with my life so I can help out my homies one day.

[Fiend ended up leaving No Limit and starting his own independent label, Fiend Entertainment. From there, he would link up with one of the most successful rap labels ever, Ruff Ryders Records, home to DMX, the Lox, and Eve.]

How did you end up getting with Ruff Ryders?

DMX was getting ready to depart the label, so they were like ‘We want somebody who will be just as dope or that could shake up the world with that same attitude or that same aggression.’ They heard some of my music. We sat down and met, and we really dug each other’s movements. I was already kind of doing my thing, and them cats were already doing their thing. It was an honor to bring that legacy further than where it had already gotten to. And then being a southern boy who got with them, it was even more dope.

I understand that you’re known as International Jones, because you enjoy traveling. Where are some of your favorite places to visit?

Some of my favorite places have to be London; Mulan, Italy; Paris of course; Lahonce, France; Seattle is dope, I mean Seattle is awesome. I like LA. Atlanta. And I just found a little place called Sarasota, Florida. That shit is awesome. Another place is Canada! Montreal, Victoria, and Vancouver Canada. It’s a lot of dope places. I’m a water man too. I don’t mind traveling by water. I rent a yacht maybe once a month just for me. I really like being on the water. It’s just relaxing. It’s tranquil.

There’s an artist on your album, Can I Burn 2, named J-Boy. I really liked his flow. On the album, you mentioned that he would be releasing his own album soon, but I never heard anymore from him. What happened to him?

He was murdered. He ended up getting away from me and doing his own thing. He got into some other things, and people got envious of him. They saw a well-off, young dude doing his thing. I don’t really know what else he was into, but from what I heard he got set up and they killed him trying to rob him. (Takes a moment of silence and utters ‘Rest in Paradise J-Boy’)

Your music has changed. It was more rowdy earlier on but now it’s more smooth and relaxing. What brought the change?

It’s whatever the beats call for. I’m just an instrument. I vibe off the track. It’s wherever the track pulls me. I fit the music. I still make it all. That International Jones shit is just me man …traveling, women, fast cars, just chlling, just having fun.

You were invited to Dr. Dre’s house to work on his Detox album? How did that pan out?

We got word that he was interested and he reached out, but [there was a conflict of schedules and] it just didn’t work out. I haven’t worked with him before, but I’ve been making joints, so hopefully one day he’ll call me and tell me, ‘C’mon man.’

You’re also a producer and have produced for Jadakiss, Lil' Wayne, and others. Do you like producing more than rapping?

I love producing. I love rapping. I just love making music. I do love producing, but I’ve kinda took a break to focus on one more than the other.

How has it been working with Curren$y and being signed to Jet Life Recordings?

That’s the homie. It’s all good. I fucks with him. We out here living this Jet Life. Iron Gang shit. We chilling, making good music, traveling, making alternative tunes for people to chill to, because it’s so much around them that’s going on.

What’s up next for Fiend?

I got a few things coming. A book, some movies, I’m not just putting all my ducks in a row. But more entertainment, real life, partying, and just showing cats this cool shit. I want to help cats get some money. Just hold tight, it’s gonna be real nice. Well worth the wait.