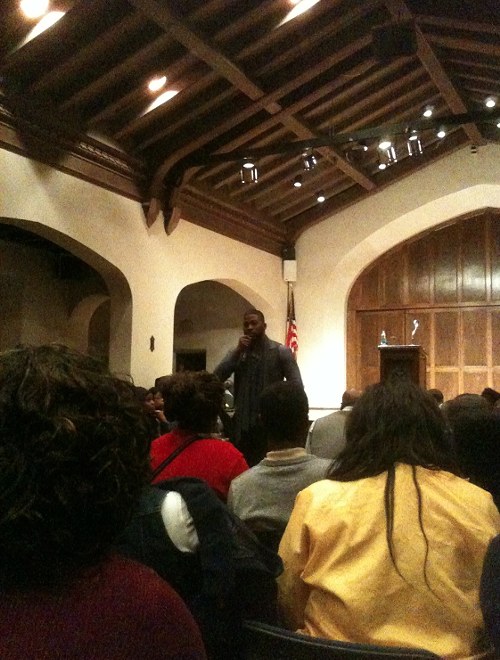 On the last night of Black History Month, more than 100 students and city residents gathered in the Hardie Auditorium at Rhodes College to hear world-renowned artist, producer, and actor David Banner share his thoughts on the state of hip-hop.

As I stepped into the room, I noticed a variety of ages and races in attendance. We all waited patiently for Banner to arrive. I've seen several videos of him lecturing online, so I was excited to hear what he had to say.

Banner received a standing ovation when he walked into the room clad in dark slacks, a button-up shirt, scarf, and dress shoes — a contrast to the apparel he wore during the days he released such hits as “Like a Pimp” featuring Lil’ Flip, “Play,” and “Get like Me” featuring Chris Brown and Yung Joc.

“Don’t believe anything that I say. Just don’t dispute it,” Banner said after introducing himself to the audience. “Go research it first.”

For nearly an hour, Banner touched on hip-hop, its correlation to slavery, and how it has and continues to affect society — primarily the African-American community. He alluded to how blacks have gone "from whips and chains" during slavery to "chains and whips" (slang for necklaces and cars) being one of the primary messages that the race conveys in hip-hop music.

I thought about the statement for a second and concurred. Today's rap music is largely infested with materialism.

Banner said hip-hop in its current form could be compared to an American plantation. He broke it down to three sections: the house slave, yard slave, and field slave. In other words, the house slave is the artist who has obtained super-stardom. The yard slave is someone that has achieved some commercial success, but is pushing for the same prosperity as the house slave. And the field slave is more so the independent artist that’s working to maintain relevance and their own form of success.

“The plantation owner is the record label,” Banner explained. “When you get a record deal, [a lot of people] think that’s the biggest thing in the world. If you get $200,000, and you’re not used to making $100 a week, that’s the world. ... I had ‘Stuntin is a habit,' [the chorus for hit song 'Get Like Me']. I was number one in the world. I had millions. But I didn’t feel right. I couldn’t sleep right. My friends were saying, ‘You got a Bentley. All these movie star girls want to be with you. What’s wrong?’”

During the lecture, Banner also opened up about his recent absence from releasing music, which he attributed to him thinking he was part of the reason why so many African Americans fell victim to the street life, materialism, avoided receiving a decent education, among other issues.

“Hip-hop was supposed to be a reflection of the streets, [but] hip-hop [today] doesn’t touch on real situations… things that are really taking place in the streets,” he expressed passionately. “The one thing that I do like about hip-Hop is it brings every race of people together.”

Other things Banner touched during the lecture was how many Caucasians have become more comfortable with using the “N-word” in today’s society versus a decade ago, how youth know more than their parents suspect, the idolization of entertainers versus successful people in other professions, and how it’s become cool to encourage drug usage.

He also expressed his thoughts on how people such as Martin Luther King, Jr., Malcolm X, Pimp C (who allegedly died from respiratory depression due to an overdose of promethazine and codeine, but is rumored to have possibly been poisoned), and Medgar Evers, lost their lives because they were trying to improve the conditions and knowledge of not just African-Americans, but the oppressed and underprivileged population as a whole (he mentioned famous electrical inventor Nikola Tesla as well).

Shortly before ending his lecture and taking questions from the audience, Banner asked everyone to close their eyes before inquiring, “How do you really feel about black people?”

After hearing him speak, I felt so enlightened and encouraged. It's amazing how one person can have a positive impact on so many people. I hope to have the opportunity to hear him speak again in the near future. Maybe even have a personal chat with him and receive some helpful advice on life. Only time will tell.

For readers who aren't too familiar with David Banner, here's a little history:

Banner has released six solo albums, as well as a collaborative effort with producer 9th Wonder titled Death of a Pop Star. Outside of rap, he scored the lead dance sequence of the 2011 remake of Footloose. He wrote, produced and arranged the song for Gatorade's 2010 "Gatorade Has Evolved" TV ad campaign, the 2011 Mercedes tribute single, "Benz" which also featured U.K. singers Estelle and Daley, and much more.

He’s also starred in movies such as Black Snake Moan, Stomp the Yard 2, Days of Wrath, and The Experiment.

In November 2006, Banner was awarded a Visionary Award by the National Black Caucus of the State Legislature in recognition of his charity work following Hurricane Katrina. In September 2007, he testified before Congress at a hearing about racism and misogyny in hip-hop music titled "From Imus to Industry: The Business of Stereotypes and Degrading Images." He defended his use of offensive language.

Banner recently received a key to his native city Jackson, Mississippi. He’s currently planning the release of his first film.