Reaching the Finish Line: My Reflections on the Boston Marathon Bombings 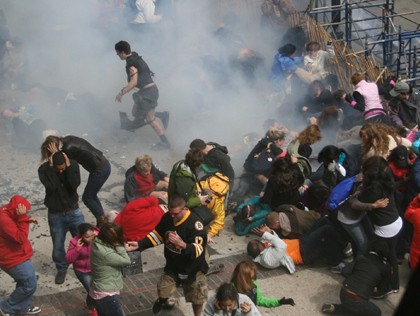 Imagine nearing the finish line of a marathon after running 26.2 miles. Your heart is pumping. Your adrenaline is rushing. You're flooded with euphoria and determined to make it to the end no matter what.

Just as you’re about to complete your journey, the impact from a sporadic explosion knocks you off your feet. Another one follows seconds after, knocking limbs from your body and leaving you covered in massive amounts of blood. The pain that you're experiencing is indescribable.

By placing your feet in these shoes, you're becoming one of many who participated in the world-renowned Boston Marathon on April 15th.

More than 260 people were injured from the explosions that took place in Boston's Copley Square just before 3 p.m. The bombings, which occurred within 12 seconds of each other, also left three people dead: 8-year-old Martin Richard, 23-year-old Boston University graduate student Lingzi Lu, and 29-year-old Krystle Campbell.

I was at the Memphis Flyer headquarters working on some assignments when a co-worker asked me if I had heard about the explosion. I was dumbfounded. I didn’t know what he was talking about. However, I didn’t anticipate it to be as horrid as it was once I looked it up online.

Over the last year, I’ve began to participate in 5k runs for recreation but nothing remotely close to a marathon—not even a half-marathon. But I do know that I enjoy running. It’s an outlet for me to clear my mind and release any frustrations. Plus it’s good cardiovascular exercise.

Out of all things, it's not something that I associate with life-threatening injury or death. But since the bombings on April 15th, it's safe to presume that those will be things that come up when running competitions are mentioned moving forward. 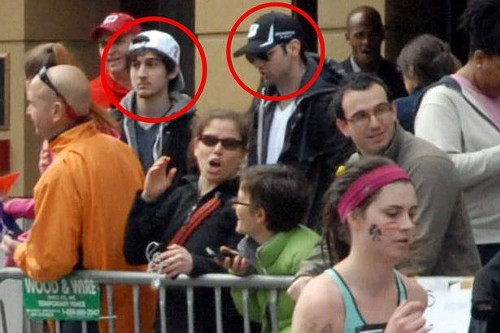 The two men responsible for the bombings, bloodshed, and heartache during the 117th annual Boston Marathon are 19-year-old Dzhokhar Tsarnaev, and his brother, 26-year-old Tamerlan Tsarnaev (who was identified as the brains behind the attacks and also a supporter of radical Islam). The two brothers are Muslim and ethnic Chechens from Russia. They had been living in the U.S. for a decade at the time of the bombings.

Surveillance cameras revealed that each brother wore a dark backpack, which held bombs composed of kitchen pressure cookers packed with shrapnel, on the day of the bombings. The backacks were placed on the ground near the marathon's finish line. They used a remote control device to detonate the two bombs inside of them.

But the bloodshed didn't stop there.

The brothers shot 26-year-old Sean Collier, a Massachusetts Institute of Technology campus officer, multiple times to possibly rob him for his gun in hope of expanding their arsenal. Shortly after that, they car-jacked a man for his Mercedes Benz SUV.

While steering the stolen SUV through Watertown, Massachusetts, about 20 minutes away from Boston, the two began to notice that they were being followed by city police and engaged in a gunfight with the officers.

Tamerlan was killed during the shootout, which took place early Friday, April 19th, while Dzhokhar managed to escape with multiple gunshot wounds. He was later found bleeding inside of a boat in the backyard of Watertown resident, David Henneberry.

When police apprehended Dzhokhar, he was in critical condition with gunshot wounds to the head, neck, legs, and hand, and he had suffered massive blood loss, according to an F.B.I. affidavit.

Despite the injuries documented in the affidavit, reports show he’s also suffering from a gunshot wound to the throat, which may be self-inflicted. As of today, he's said to be in fair condition at Boston's Beth Israel Deaconess Medical Center. 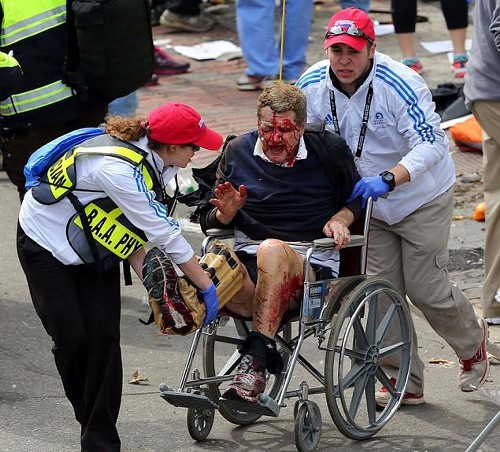 Witnessing the coverage on the event over the last week—the memorials, the articles, the blogs, the news coverage, and even from doing my own research to write this post—it's really sunk in how unfortunate the entire occurrence is. Those people in attendance at the Boston Marathon that day weren’t expecting to lose limbs, hearing, or even their life. They were there to run for a good cause.

On the contrary, because of the occurrence, a husband and father (Tamerlan) is now dead, leaving behind his widow to raise their daughter alone. And a University of Massachusetts Dartmouth college student (Dzhokar) will possibly never live life again as a free man. In no means am I justifying what they did or sympathetic for them. I just feel that this situation is unfortunate for EVERYONE involved.

The Boston Marathon bombings are yet another occurrence that conveys how extremely significant it is for us to cherish every day we’re alive and be appreciative for everything within our lives. Any one of us could take our last breaths in a matter of seconds.

Only God knows if a life-changing tragedy will occur, and more so, when it’s our time to leave earth. My prayers and condolences go out to all those affected by the Boston Marathon bombings. I understand there’s no restart button for us to push, to go back in time, and do things differently. I just hope that all of the survivors can push forward as strong and positively as possible. I could never place myself in your shoes. However, I do want you to know that you’re not the only ones hurting from this catastrophic event. People across the globe—family, friends and concerned citizens—are feeling the effects of this devastating mishap as well.

Stating that, I hope everyone takes something from this unfortunate occurrence, which will inevitably become another piece of history. If nothing else, it reminds us that we can’t take life for granted. It may sound cliché, but it’s true. Just ask those who were in attendance during the Boston Marathon.

Massachusetts Governor Deval Patrick and Boston Mayor Menino, launched One Fund Boston, a way to support those affected by the Boston Marathon bombings. The fund has currently raised more than $23 million.