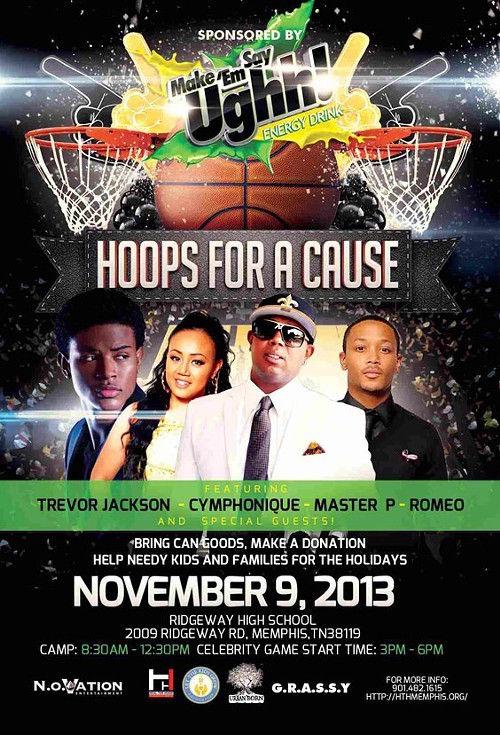 This Saturday, Heal the Hood Foundation of Memphis is holding its second annual celebrity basketball game. The organization will use the event to highlight the city's youth gun violence issue and raise funds to help combat it.

The "Hoops For A Cause Celebrity Basketball Game" will take place November 9th in Ridgeway High School's gymnasium. It will feature the likes of rap artists Master P. and Romeo, teen actress and singer Cymphonique Miller, Atlantic Records R&B crooner and Disney star Trevor Jackson, former University of Memphis basketball players, and many more. It's scheduled to start at 3 p.m.

Prior to the basketball game, around 400 kids between the ages of eight and 16 years old will participate in the "Let the Kids Grow Basketball Camp." The camp will last from 8:30 a.m. to 12:30 p.m.

Representatives from Memphis Gun Down and the Gang Reduction Assistance for Saving Society's Youth (G.R.A.S.S.Y) program will be in attendance to speak with youth about gang and gun violence, and encourage them to keep their life on the right track.

In a report released by 24/7 Wall Street, a financial news and commentary website, Memphis was named the fifth most dangerous city in America. The information was compiled from Federal Bureau of Investigation data.

“The thing that keeps getting overlooked and doesn’t get the funding, is the violence in the city of Memphis,” said LaDell Beamon, founder of Heal the Hood. “With 'Hoops for a Cause,' we’re raising money to deal with the situations that constantly keep plaguing these young people. We look at that as a cancer in itself. It’s kind of like a social cancer, because that’s the reason why so many kids are killing each other, bringing guns to school, and it’s so much violence.”

Around 2:30 p.m., there will be a pre-show featuring R&B artist Iyse Gibson and rapper Lil Kaotik. This will be followed by the celebrity basketball. T-Magic the magician will also be on hand to entertain kids during the event. A half-time performance will be provided by Jackson.

Beamon said Heal the Hood will utilize funds raised from the event to launch a community hub for youth, which will offer them a variety of resources and extracurricular activities to access. The hub will be located inside of Lanier Middle School and be open to youth ages 10 to 15 years old.

Beamon thinks by providing inner-city youth with more positive outlets, the presence of gun violence will be reduced.

“Kids from the Whitehaven Community, and surrounding schools, [will] actually [be able to] come inside the school on after-school hours and take up classes anywhere from comic book design to learning audio engineering, recording, dance, martial arts, the whole nine yards," Beamon said. "We’re recruiting for it now. The grand opening will be after Thanksgiving.”

Beamon said Heal the Hood aspires to open up a store inside of the community hub, which will sell reasonably-priced shoes and clothing. Older-aged teens will be provided employment at the store.

For more information on Heal the Hood or the "Hoops For A Cause" event, visit hthmemphis.org.