First Tennessee Doubling Donations Made To The Salvation Army 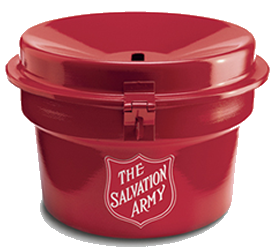 The season has arrived once again when the sounds of bells fill the air outside local retailers. That means the Salvation Army’s annual Red Kettle campaign is underway.

Donations to the Red Kettle campaign helps feed the hungry and provides toys for kids and clothing for the homeless. Some funds also go toward the Salvation Army's social service programs.

But this year, the campaign hasn't been able to raise as much money as it normally does. The organization aspires to raise more than $500,000 this season. However, it's only reached the halfway mark of the goal thus far.

The First Tennessee Foundation has signed on to help the Salvation Army accomplish its goal. On Tuesday, December 17th, the Foundation will match every dollar that a person donates—up to $25,000—to one of the various Red Kettles across the city.

Kettles are set up outside Kroger stores, Walmart stores, the Wolfchase Galleria, and other establishments. People can also make a $10 gift by texting MEMPHIS to 80888, or they can give by phone when they dial 1-800-SAL-ARMY.

A donation of $25 provides a child with clothing and school supplies; $50 helps feed a hungry child for an entire week; $75 helps heat a family’s home during the winter; and $100 helps shelter a homeless family for five days.

The Salvation Army began its Red Kettle campaign in 1891. To find more information on how to donate to a Red Kettle or to host your own online Red Kettle, visit salvationarmymemphis.org.