A day after his team lost to the Memphis Grizzlies, Brooklyn Nets head coach Lionel Hollins touched on his battle with hypertension during a Healthy Shelby luncheon Wednesday.

A spokesman for the program’s "140/90: Living Life Under Pressure," a hypertension awareness campaign, Hollins revealed to a crowd seated inside of the Holiday Inn-University of Memphis that his struggle with blood pressure began as a NBA player.

“I think I was 29 years old, still playing, still in great shape, and the doctor says, ‘You have high blood pressure.’ I actually went a couple years before I did something about it,” Hollins said. “I retired [from the NBA] and went back to Arizona. I’m working, and I get a doctor who says, ‘This is how you need to deal with [hypertension].’ From that point on, I’ve been active in dealing with it. I try to stay active physically [and] eat the right things. You have eating habits that you get away with when you’re real active, but when you’re not playing, [it’s different]. I haven’t had a soda in about eight years. And I love soda. I can’t remember the last time I’ve had McDonalds, Wendy’s or any [type of] fast food.”

The gathering Wednesday particularly targeted young African-Americans in their 20s and 30s. Through its hypertension awareness campaign, Healthy Shelby seeks to heighten this age group's awareness of high blood pressure and how making certain lifestyle changes now can impact their future significantly.

According to the American Heart Association, about 80 million U.S. adults have high blood pressure. However, many are unaware because they're typically no symptoms to the chronic disease. But untreated high blood pressure could lead to heart disease, congestive heart failure, kidney damage, strokes, and a multitude of other health issues.

In Shelby County, 37 percent (around 240,000) of residents have high blood pressure, according to the Common Table Health Alliance.

African-Americans reportedly develop high blood pressure at younger ages than other race groups in the nation. And they're more likely to develop complications associated with the chronic disease. 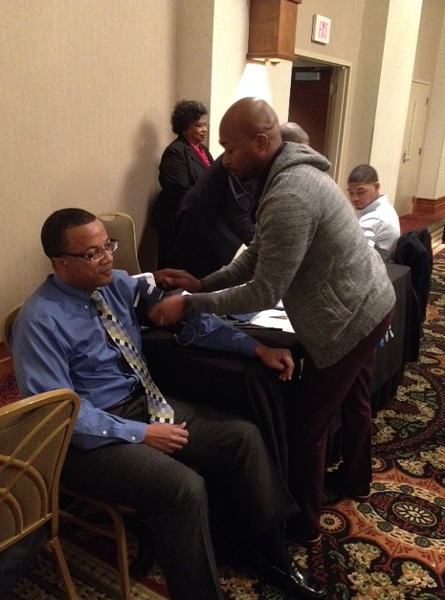 Although high blood pressure is hereditary for some, its impact can be controlled by consuming a healthy diet, reducing salt intake, maintaining a healthy weight, managing stress, and complying with medical prescriptions.

“I think it’s imperative that the younger population learns good health practices in the way of diet and exercise,” said Adrian Newson, assistant administrator of clinical services at Baptist Memorial Hospital. “If you don’t invest in your health and exercise and try to do those things that will curtail your risk factors, you can almost predict what your outcome will be. The things you can control, you work toward controlling: dietary, exercise, and decreasing your stress factors where you can. But genetics is genetics. You may delay it, but you really have very minimal control relative to altering those things that get passed on in genetics.”

At the luncheon, people were able to get their blood pressure checked, enjoy a healthy meal, and take home a mini cookbook with healthy recipes. WMC Action News 5's Janeen Gordon moderated the conversation with Hollins.

Former coach for the Grizzlies, Hollins said it was important for players to become more cognizant of their health because failing to do so could increase the likelihood of them traveling down a similar path as him and millions of others in the nation.

Hollins said motivating Grizzlies players to spread more awareness of hypertension to youth in the community could lessen the amount of people impacted by the condition looking forward.

"I think [Healthy Shelby] needs to reach out to the Grizzlies, and get their players understanding that even though their healthy now, they’re going to get older and not do what they’re doing now," Hollins said. "My eating habits as a player, I never even thought about them. I ate too much and ate the wrong things. And now that I’m not active anymore on that level, I think [eating healthier is] important. They’re great role models, such a huge part of the community. When they go talk to the community, the young kids want to hear what they have to say."