Going Off the Grid and Lunching with Big Horn Sheep

"Going off the grid" is an expression I first heard from a young friend a few years ago and have since seen and heard hundreds of times. But until last week I had not gone off the grid for more than a couple of days.

It helps to be in western Montana, a place where, it is said, 20-somethings go to retire and, it should be added, parents go to mooch off them.

Thank you, smartphones and iPads. If you don't have one, going off the grid has never been easier. My hosts had no televisions, no wireless, no land lines, and no newspapers. But they did have pickup trucks, a small boat, and a lot of know-how about the Hiawatha Trail, Wild Horse Island, Flathead Lake, and the mountain ranges around Missoula. More than fair trade.

I got through an Anne Tyler novel in three sittings, spent less than three minutes thinking about the unified school district, drank four huckleberry milk shakes, and ate three pounds of black cherries. Puttered around Flathead Lake, the biggest freshwater lake in the West, on a fishing boat. Saw a forest fire close up and watched planes skim the lake to scoop water to dump on the fires.

And ate lunch near a curious herd of big horn sheep on mostly uninhabited Wild Horse Island in Flathead Lake. My son, an avid hunter, is going to hike several miles in rugged back country next month, risking life and limb for a chance to get a shot at a ram. On Wild Horse Island we hiked within 100 yards of three of them.

The Hiawatha trailclaims to be the most scenic rails-to-trails bike route in America and the 15-mile trail starts with a 1.7 mile tunnel, made more exciting by an inadequate headlight and an unfamiliar rental bike and water dripping off the walls in the pitch blackness. I was lucky to catch up to a straggler in another group with a better light. 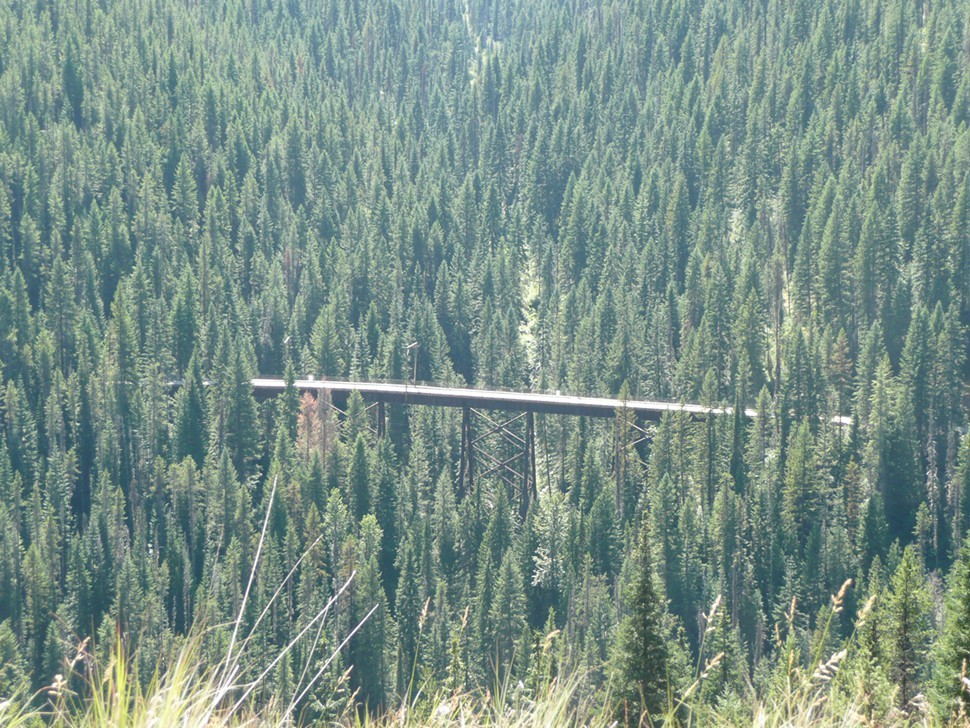 The trestles over the creeks were built by the Milwaukee Road railroad, employing the same high-grade engineering of the Harahan Bridge across the Mississippi. Definitely a "wow" factor in high bridges.

The Great Rivers and Underground Railroad trails go through Mississippi and Middle Tennessee; The Southern Tier goes through Mississippi and Alabama; and the TransAmerica Trail goes through Kentucky. But Memphis is not on the North American biking map of transcontinental trails, at least as far as Adventure Cycling is concerned, or at least not yet. The Harahan Project could change that.

As Matthew Frank wrote in Montana Headwall magazine, "cyclists hate the interstate as much as headwinds and hemorrhoids" but in some rural state like Montana and North Dakota that's all there is. For the first time in its history, Adventure Cycling rerouted major sections of the Northern Tier and Lewis & Clark routes from state highways to Interstate 94 because of the oil boom that has drawn a steady stream of trucks to western North Dakota and eastern Montana.

Interstate cycling, legal but discouraged in several states, can be dangerous. A cyclist in West Memphis was killed in an accident earlier this month on Interstate 55 three miles from the river. In Missoula, I ran into a grizzled cyclist making his way from North Dakota to Santa Cruz, California on a bike that looked like it had been salvaged from a junkyard and loaded with bags carefully balanced from the handlebars.

He had stopped in Missoula to have his picture taken at Adventure Cycling, adding to the hundreds of snapshots posted on the wall. But his was not a particularly happy tale. He had been deliberately forced off the shoulder by cars and trucks, shouted at, and worn down by the heat so much that he hitched a ride, bike and all, on a flatbed truck and hopped a freight car on another leg.

"I couldn't stand the heat so I got off 40 miles outside of town," he said.