"Taps" For a Memphian Awarded the Medal of Honor

Now there are ten of them.

Vernon McGarity, a Memphian who was one of the last living Medal of Honor recipients from World War II for his heroic actions during the Battle of the Bulge, died last week. He was 91 years old.

"Extraordinary bravery", "extreme devotion to duty", "intrepid leader of men", and "gallant soldier" are some of the phrases in Mr. McGarity's citation.

Funeral services were held Saturday, two days before Memorial Day. At the time of his death, Mr. McGarity was one of 80 living recipients of the Medal of Honor, the U.S. military's highest decoration for valor. There are now only ten living Medal of Honor recipients from World War II.

"He never asked to be a hero but he handled it well," said the brief obituary notice. Mr. McGarity was eulogized by his son, Ray McGarity, as a humble man who never tried to capitalize on his honors although he knew Tennessee politicians from Memphis Mayor Henry Loeb to Governor Ned McWherter.

Mr. McGarity was born near Savannah, Tennessee and joined the Army on his 21st birthday. He shipped overseas in 1944 and in December of that year he and his squad of ten men were ordered to "hold out at all costs" against the German counter-offensive. They continued to do that for two days, as Mr. McGarity rescued comrades, routed German machine-gun nests, destroyed tanks, and risked his life to gather a hidden stash of ammunition. They fought, literally, to the last bullet before Mr. McGarity was captured. He spent six months in a prisoner-of-war camp before being liberated.

Mr. McGarity served in the Tennessee National Guard for 28 years and worked with veterans for many years in Memphis and Jackson, Tennesse. The Harrison McGarity Bridge over the Tennessee River in Savannah is named for him.

Ray McGarity is well known to Memphis tennis players as "Big Ray," a gentle giant who was an excellent player, teacher, and undoubtedly the biggest and strongest man ever to play the game at such a high level in his tournament days. He could probably drive a ball right through you, cartoon-like, were it not for his sportsmanship and soft-spoken disposition.

"Daddy was quiet and strong," he said in his eulogy. "A father's love never dies, nor does a family and son's love for him." 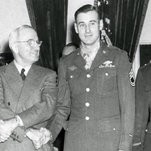 Mr. McGarity received his Medal of Honor from President Harry Truman on October 15, 1945.

"I'd rather have that blue ribbon with the Medal of Honor on it than be President of the United States," Truman told him.

Here is the citation from the Medal of Honor Society's website:

He was painfully wounded in an artillery barrage that preceded the powerful counteroffensive launched by the Germans near Krinkelt, Belgium, on the morning of 16 December 1944. He made his way to an aid station, received treatment, and then refused to be evacuated, choosing to return to his hard-pressed men instead.

The fury of the enemy's great Western Front offensive swirled about the position held by T/Sgt. McGarity's small force, but so tenaciously did these men fight on orders to stand firm at all costs that they could not be dislodged despite murderous enemy fire and the breakdown of their communications. During the day the heroic squad leader rescued one of his friends who had been wounded in a forward position, and throughout the night he exhorted his comrades to repulse the enemy's attempts at infiltration.

When morning came and the Germans attacked with tanks and infantry, he braved heavy fire to run to an advantageous position where he immobilized the enemy's lead tank with a round from a rocket launcher. Fire from his squad drove the attacking infantrymen back, and three supporting tanks withdrew. He rescued, under heavy fire, another wounded American, and then directed devastating fire on a light cannon which had been brought up by the hostile troops to clear resistance from the area. When ammunition began to run low, T/Sgt. McGarity, remembering an old ammunition hole about 100 yards distant in the general direction of the enemy, braved a concentration of hostile fire to replenish his unit's supply.

By circuitous route the enemy managed to emplace a machinegun to the rear and flank of the squad's position, cutting off the only escape route. Unhesitatingly, the gallant soldier took it upon himself to destroy this menace single-handedly. He left cover, and while under steady fire from the enemy, killed or wounded all the hostile gunners with deadly accurate rifle fire and prevented all attempts to reman the gun. Only when the squad's last round had been fired was the enemy able to advance and capture the intrepid leader and his men.

The extraordinary bravery and extreme devotion to duty of T/Sgt. McGarity supported a remarkable delaying action which provided the time necessary for assembling reserves and forming a line against which the German striking power was shattered.