Facing Down a Mountain Lion 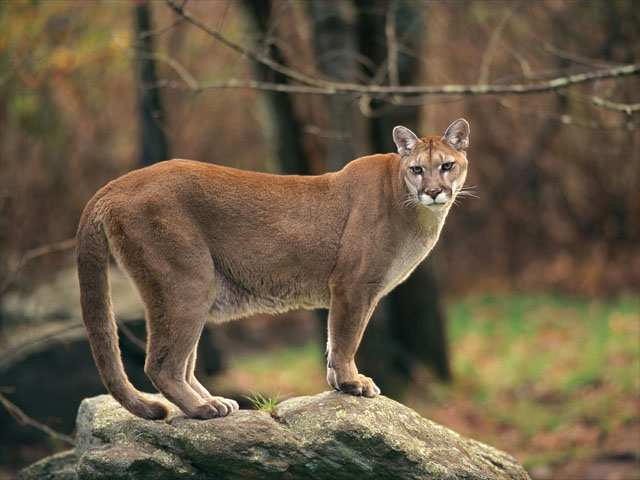 The written correspondence from my daughter in Montana is infrequent but it sure is interesting.

To summarize: went camping, went for solo hike, packed bear spray, encountered mountain lion, lived to write the tale. Oh, you and Mom might want to hold off reading this because it might spoil your visit out here.

Katy takes seriously the "Outside" magazine motto "live bravely." I live cautiously, hike on well-worn trails, and like my recreational activities on lined courts and playing fields. That is not the Montana way.

Two weeks ago, Katy, 26 years old and a three-year Montana resident, went for a hike to the top of the Hogback Ridge Trail in remote western Montana.

"I looked for signs of wildlife but only saw what looked like deer, elk, and moose droppings. I had taken my bear spray out of my backpack and tucked it into an outer pocket for easy access. Mountain lions had not even crossed my mind as a real threat even though I had an encounter with one in the Cabinet Mountains a year ago.

"Once the trail became more forested I began shouting and clapping regularly, once or twice a minute to ward off potential threats. I wasn't feeling scared or in danger, just taking standard precautions to avoid an unwanted encounter. I hoped to see a moose or maybe a bear from a safe distance, like on the hill across the ravine. When the trail got steeper and my breathing picked up I still made sure to make whooping noises and 'hey bear' calls. I told myself not to fall into a sense of security just because I was almost to the top of the ridge. Bears can go high, too.

"At the ridgeline I stopped for about ten seconds to take in the view and spotted a large rockslide on the mountain to my right and more forest to my left. Eager for a better view, I kept walking. That's when I saw it — a mountain lion nestled in the rocks about 25 yards in front of me. I froze. The cat stood up as soon as it saw me and took a step forward. My immediate instinct was to turn and run, which I did. I had only gone a few steps when I looked back and saw it chasing after me and gaining quickly. The thought flashed through my mind: if I don't stop and face this thing it is going to attack me. I had to show it that I wasn't scared, even though every part of me was telling me otherwise.

"So I did what I never thought I would have the courage or instinct to do. I turned around, grabbed my bear spray, faced the lion with my arms spread wide and let out a giant roar. The lion stopped in its tracks just ten yards from me. Then we had a stare-down for what seemed like ten minutes but was probably more like 10-15 seconds. Neither of us moved as I looked into its dark eyes, hoping to intimidate it. The lion flinched, which reminded me I needed to do something or risk it making the first move. I again spread my arms as wide as I could and roared at the top of my lungs to seem as big and scary as possible. It worked. The lion turned and ran away, disappearing behind the rocks.

"I didn't waste a second to turn and run the other way, but my head was still turned to where I last saw the lion. I ran as fast as I could down the steep, rocky trail, roaring loudly and watching my back. I knew mountain lions are stealthy hunters so in no way did I feel safe yet. I feared the cat might have turned back in my direction looking for its next meal. The thought injected pure terror and adrenalin into my system as I sprinted rock-dodging and roaring down the trail.

"After several minutes I came to a spot where the trail turned through the woods back to the trailhead, but I wanted a more direct and open route. Too many objects for a cat to be crouching behind and limbs to be creeping on top of. Ahead of me the mountain side was grassy and exposed and I knew it would still lead me back to the homestead. So I took off over ankle-breaking rocks and a steep grade as fast I could. The hill seemed to go on forever. I spotted the roof of the cabin in the distance but I couldn't stop looking behind me every few seconds. I still let out a roar every now and then, picturing the cat crouched in the tall grass beside me, tracking my scent. I wasn't in the clear yet, and I wouldn't be until I was on the other side of the door of the cabin.

"I lunged forward clumsily over rocks and loose dirt. The cabin didn't seem to be getting any closer and I was getting tired, frustrated, and wobbly-legged with fear. I finally reached a flat stretch of land before the dirt road leading to the cabin. From the hillside it had looked like a short stretch, but at the base it seemed much longer. When I reached the dirt road I charged into a full-on sprint for the last 50 yards. I lunged up the stairs, barged through the door and bent over gasping for breath. I was safe. I was alive. But I nervously watched out the windows expecting to see the lion glaring back in at me."

The barest outline of the story was "leaked" to us by Katy's brother, who also lives in Montana, and suggested we might want to wait until the end of our trip, if ever, to get the first-hand account. It was a story too scary for comfort but too exciting not to tell. So on the last night of our visit, eating pizza in a Missoula restaurant next to a wall decorated with the hide of a mountain lion, she handed me three folded sheets of paper.

"Read this when you want to," she said.

I read it on the plane flying home to Memphis. My wife hasn't read it yet. Katy is off on a six-day float trip of the Salmon River in Idaho, in back country inhabited by elk, deer, bears, and mountain lions.