Another SNAFU at Beale Street Landing

The American Queen won't be docking at Beale Street Landing when it comes to Memphis Friday. Instead the luxury river cruise boat will tie up at the north end of Mud Island for the second summer in a row, as will other visiting cruise boats.

The mooring arms of the 400-foot dock at Beale Street Landing are being detached this week because of low water at the mouth of the harbor. The daily excursion boats can still use the dock. The U.S. Army Corps of Engineers is not dredging the harbor this year due to budget cuts.

Meanwhile, the Riverfront Development Corporation's contract runs out at the end of October. The RDC was on one-year contracts the last two years. The most recent one expired at the end of June — days before the big Fourth of July fireworks show on the river — so it was extended four months. Benny Lendermon, head of the RDC, said he is optimistic it will be renewed.

"We are in negotiations for a long-term contract," he said in a dockside interview Thursday.

The RDC is also negotiating with a restaurant operator for the landing after no bids were received following the broken deal with the previous operator. The new prospect is said to be Beale Street restaurateur Tommy Peters.

The $42 million riverfront project has been plagued with problems and controversy almost since its inception. Here's a snapshot history in Memphis Flyer photos.

The mooring arms raise and lower the dock, which consists of two 200-foot-long barges. They are being temporarily disconnected this week. The river is within five feet of a record low. Lendermon said it would have been possible but costly to design the dock for minus-15 feet on the river gauge, well below the record low. The RDC fired the dock contractor and a lawsuit is pending. 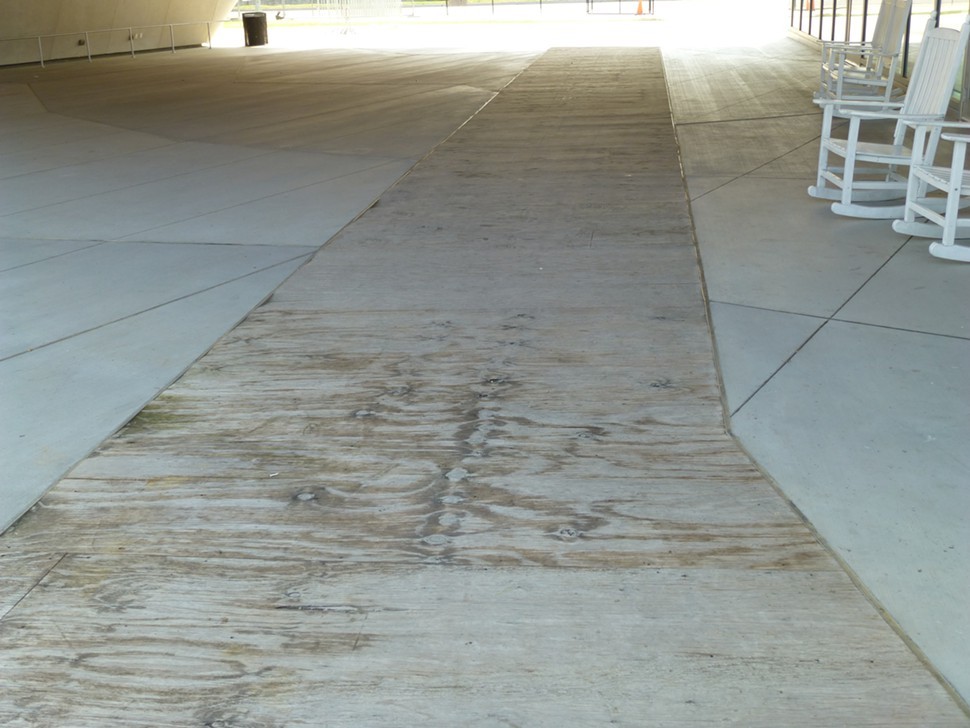 This plywood section of sidewalk from the shady space outside the future restaurant to Riverside Drive and Beale Street was supposed to be decorative tile. Another contractor screw-up.

Restaurant partners Charlie Ryan and Bud Chittom decided in May not to go ahead with a much-needed food and beverage oasis, one of the main reasons for building the project in the first place. Ryan says there is not enough parking. A venue for parties and special events is one possible outcome. The only business inside the building is a gift shop and ticket office for daily excursion boats.

The multicolored elevator shaft, also known as the Beale Street Landing Rubik's Cube, is the focal point of the project, to the dismay of some local urban design critics. It is supposed to represent . . . oh, never mind. It speaks for itself.

The American Queen, whose regular visits were supposed to partially justify the cost of Beale Street Landing, will tie up at the north end of Mud Island Friday, just as it did last June when the water was low. Passengers get a bonus tour of Mud Island and Harbor Town by bus or limo enroute to downtown and their hotel. Lendermon said the dock at Beale Street Landing could be back in business for the big boats before the end of the cruise season in November.

The black fence between the landing and the parking lot is supposed to come down within a week, making it easy for visitors to Tom Lee Park to climb the grassy hill to the top and the fine view of the river. It will also make it possible for some crazy vandal to drive up the hill. There will be a gate of some kind, like the ones currently in use at the parking lot entrances. As for the parking lot next to the landing, it is either not big enough (for a restaurant) or unsightly and unnecessary (design critics and proponents of a more pedestrian-friendly riverfront) because it separates the landing and the rest of Tom Lee Park.

So near yet so far. A decent high-school quarterback could chunk a football from the dock to the southern tip of Mud Island River Park, but, alas, there is no close connection. To get to both, you have to walk or drive to or from the Mud Island entrance either at the parking garage across from City Hall or the parking lot at the north entrance to the river park.

Jobs, as always, were one of the justifications for the project. Beale Street Landing was envisioned as a $20-$30 million project and grew to a $40-million-plus project. The grand opening date, pushed back several times, is some time in 2014. Will Memphians embrace it, or shun it as they did Mud Island River Park? Readers of this blog know I have been critical of the overdo, design, and buck passing, but the view is really nice, visitors won't care about the back story once it opens, and I hope it works now that we have it. See for yourself, but bring your own snacks and drinks.