If you’ll excuse me, the correct term was 'Stout Gelato,' served up on a warm, soft brownie, much to my delight.

Last Friday night, Halley Johnson and I had the pleasure of attending the Dixon Gallery and Gardens' aforementioned annual bash, Art on Tap. We sampled at least one offering from every vendor (food included), and each new venture did not disappoint. Right away we closed in on Cotton Boll Catering’s chicken tenders and fries, then began our tour with Budweiser Memphis. I chose the Lord Chesterfield Ale, a great go-to beer, then we moved right along to Bluff City Brewers and Connoisseurs, sampling the fragrant and delicious Rosemary Pale Ale and similarly distinct Ginger Summer Ale. Ghost River had their usual favorites on tap with an exciting new dark beer, Ghost River Black Magic — a gentle alternate to darker varieties. We took a break to brave the growing line in wait for Las Delicias’ scrumptious guacamole with their homemade tortilla chips, steak tacos, and tamales which we then paired with our old friend, Dos Equis Amber from A.S. Barboro. At the very end of the stretch on the driveway that led directly to the Dixon’s former residence was Bosco’s stand, where we tried my personal favorite of the night, Biere de Tonduese, and Biere de Garde(n), made specially for the event. Capping everything off with their homemade brownie topped with the stout gelato (shockingly good, no matter how it sounds) was quintessential.

The nice weather and ale were the perfect compliment to the Dixon's enchanting scenery and truly inspiring exhibits; Jean-Louis Forain’s “La Comédie parisienne,” and local artist Daniel Tacker’s “The City Loves You.” The Forain exhibit closes soon, on Sunday, October 9th, and for those who haven’t seen it (or read the many articles on it, including this one from Memphis magazine), the French Impressionist tribute is not to be missed. With a huge array of the artist’s works, mediums, and thematic interests, the Dixon offers a thoroughly educated and ultimately intriguing look at Forain’s personality and life in France as both a practical, yet talented etcher, and a skillful water-colorist and painter. Organized with much of the Dixon’s own collection in collaboration with the Petit Palais, Museum of Fine Arts of the City of Paris, the exhibit focuses on the artist’s preference for social satire and his fascination with the spectacle. A self-professed “painter of realities,” Forain was largely influenced by the Impressionist circle and also by poetry — a close friend of Arthur Rimbaud and Verlaine, among others — and became one of France’s best known and most revered artists of the time. 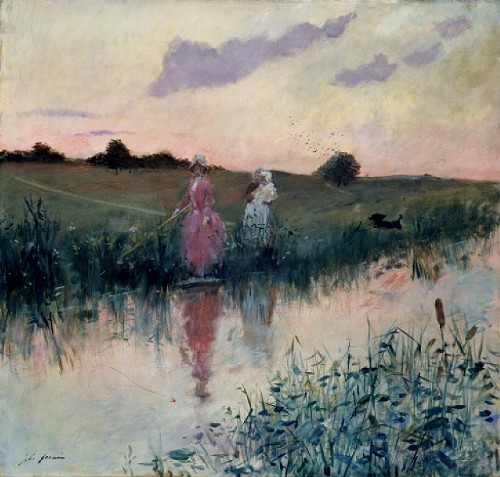 An unexpected bonus to viewing “La Comédie parisienne” is a complementary ticket to the Memphis Brooks Museum of Art’s exhibit on the Impressionist Revolution, “Monet to Cézanne/Cassatt to Sargent,” also open until October 9th. Combined with pieces from the High Museum of Art in Atlanta and also borrowed from the Dixon, the Brooks’ showcase seeks to encompass the entire movement, ranging from such celebrated masters as Renoir to contemporary American works.

“The City Loves You” exhibit runs a week further, closing on October 16th, and highlights the artist’s illustrative techniques as a graphic designer. Having shown work all over town, Tacker demonstrates a professionalism and high-polish to his decidedly urban compositions. Make sure to check out both before it’s too late, and buy your ticket early for next year’s Art on Tap.