The Politics of Inclusion

The illustrious Dwayne Butcher has a new show opening at the David Lusk Gallery tomorrow night from 6-8 p.m. Titled The Politics of Inclusion, the exhibition is a rather intimate exploration into Butcher's own perception, of himself and of the world, but particularly in how the world views the grand stereotype of the Southern, white male, struggling with his own inevitable shortcomings.

"I have always been aware of my weight and accent and the negative connotations that come with each," Butcher says. 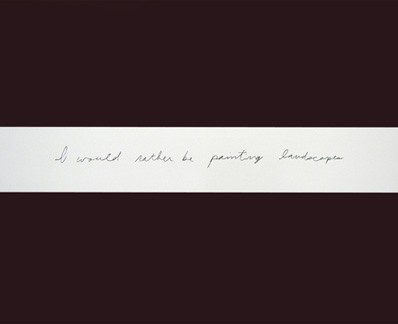 The work is the result of honest expression in which Butcher frankly relates his beliefs on art and life by embracing personal insecurities and generalizations. Through private understanding and doubt he displays a sort of living poetry with a variety of media; sculpture, text based installation, digital painting and video.

"I actually am a hillbilly from Arkansas with aspirations of integrating into the highbrow art world. Now, I capitalize on contradictions in pieces that counter my southern masculine roots. I use pastel pinks and baby blues, and feature gay men dressing in suits. I juxtapose classical music against a make shift pool in the bed of a truck and images of me consuming beer and wings. I'm attempting to construct a personality that lives between both worlds," he says.

The exhibition runs through March 31, but in the meantime, check out the latest installation of Caseworks at the Univeristy of Memphis before it closes on Saturday!

Butcher curates the space, and chose the work of Johan Gustavsson to showcase just outside of AMUM's main gallery. Gustavsson is a visual artist from Sweden, currently based in the Netherlands, who sees drawing as the central medium of his practice for its singularly intuitive nature. With a fascination in the notion of ugliness, he evokes the innocent honesty of childlike sketches, producing intriguingly simple works reminiscent of the human memory - loose situations that aren't entirely formed but still have visible boundaries and specific characters.