I am so excited that the 2012 election is over, finally. I, like Nate Silver, predicted a landslide victory for President Barack Obama. I was so sure of the incumbent winning, that I started looking forward to the 2016 election in October. Sure, Hillary Clinton and Joe Biden would make great candidates. But I think their age at the time of the inauguration may be a disadvantage now. I hope a woman wins in 2016, however (Amy Klobuchar would work). Can you imagine what Rush Limbaugh and the other rightwing wackos would do if a strong liberal woman were President for eight years after the black guy? Alabama would secede from the Union and become the country where the far right moves. Puerto Rico would then become the 50th state, that way we don’t have to change the American Flag any.

The Democrats will keep winning as long Republicans keep voting crazytown rightwing, God intended legitimate rape commenting Tea Partiers in the primaries. This is not a winning strategy and proved as much this week.

I can never tire of politics. It is just so much fun. So much fun that I hope it never ends. And in our world of instant gratification and immediate and short-lived news cycles, it never will.

With this spirit in mind and the resounding success that my The Politics of Art review is, let's keep it going by all attending the reception at the Art Museum at the University of Memphis (AMUM) tonight, Friday, November 9th, 5-7:30 p.m. AMUM is billing it as Two Thanks/One Event, a chance to see the 11 Septembers installation of Jan Hankins, today happens to be his birthday, and to give thanks to Andrei Znamenski. Znamenski is a Professor of Russian at the University of Memphis and translated the Russian Propaganda prints that are a part of the Hot, Cold, Cool exhibition. The event is free and open to the public and all the current exhibitions at AMUM will be open during the reception. 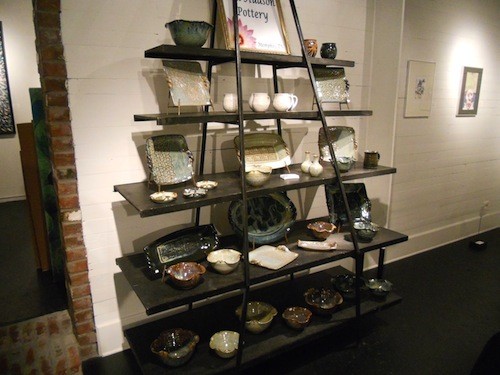 Just like political seasons, it seems the holiday season starts earlier and earlier each year. Costco had all their holiday stuff out well before Halloween. The department stores should just start in July when Lifetime begins showing all those Christmas in July movies. With the holiday’s come the holiday markets and craft sales. Gallery 56 is having its first annual Crafts Exhibit and Sale. It runs today and tomorrow only 10-5 p.m. So go early and by often. This is work by local artists, Bryan Blakenship, Niles Wallace, Nancy White, and others, go support them. Keep your money locally and out of the department stores. If you do not see anything that piques your interest here, don’t worry, this is the first of about 50 upcoming holiday market exhibitions over the next six weeks.