Opening This Week: Art of Science and more 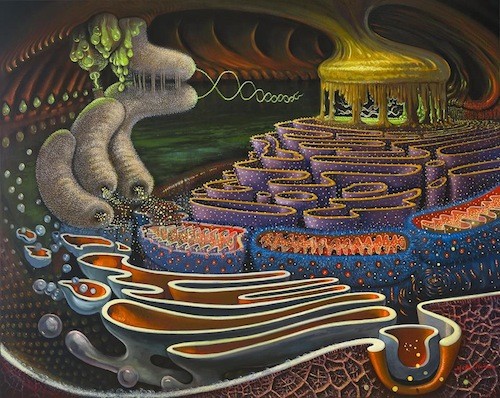 Matthew Hasty, a landscape painter and featured artist in this year’s Art of Science exhibition (opening Friday at Hyde Gallery), has no idea what cell mitosis looks like up close. His painting, The Echoes of Pneuma, would flop in any science fair, due to its imaginative take on cell walls (Hasty: “I used beef tripe for reference”) and inclusion of some antediluvian forms that seem, at best, misplaced in the cell world (Hasty: “...those parts kind of looks like Grover?”)

It’s a good painting, even if (actually, because) it makes a human cell look like a Dantean underworld. For the hard science side of things, there’s Dr. Sharon Frase, an electron microscopist whose research was Hasty’s inspiration.

Frase and Hasty will both be on hand at this Friday’s opening to answer questions and talk about their work.

This is the third year that St. Jude has put on the Art of Science, a project that partners local artists with St. Jude’s scientists. This year’s pull includes video installation, dance, clothing design, painting, sculpture, and graphic art.

Melissa Harris, the exhibit’s curator, explains, “We invited artists to St. Jude to see a slideshow of images from scientists, and they were able to select images based on what they were interested in. The artists and scientists interact at various levels. Sometimes the artist will go into the laboratory; sometimes the scientist will come to the artist’s studio.”

Heather Smallwood, the co-founder and president of the project, says, ““We’re hoping that it will be thought-provoking in many ways. We want people to come away interested by both the art and the science.”

Also this Friday, Lester Merriweather will be exhibiting the first installment of his show "Black House/White Market," at TOPS Gallery.

Merriweather, the curator of the University of Memphis’ Fogelman Gallery, has developed a series of large-scale collages. The collages pose magazine clippings of eyeless pop goddesses, jewels, gold watches, chains, and other celebrity ephemera against bleak grey canvases or spotless plexiglass.

In some of Merriweather’s works, the magazine clippings are arrayed into patterns reminiscent of French wallpaper. In others, they are placed far apart and the balance of the pieces hangs in the vast empty space of the canvas.

Considering its scale and pop subject matter, this first installment of Merriweather’s work, "Black House," is strikingly restrained. Merriweather manages to make all the glitter and the glare look ambient. This is a result of what the artist calls his “largely intuitive process” (a clean hand and a keen eye for pattern.) It also may be a reflection of this decade’s underwhelmed sense of fame, the artifacts of which are a kind of twerking-centric white noise.

Additionally: Craft enthusiasts should note the opening of Studio Nysha, the school/exhibition space/studio of Nysha Nelson, a Bartlett-based quilter. Studio Nysha opens this Friday with works by international quilters.

Nelson, who used to live and teach out of Somerville, TN, is an enthusiast of “free motion quilting”, in which the quilter is in control of a free-form quilting line.